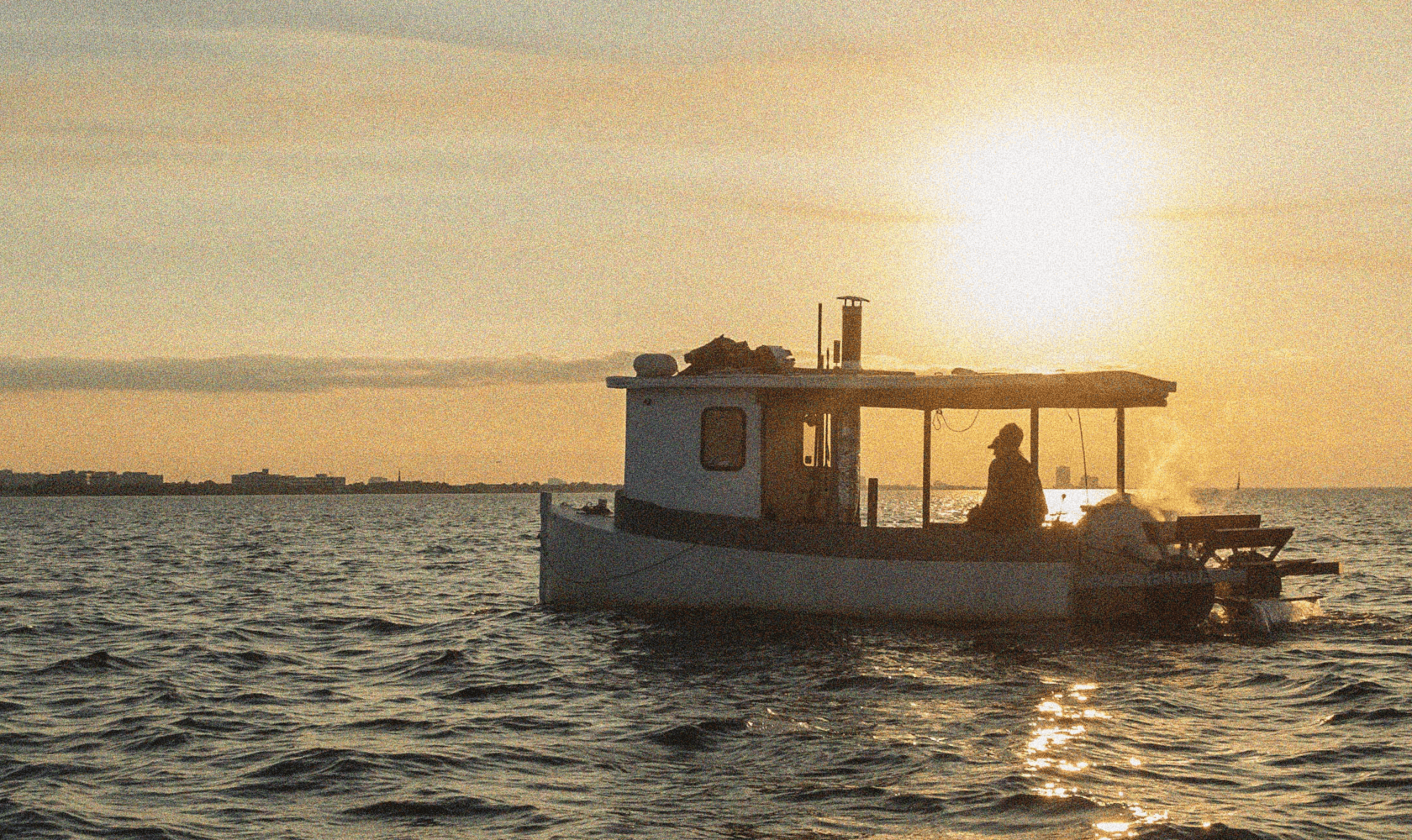 According to Mark Twain, no man can tell the Mississippi River what to do, where to go, or to leave some of the letters to the rest of us. The floating diarists Maxime Berthou and Mark Pozlep had sailed from France to Scotland in the Hogshead 733 project, and on September 2 they set on a journey that took them from La Crescent, Minnesota to the Gulf of Mexico, passing through the states of Wisconsin, Iowa, Illinois, Missouri, Kentucky, Tennessee, Arkansas, Mississippi, and Louisiana.

This was not an ordinary journey, Max and Mark explain: “Our goal was to research and experience contemporary U.S. society along the mythical river. Following the methodology and chronology of a research-action project, Southwind proposed an investigation into personal experience, transcription, disproportion and the production mechanisms of an artistic project.” 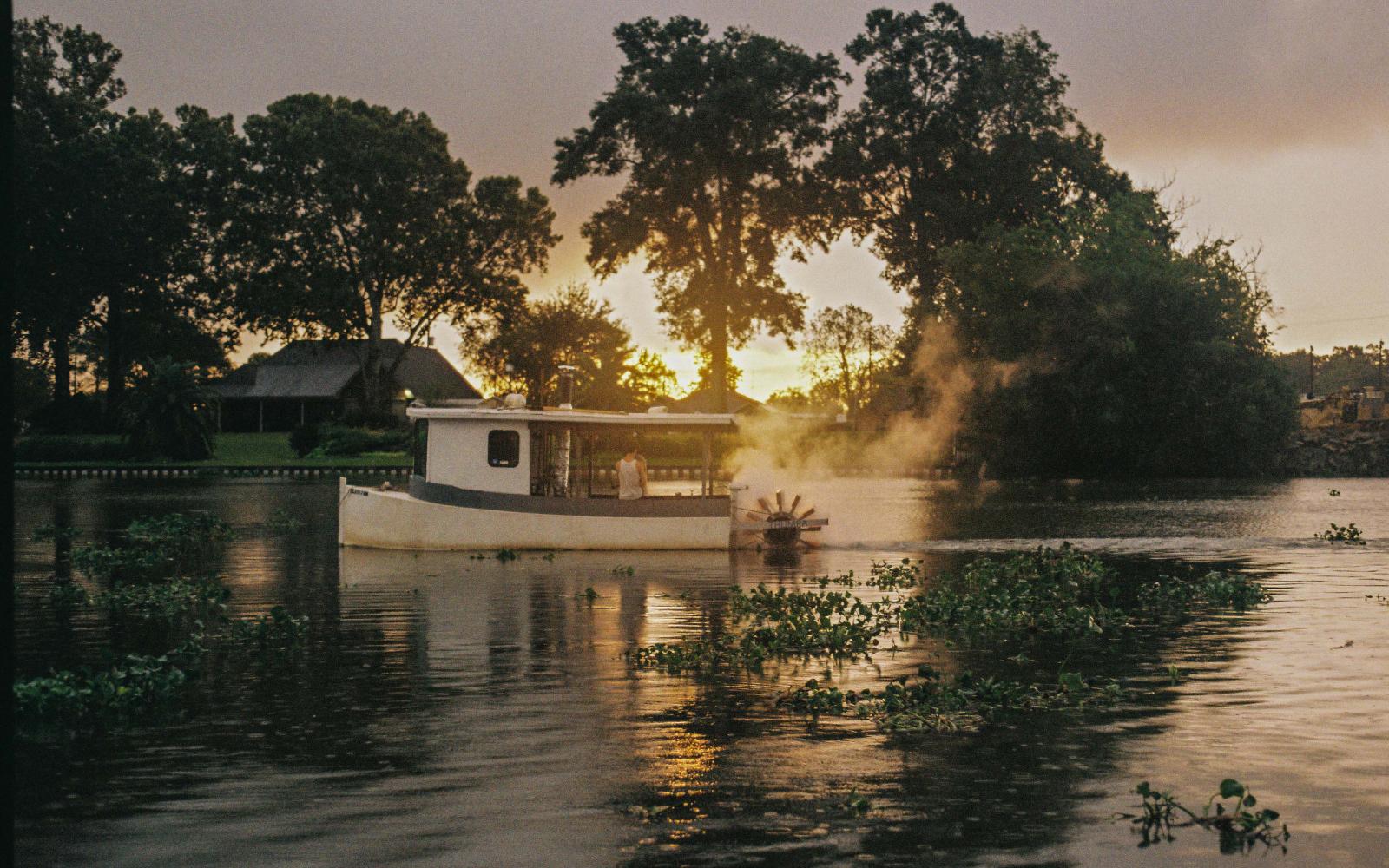 The 1712-mile journey took them 50 days after they’d been preparing for two years.

Many towns by the river were flooded, some of them literally flushed away. 2019 saw one of the biggest flooding in U.S. history, which forced Mark and Max to find new routes through the riverscape transformed by a disaster. They could find certain spots on the map, only to realize they no longer exist in reality. Many people had to flee, leaving empty houses and past lives for looters to discover. Those that remained had unbelievable stories to share.

The Little Steamboat That Could

The 21-foot boat was like a tiny spaceship in the vastness of the River. So light a pickup could tow it, yet strong enough to defy the gods of Mississippi. But why steamboat?

“To be able to embark on an action-research travel and to guarantee ourselves interest, meetings and trust with local inhabitants in such a short period of time, we needed a specific vessel which has a long and important position in American history. We have decided for a steamboat, one of the first machine powered transportation vessels on the Mississippi river, romantically praised in so many Mark Twain’s literature. It was self built in Maine by a deceased gentleman. He built it with a wish to travel the Mississippi river.” He didn't, but Mark and Max did. 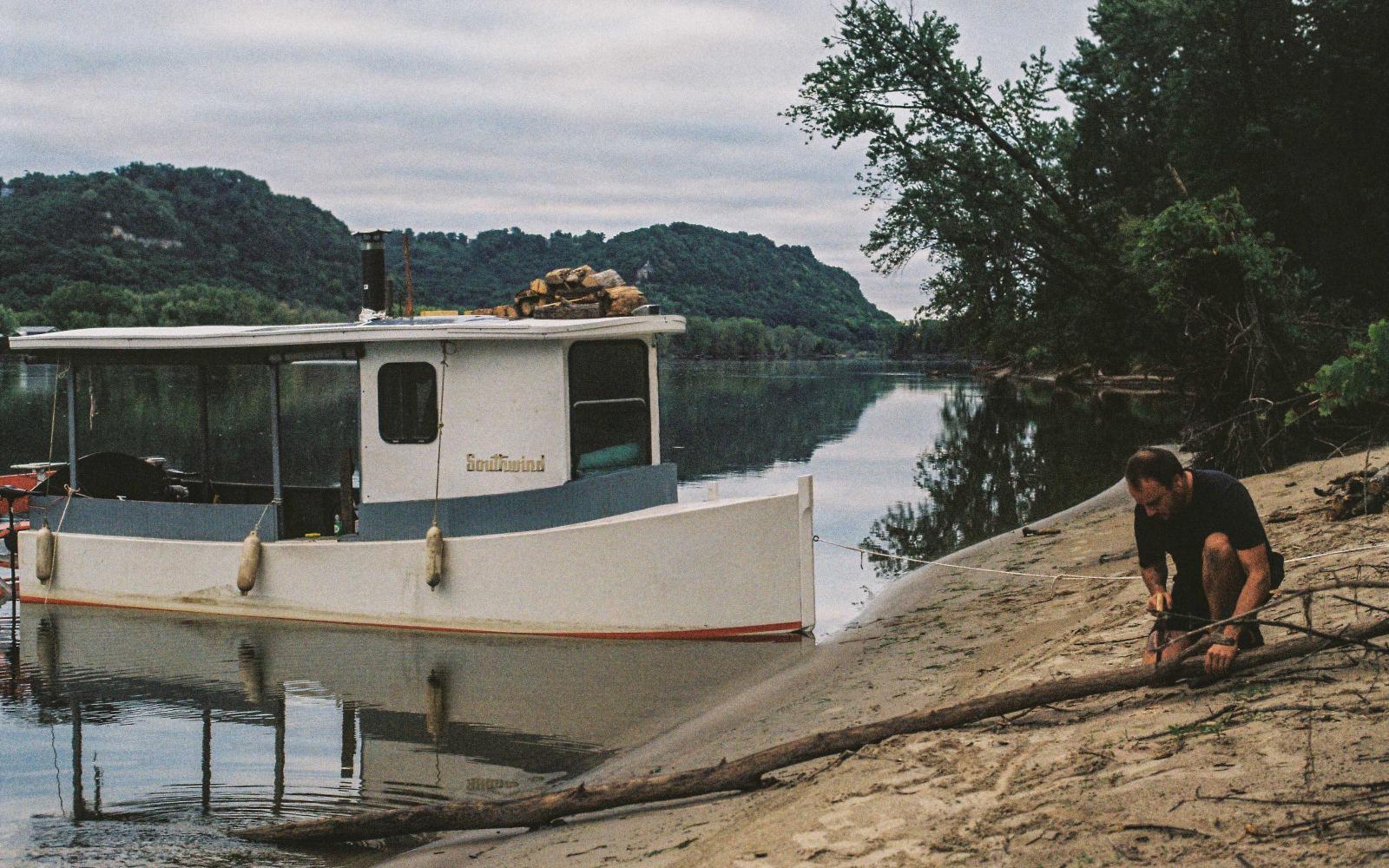 Its heart was a relentless and capricious steam engine that threatened to blow up the moment the distracted sailors let the pressure go beyond 160. It was the alchemy of elements that moved the vessel: “The boat is steam powered, burning wood to make the pressure turn the big back wheel. In order to feed the boiler we had to stop every day to fulfil the boat, mostly cutting and collecting driftwood on no man’s land.” 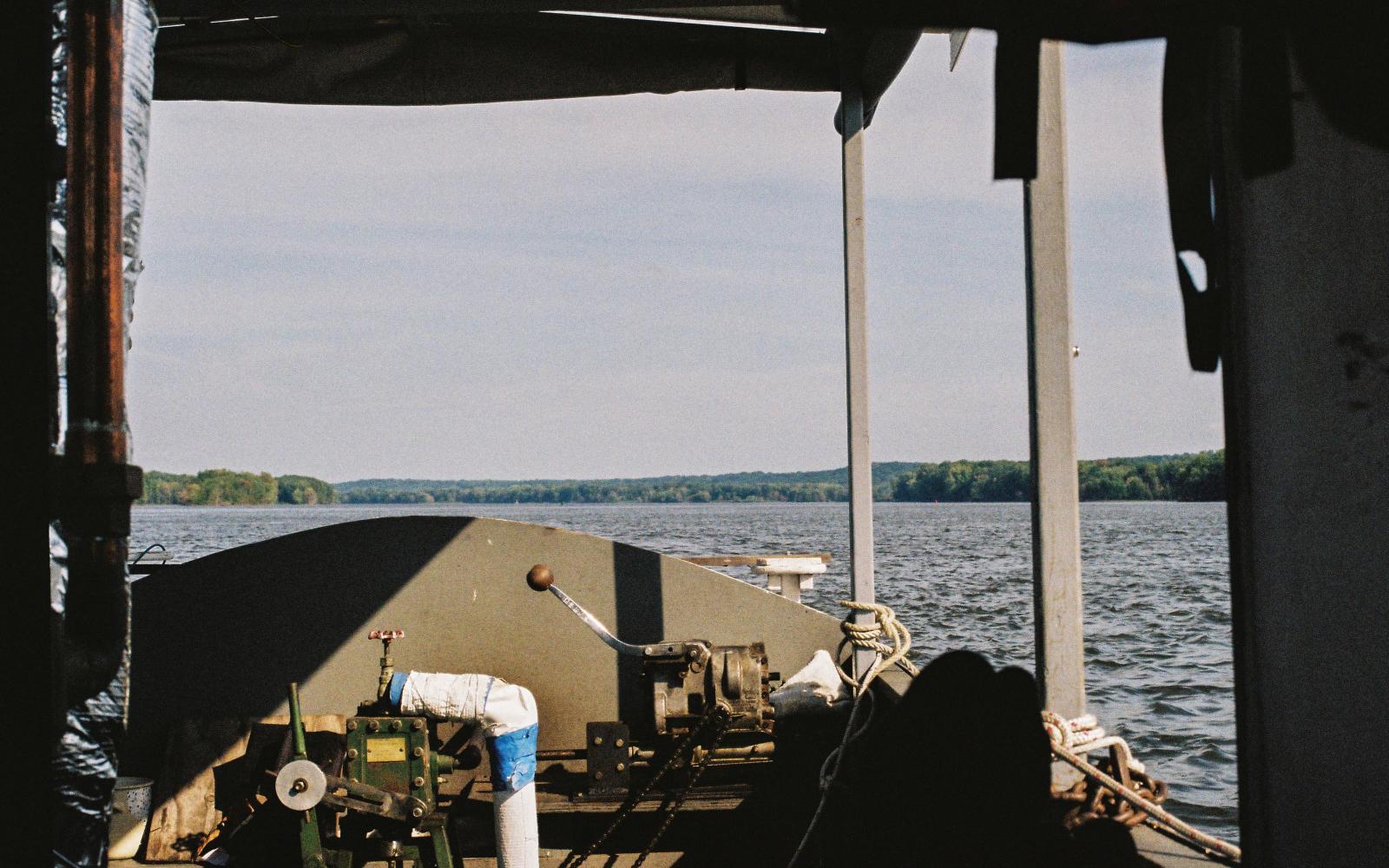 The steamboat would reach up to four miles per hour (or 3.5 knots) and helped its captains break the ice when fishing for new stories. Like a buoyant Trojan horse, it sneaked into guarded and suspicious communities along the River and revealed two curious Europeans with thick accents. Who wouldn’t like to talk to them?

“The endurance performance through the river is in itself an exercise in thinking-as-storytelling, relating to existent characters from the river with our personal fears and dystopian thought. What is our position as fictional characters in our own story? Depiction of it is not a mere portrait of the river, but also a reflection of us as human beings surviving in times of despairs and at the same time in search for a romantic experience fulfilled with beauty of nature and heroic reminiscent of the past. Almost all the people that we met on the river shared a sparkle of a wish to travel the Mississippi river once in their lifetime. The reality is far from romantic.”

Never against the grain

The Cherokee considered corn to be the staff of life, and there’s literally tons of life in America. Almost all of the American corn comes from the vast plains of the Midwest, which is cut in half by the Mississippi River. 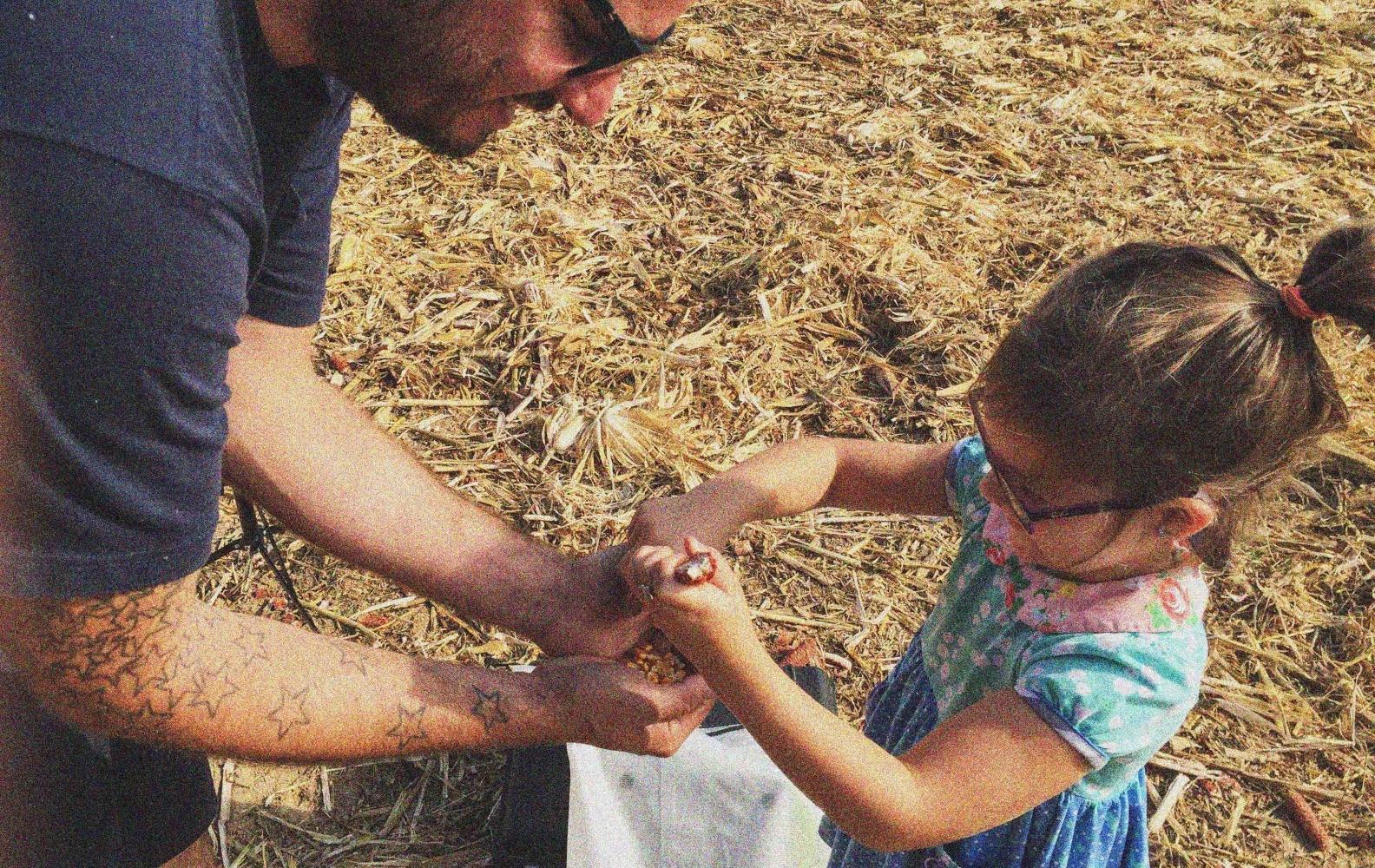 “The pretext of the trip was to collect corn from the local farmers in ten different states that we traveled through. Production of corn plays a major role in the US economy, most of it goes for ethanol used in oil industry and its production deeply affects the Mississippi river,” explained the sailors. 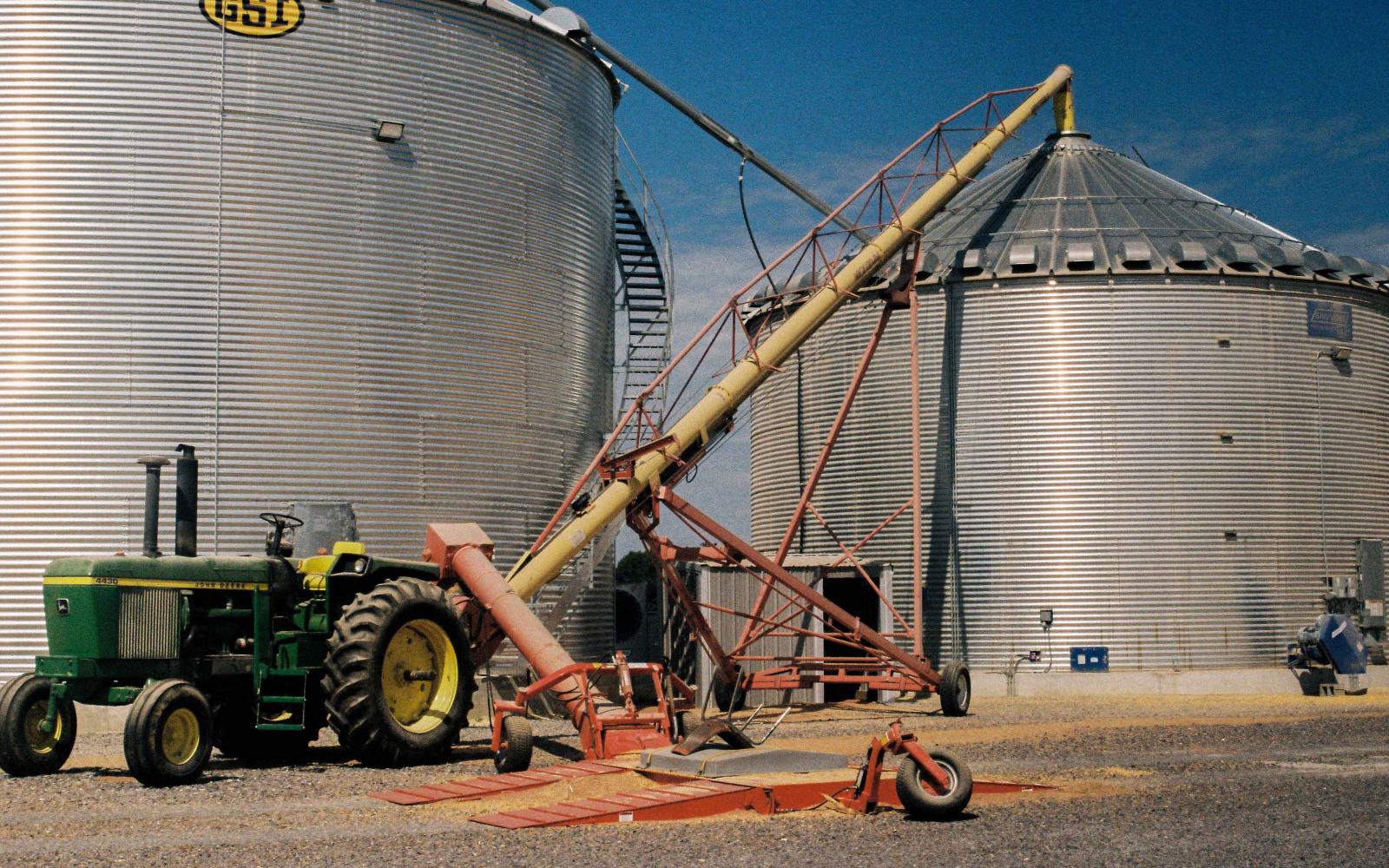 What used to be the food of the nation is now mostly processed into animal feed and Spirits. Mostly Bourbon, but sometimes - Moonshine.

Salt of the earth

There are no stories without people, and along the way, Mark and Max met a colorful bunch of characters; from old cowboys to bookish mercenaries.

“Through our durational performance we had encounters with farmers, fishermen, victims of the floods, people who have lost their family, dreamers, professional assassins, junkies, children of the future, prisoners, intense racists, guardians of the frontier, ... For them, the image of the boat could present an endurance, an adventure, a dream coming through or a complete nonsense action. For us it was an entrance ticket into their world. We were there to dialogue with them and hear their stories.” 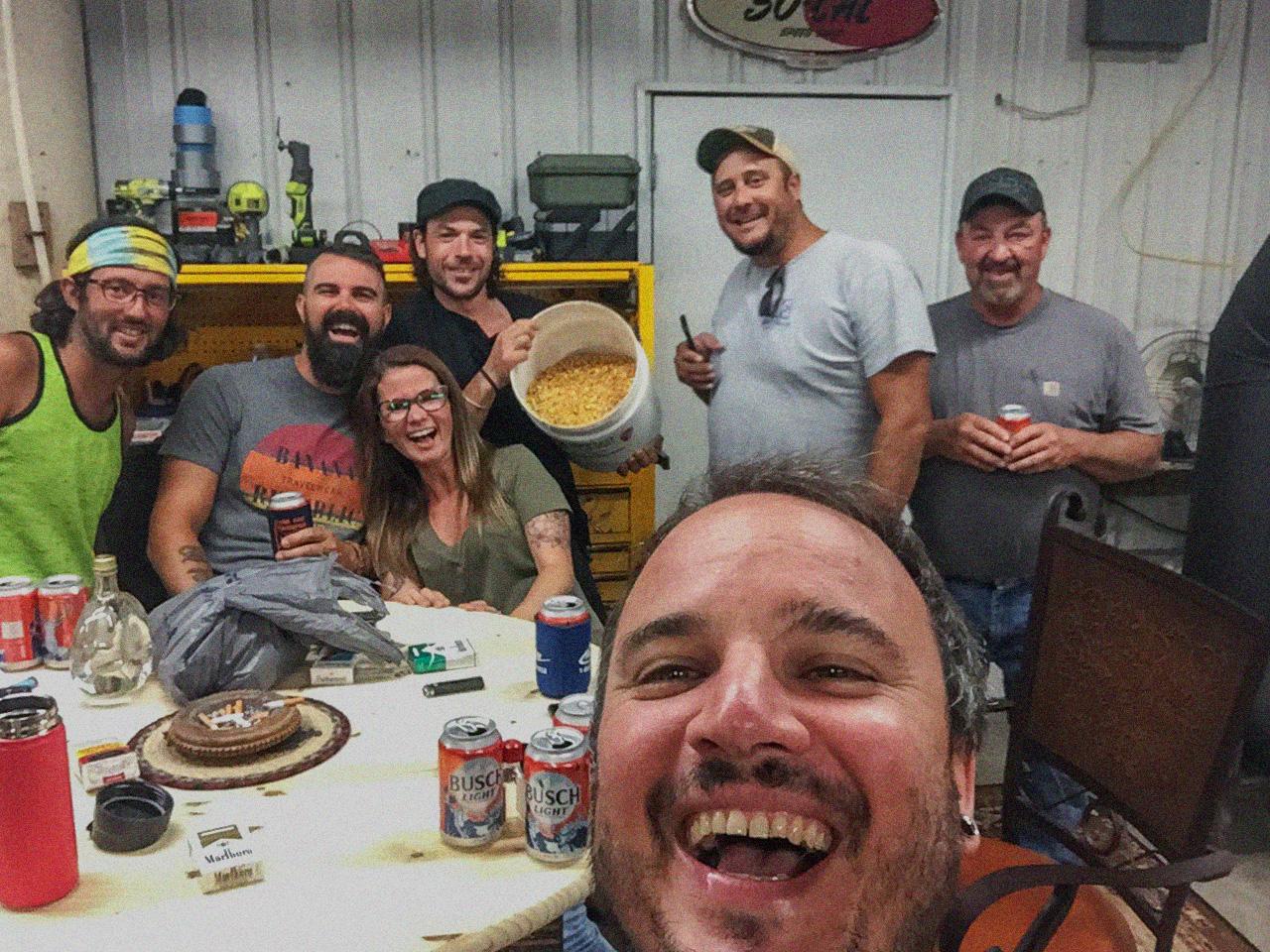 Big white beard, a cowboy hat, and a ponytail were the trademarks of Jim, singer, and owner of an antique shop. He led the visitors through the hodgepodge on sale up to the roof where a bonanza of veggies and herbs grew. He gave them fresh tomatoes and frozen pork before he announced he’d be meeting the duo next morning for coffee and life tales. 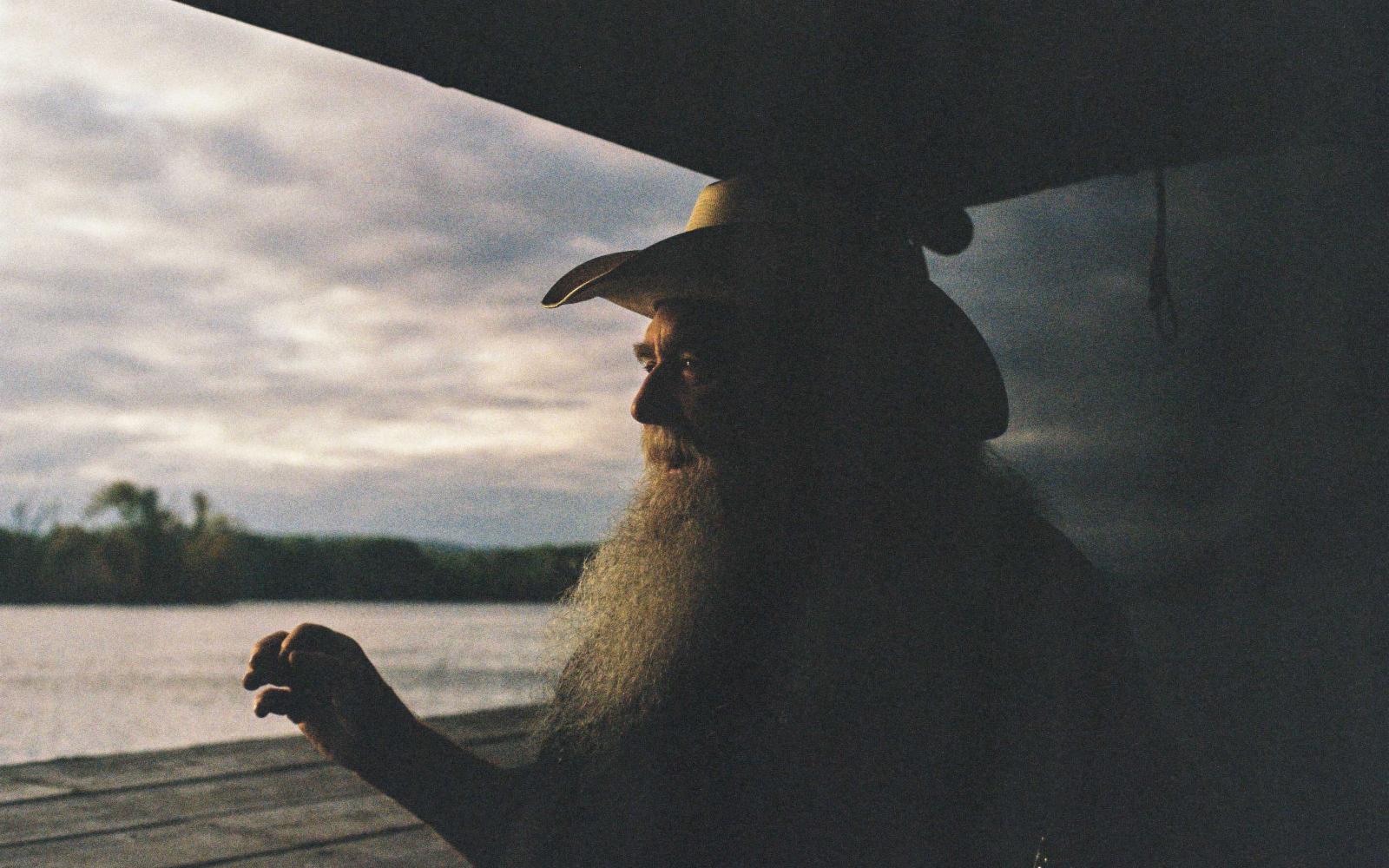 The abandoned marina behind the sign that demanded drifters to keep out, was patrolled by a diligent lawman. Well, a law-boy, since he wasn’t even ten. He told Max and Mark he was an officer of the law and demanded obedience while he searched and thrashed around the boat. The artists decided to return to the river as the law-boy stood on the bank, smiling victoriously. Nobody messes with the Kid Officer.

High tales or honest-to-god truth, he was a mercenary, he was Opus Dei, he was a Knight Templar. What was certainly real was the AK-47 surrounded by a Glock, a shotgun and an RPG. Black Sabbath riffed as he offered an open bottle of a $1200 Whiskey. He displayed a rare edition of Paradise Lost and a bundle of Cambodian currency. A mysterious man with stories to tell – but then, he’d have to kill you. 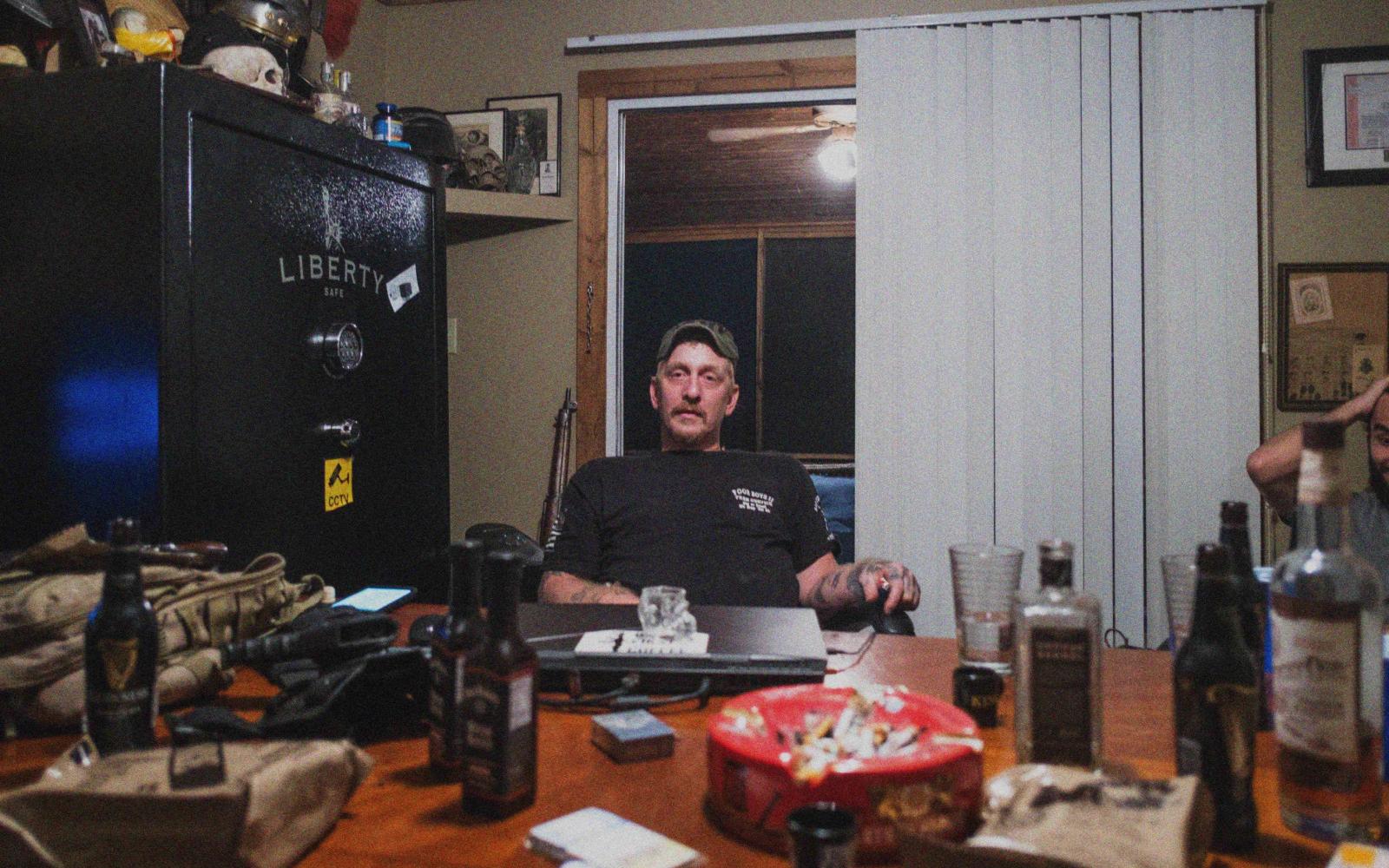 Meet others as well in the project Collected Data.

The Spirit of America

When the boat moored in the Big Easy, it was turned into a floating distillery. The 42 sorts of corn were slowly turned into Moonshine. Moonshine! The Spirit of rebellious moonrakers, the homebrew that indirectly brought about NASCAR. What could be more American than a Spirit that carries the essence of ten states?

“Moonshine is a clear, unaged Whiskey. The mythical spirit from the era of prohibition that was illegal until 2012 and is now becoming part of the American national identity and history. It is made completely out of corn and its production is the same as production of ethanol. Together with Erik Morningstar, master distiller at Seven Three Distilling, we have produced 2000 bottles of Southwind Moonshine. Every bottle contains the spirit of the Mississippi river.” 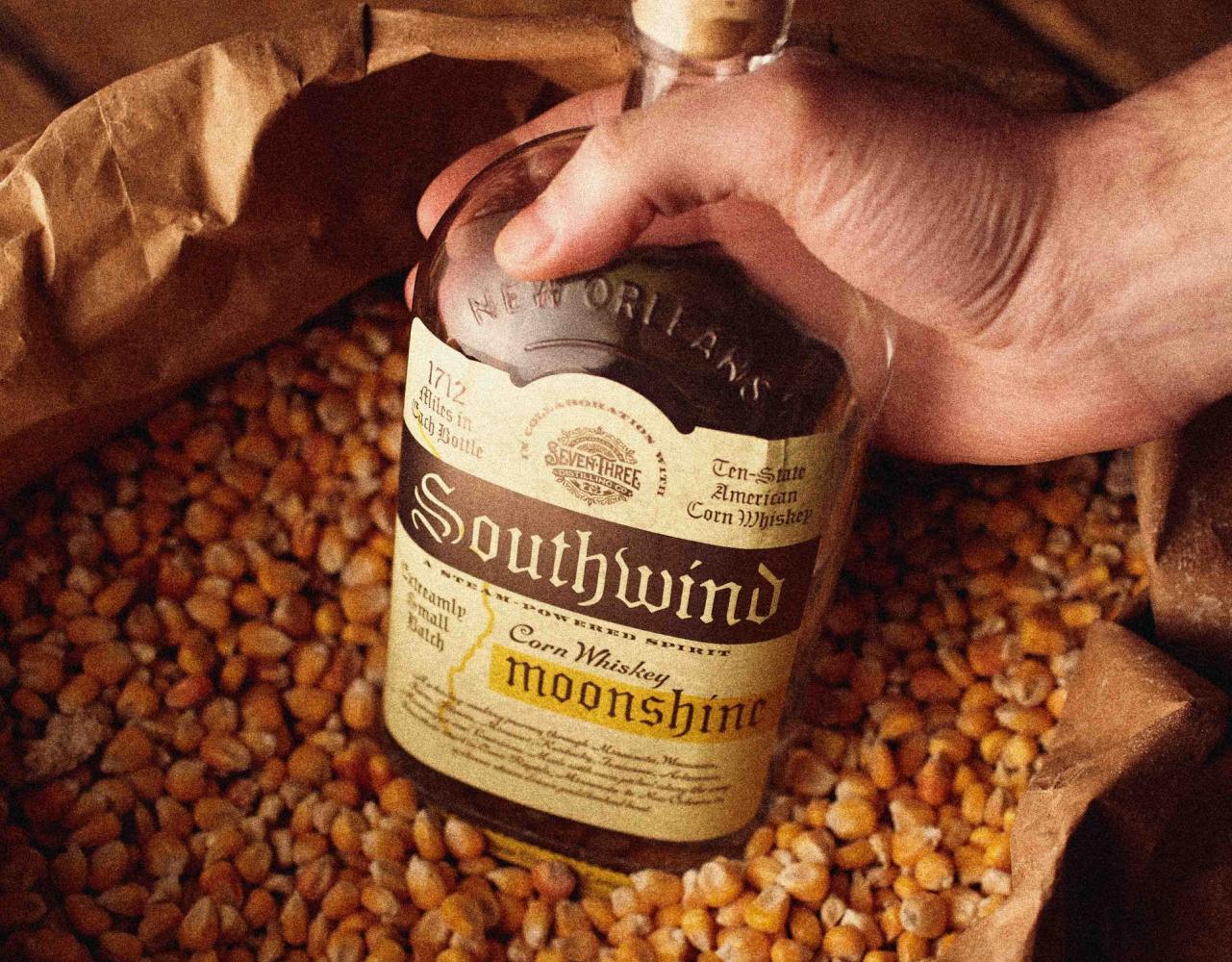 Capture the Spirit of America

Own the Moonshine that carries incredible stories of the Heartland. Take your senses on a boat trip down the Mississippi River. Rediscover America with your palate.

Only 950 bottles available in the US, exclusively at Flaviar, so act quick!
Read more about:
Published Jan 30th 2020
By Saso Braz