What's in an Age? At Knappogue Castle, Quite A Lot 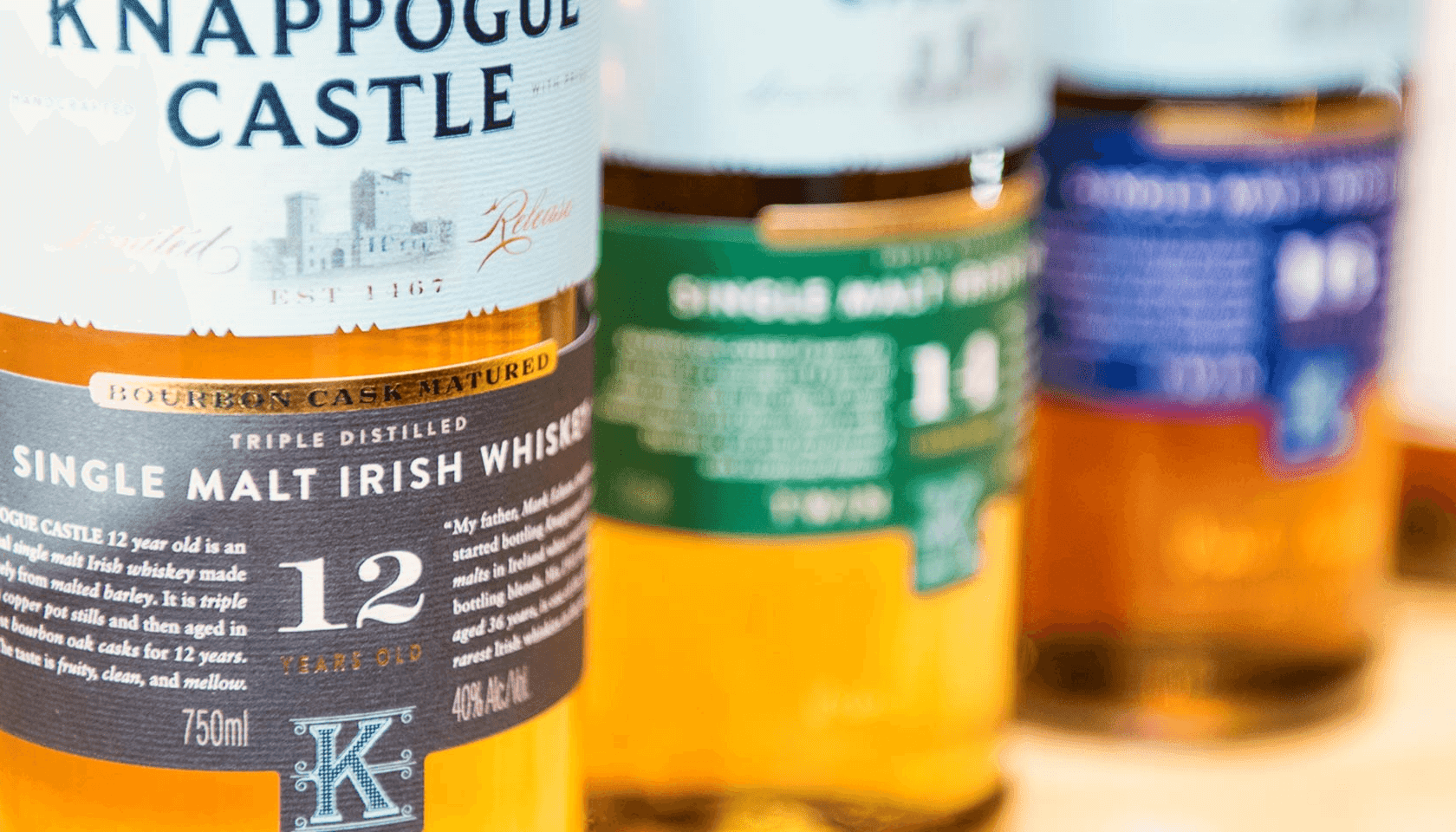 Age ain’t nothing but a number. You’ve heard that old trope a time or two.
So has the crew at Knappogue Castle. Except when it comes to their Irish Whiskey, these blokes would strongly beg to differ. See, they’re one of the only single malts on the market right now that only make age statement Whiskeys.
And that’s quite a commitment. As Tony Carroll puts it, “it’s [not only a] commitment to the market, but also, a commitment to ourselves, that we have and will continue to produce 12, 14 and 16 Year Old Whiskeys.”

Who’s Tony? He’s Castle Brands Spirits’ European sales manager, and an Irishman who’s proud of his Whiskey (namely Knappogue Castle, but he’s got plenty of love for his Whiskey brethren, as you’ll soon see). We sat down with this intrepid flavor explorer to get to know this one-of-a-kind age statement Irish Whiskey and what’s the future has in store for it. 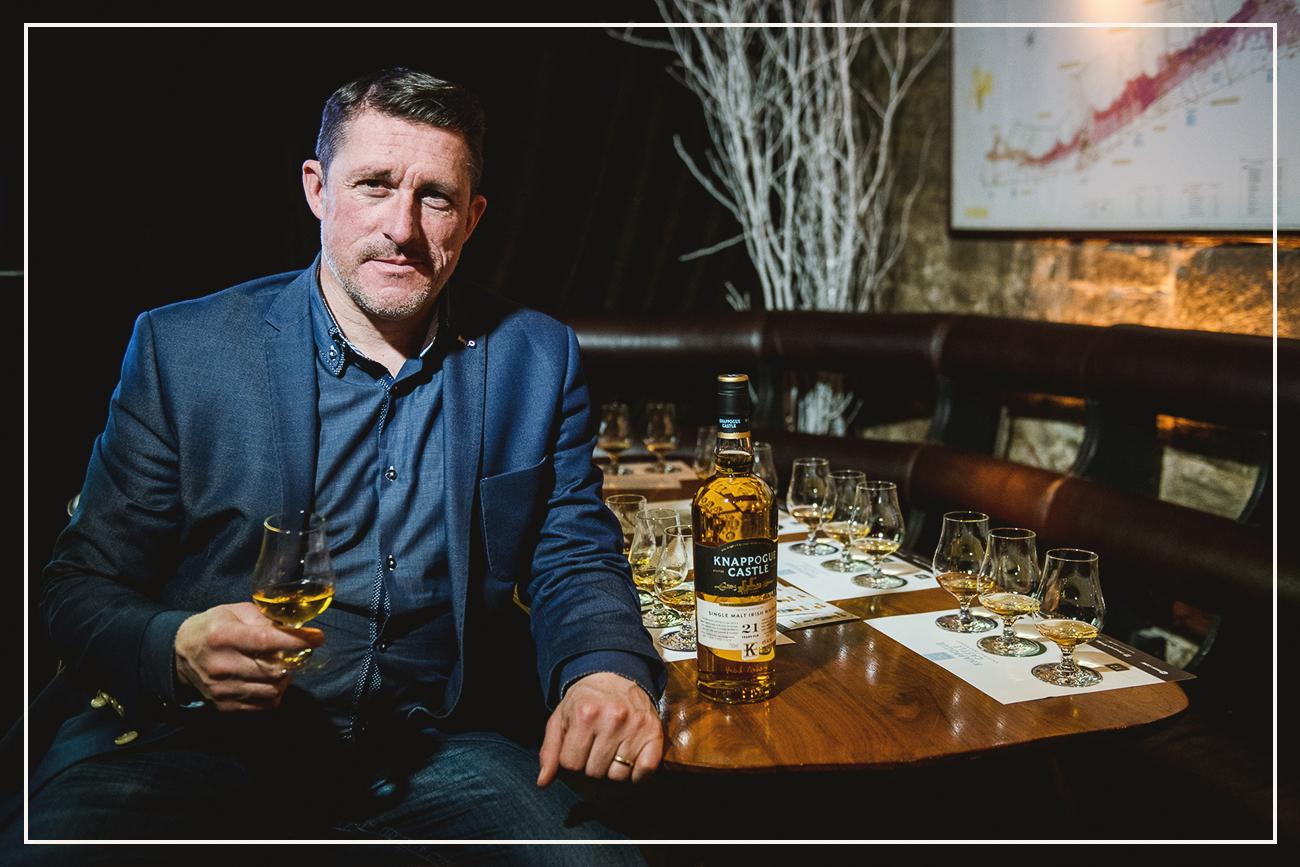 The name is no misnomer. The eponymous castle was built in County Clare in 1497 by Sean McNamara. Fast forward to 1920, and the once-great castle had definitely seen better days.

Enter: an enterprising Texan by the name of Mark Edwin Andrews, who purchased and restored Knappogue Castle.

“He actually went on to develop it and restored the castle to what it is today. Which is absolutely beautiful. But [Mark] was a very, very shrewd guy,” said Tony, “he actually started buying casks and barrels of the finest Whiskeys across Ireland from many of the distilleries that were still open at that time. And he started building up his connection."

"He was aging and bottling the brand under the Knappogue Castle brand itself. And one of his last and most famous batches was actually the 1951, which was matured for just over 36 years. That 1951 is still widely recognized as one of the best commercial Whiskeys on the market.” 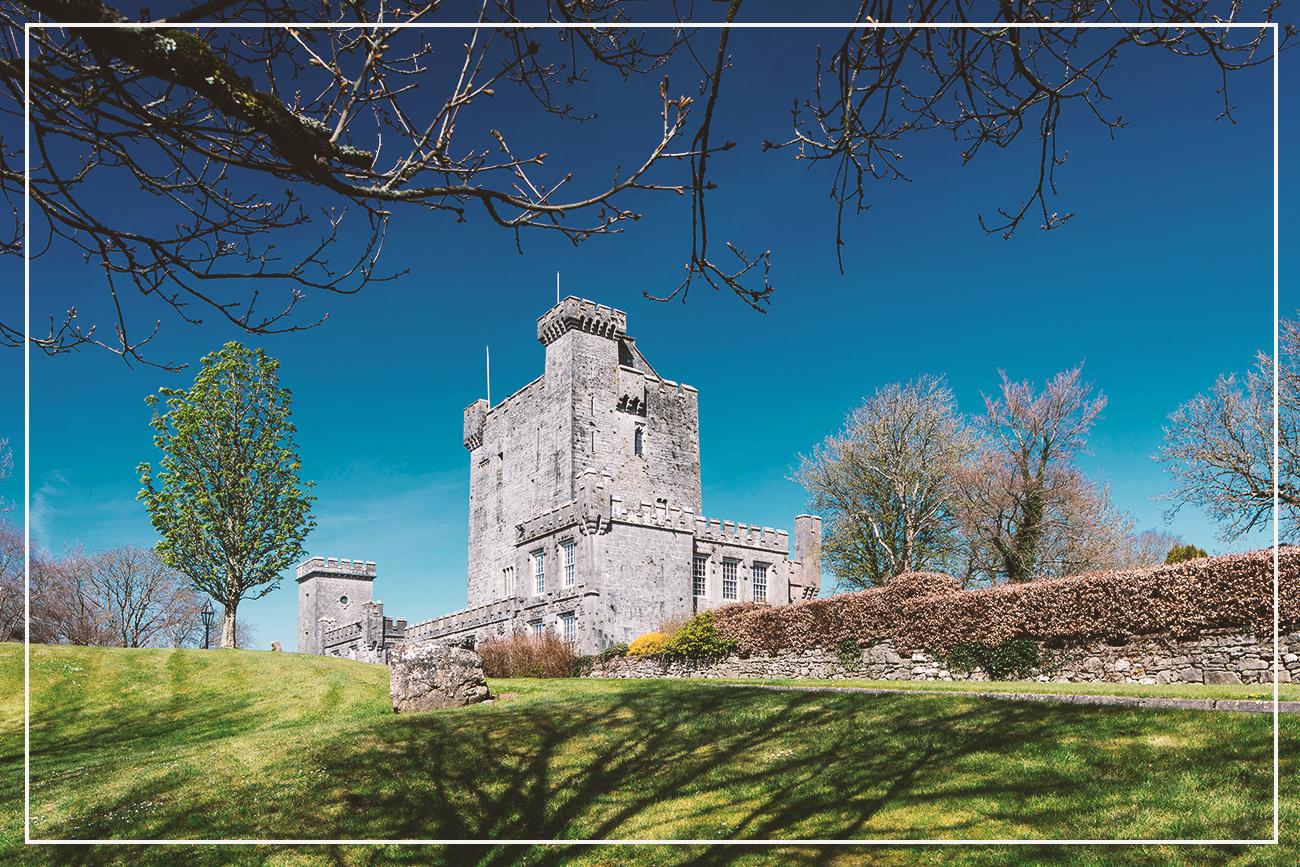 And today, the Andrews continue to be involved in the business.

“This is a fabulous story because the story continues and again, it's just so Irish, it's phenomenal. Like, we have Mr. Mark Edwin Andrews' son, who's Mark Edwards, III. He took up the baton of Knappogue Irish Whiskey and continued to drive and develop the brand and his father's legacy throughout America and around the world. At the very bottom of each bottle, you’ll find Mark Andrews’ signature.”

One of the most refreshing aspects of our conversation with Tony, was how readily he embraced the new players in the Irish Whiskey field along with his reverence for some of the bigger distillers. He likens it all to the fighting Irish spirit.

“As you know us Irish we love to talk, so when we get an opportunity to talk about Irish Whiskey, it's a match made in heaven. The Irish, we're a rebellious lot. You can just ask the Scottish industry there, we were dead and buried as an industry and as Irish Whiskey in general."

“I came from Heineken, where the battle on a day-to-day basis with your competitors or Diageo's etc., was quite aggressive and there would never have been a huge amount of love lost between any competitors." 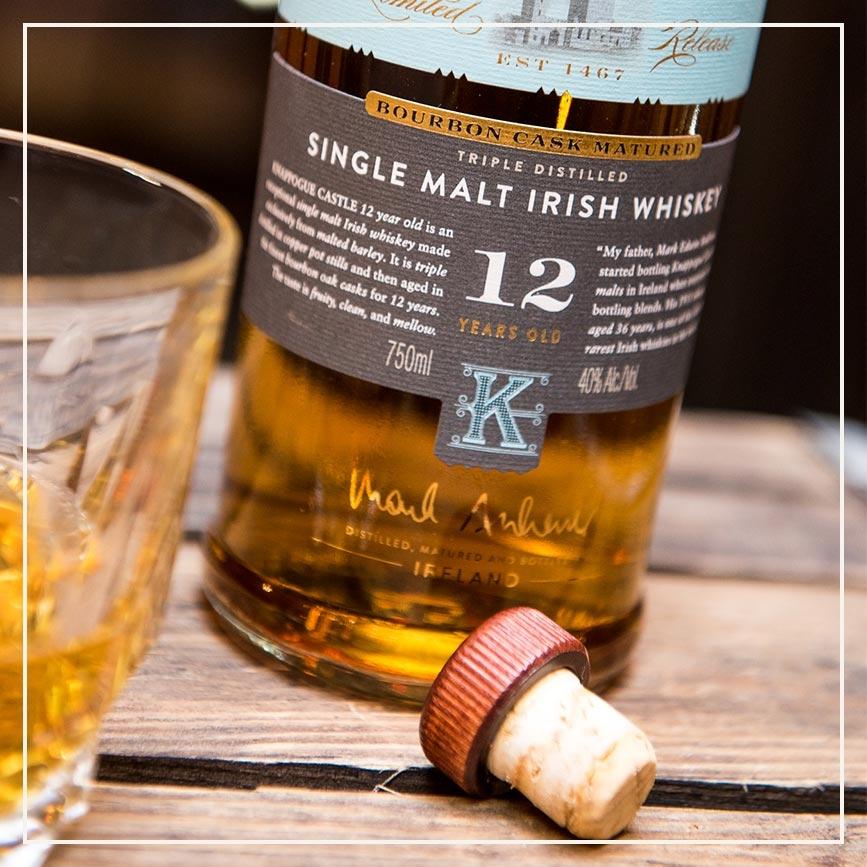 "But it's quite the contrary for the Irish Whiskey category, where everybody likes to help everybody. We all want to grow, and we all want to have a very, very clear picture of what it is that makes Irish Whiskey. Right now, there's a very, very good sense of community within the Irish Whiskey category. I suppose if there was any downside to us, it is possibly questionable whether all the brands will remain going forward in such a competitive market. But you know what, the world is a big place.”

Looking beyond the front row

Quick: name the first Irish Whiskey that comes to mind. Bushmills? Jameson? We don’t blame you. They’re two of the most famous blended Whiskies out there.

But Tony is betting that curiosity will get the better of most Whiskey consumers.

“Jameson, Bushmill, Tullamore Dew—everybody knows those. Anybody that goes to any Irish bar, any mainstream bar in the States, or that goes through an airport, sees those Irish brands constantly. And they're fabulous brands. But what eventually happens is they become curious to see what else is out there."

"What's behind the front row of brands that we know have got big budgets and big exposure. That's where you're gonna find the Knappogues of this world. Knappogue, obviously, its most defining character is that we are one of the only single malts on the market right now that are exclusivley staying with an age statement."

Today, Knappogue produces its Whiskey in County Cork, from one of the largest and best Whiskey producers in the world of Irish Whiskey. They have a long-term 20 year contract on their 12, 14 and 16 year old expressions. And they each have their own signature taste. 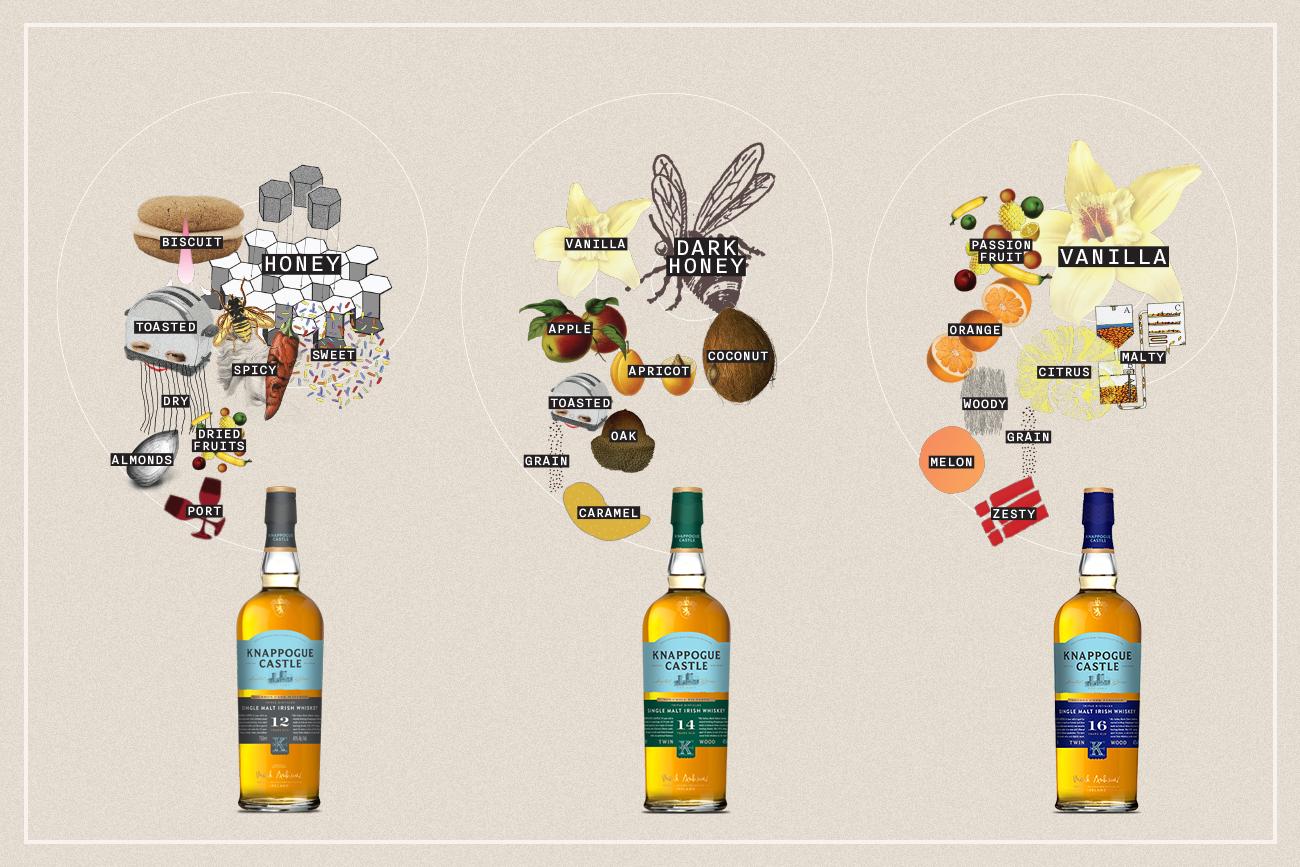 "Starting with our Knappogue 12 Year Old...straightaway on the nose, we've got that real rich biscuit-y, pepper-y spice. Mid-palate, it's very fruity, with spice flavors and a really smooth finish. Knappogue Castle 12 is without doubt your starter or for the beginning of your meal. For me, a really good quality bread—sourdough, French baguette with the biscuity notes— and the fruity mild flavors are absolutely heaven for the Knappogue Castle 12.”

“If I was to move on in the sense of a dinner, I'd actually go straight to the Knappogue 16 Year Old. I would have that with my main course, which would be a ribeye. I'd have that rare—with the smoky flavor of the meat mixed with the real maltiness and the vanilla tones that come from the K-16. Also, the K-16 is finished in the sherry Oloroso casks. So with the Oloroso coming through, the smokiness from the rib eye and then the maltiness and the vanilla from the Bourbon barrels, you've got that fabulous exposure to the meat and to the Whiskey. That would be the ideal main course for me.”

What does the crystal ball hold for Knappogue’s future? We asked Tony to take a peek and fill us in.

“We're actually moving on to releasing a 21 Year Old this year. Unfortunately, I have no tasting notes, so I can't really express much interest or much detail on that just yet but that is underway as well. It will be in America this year and in some of the international markets.”

We're actually moving on to releasing a 21 Year Old this year.
“We are also laying down more of our 12 Year Old and 14 Year Olds that have been aging at the moment. We’re trying to push out to later stage releases, so maybe more 18, 20, 22, etc. Right now, there's a race to the top to see who can have aged Whiskey for as long as possible."

"We have the European and American market contained with aged Whiskey, I would say, but when we look at the Asian markets, they have a big requirement for our aged product. We're very lucky—we're already at 12, 14 and 16, so it's not a huge requirement for us to maybe hold on another three to four years and push some of our brands out. That's what we're going to do. We bed them down, we keep our patience and hopefully, the age statement Whiskeys will continue.”