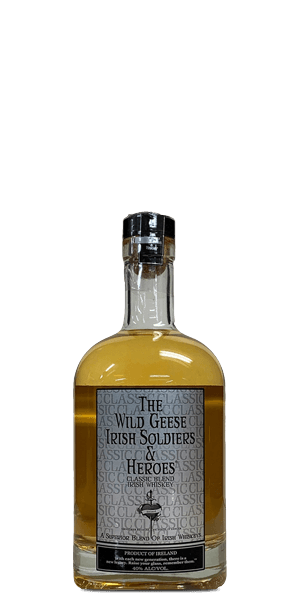 A Blended Irish Whiskey and a homage to all the brave immigrants the world over.

It was at the turn of the 17th century that the defeated Jacobite army of Patrick Sarsfield was given two options: live under English rule or flee to France. Little did they know that choosing the latter would result in them never being able to return to Ireland. These exiles were famously called The Wild Geese, a term that would later denote any Irish soldiers that left to serve in continental Europe. What better way to pay tribute to brave migrants than with a tasty Irish Whiskey?

The Wild Geese Irish Soldiers & Heroes Classic Blend is a mouthful whichever way you put it. There's the extended double distillation for that extra smoothness & character, but the secret to success lies in the blending of spicy malt and light & smooth grain. Then the juice is matured in once-used ex-Bourbon barrels. These guys are firm believers that it's not an age statement that makes a Whiskey great. Rather, it's the quality ingredients, blend, and casks. With plenty of awards to show for it ― including a recommendation in Paul Pacult's Spirit Journal ― who are we to object?

The Flavor Spiral™ shows the most common flavors that you'll taste in The Wild Geese Irish Soldiers & Heroes Classic Blend and gives you a chance to have a taste of it before actually tasting it.

Nose / Aroma / Smell
It's a light and inviting nose with berry and oak aromas. A touch of spice balances it out.

Flavor / Taste / Palate
Equally light, mild, and fruity on the palate, there's a grain note in there, as well as honey, citrus, and nutmeg. It's a well-balanced one.

Finish
Finishes clean and smooth with a touch of heat.