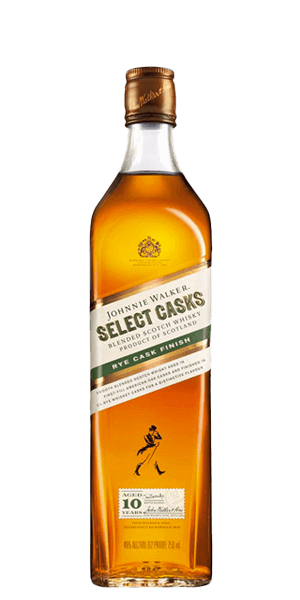 Today, Johnnie Walker’s famous square-shaped bottle—with the label set at a jaunty 24 degrees—is THE most popular blended Whisky in the world, selling more than 130 million bottles per year in nearly every country on the planet across their wide range of ages, special editions, and finishes.

It is fairly common to talk about “finished” Whisky in the single malt universe, but it is pretty rare in the world of blended Scotch. So when a major producer with the market power and dedicated following of Johnnie Walker does it, the entire population of spirit-loving blokes stands up to take notice.

Released to the world just a few months ago, the Johnnie Walker Select Cask Rye Finish is their classic Johnnie Walker signature blend aged a minimum of ten years before being finished in American oak Rye Whiskey casks. That and the fact that it’s bottled at a full 46% ABV means that the result is a more flavorful, richer dram with a Rye spice on the finish that makes it the best Johnnie Walker we’ve had this year.

The Flavor Spiral™ shows the most common flavors that you'll taste in Johnnie Walker Select Cask Rye Finish and gives you a chance to have a taste of it before actually tasting it.

Joe, Feb 12, 2020
This 10yr Select Cask is a great Scotch for the price. Not a very big peaty, mossy Scotch. More on the smoother side. Great on a sphere or block, or can be drank neat as well.

guest, Jan 5, 2016
Well, I think a free bottle should be shipped directly to me. When can I expect that package?

guest, Jan 1, 2016
Very pronounced flavor. Without a doubt this is a Rye style of whisky.
Load more reviews