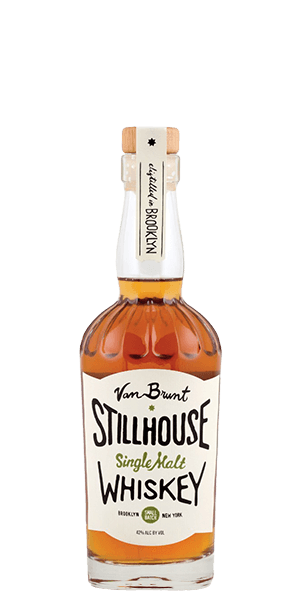 Way back, the banks of the Gowanus river were meadows and indifferent sheep. But then one day Cornelius Van Brunt came from the Netherlands and decided to build "Breukelen". Now it's called Brooklyn and it's a home to a young budding distillery that bears the old Cornie's name, and creates fresh quality Spirits. Meet Daric Schlesselman (an editor for the Daily Show) and his wife Sarah Ludington, who decided to make farmhouse style Whiskey in the heart of Kings County.

They source wheat, rye and corn directly from upstate New York, while their Malt is made from barley. Single Malts have become a thing in America and while most of them are made according to strict Scottish rules, Van Brunt's Whiskey puts a twist on the beloved tune. They age it in virgin oak casks for nine months to avoid any ghosts from previous Spirits and emphasize the oak itself.

This crafted bad boy is a real treat if you sip it on its own, and if you wish to get more coffee & chocolate notes from it, add a few drops of water. If you love cocktails, put it in those where Bourbon usually resides. (You know, the Old Fashioned.)

The Flavor Spiral™ shows the most common flavors that you'll taste in Van Brunt Stillhouse Single Malt Whiskey and gives you a chance to have a taste of it before actually tasting it.

Nose / Aroma / Smell
Fruit, caramel with notes of a nutmeg.

Flavor / Taste / Palate
Oak and coffee and chocolate and vanilla and ohhh so sweet.

Finish
Medium with a hint of tobacco and citrus.