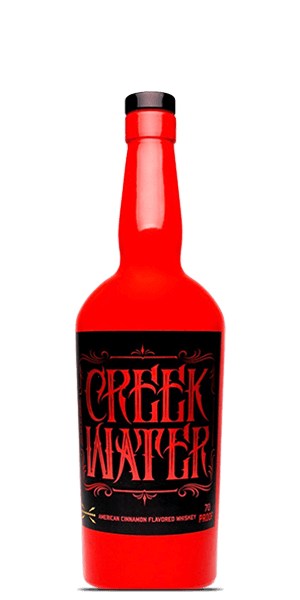 The brand comes from a partnership between Next Century Spirits and super-famous hip-hop star Michael Wayne Atha who goes by the stage name Yelawolf and is known for smash-hit tracks such as Till It's Gone and Best Friend. Creek Water channels the outlook of Yelawolf's Slumerican brand & record label ― it's a down-to-earth Whiskey that's equally at home in a working man's tumbler on the rocks, in a hipster's glencairn, or in the paws of a grizzled biker wielding a bottle of the stuff.

The brand currently has 2 Whiskeys in its lineup. The 100-proof flagship Bourbon has a mash bill of 75% corn, 21% rye, and 4% malt. The no-frills Spirit has quite a few awards under its belt, making it the perfect base for its flavored sibling. The Cinnamon Flavored Whiskey is cut down to 70 proof, taking a bit of the heat off. Then there's the added cinnamon flavoring for that extra spicy kick. Hey, this isn't just for hardcore Yelawolf fans!

The Flavor Spiral™ shows the most common flavors that you'll taste in Creek Water American Cinnamon Flavored Whiskey and gives you a chance to have a taste of it before actually tasting it.

Nose / Aroma / Smell
It's a pleasantly spicy nose with baking spice, vanilla, and a touch of maple syrup. The cinnamon stands out.

Flavor / Taste / Palate
The palate has your Bourbon notes of brown sugar, honey, and a touch of charred oak, with the cinnamon ever present, yet never overbearing.