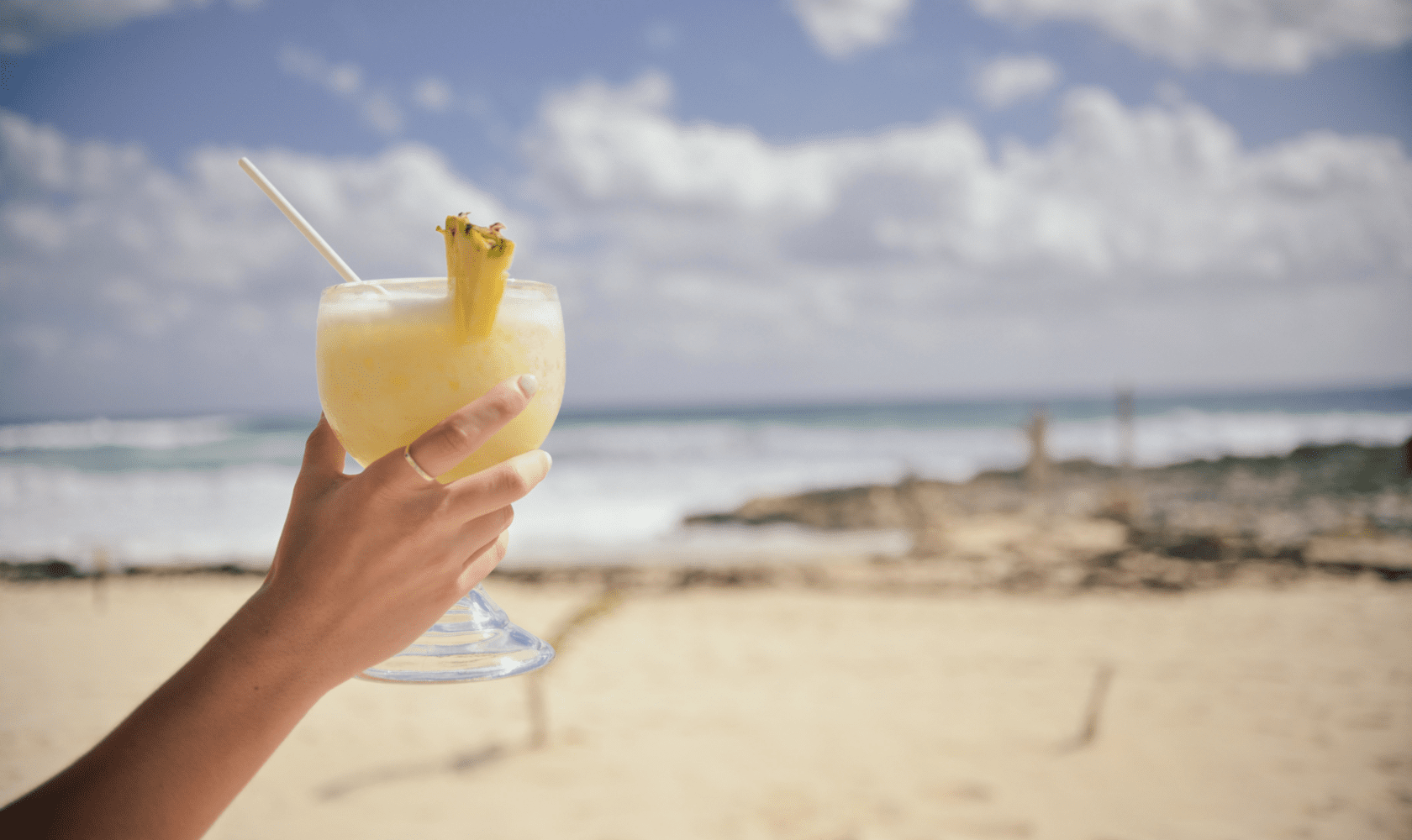 A recent trip to Grenada brought into sharp relief just how diverse the Rum category can be in terms of production. And – by the way – Grenada is a wonderful holiday destination, all the best parts of the Caribbean in a friendly, welcoming and beautiful location.

In a previous post, "A Guide to Every Rum Type You'll Ever Encounter," I’ve mentioned that Rum category is exceptionally diverse and quite inclusive – perhaps detrimentally so and that’s a topic for another time – but it’s true to say there’s a Rum for everyone, and its certainly true in Grenada!

My trip started with a visit to Grenada Distillers Limited, whom are located in the south of the island, not too far from the capital city of St. George's. It’s also the site of a long-closed sugar factory there which dated back to the 1800’s, but like so many sugar producers, the economics of producing sugar forced closure.

The distillery as we see it was constructed in the 1970’s and features a John Dore two column, continuous distillation still. The company buys molasses on the open market – predominantly from Guyana and ferments it in about thirty-six hours using a proprietary yeast strain.

It’s a simple process – the yeast consumes the sugar in the watered-down molasses, producing alcohol, carbon dioxide and other congeners etc. that we can think of as ‘favour components’.
When the sugar is gone, fermentation stops, and we’re left with a wine that has an alcohol content of about 6%, and as long as this fermented wine can be continually pumped into the still, the process of separating the volatile components from the non-volatile components – i.e. distillation – can happen continuously as well.

What distillation means in practice is separating as much of the desirable alcohol from the water, residual solid matter and undesirable alcohols produced during fermentation. A function of this type of fractional distillation is that the alcohol collected tends to be quite clean (tending towards, but not quite neutral), as well as being high proof - approximately 96% alcohol.

This level of efficiency allows Grenada Distillers to produce around 2,200 litres of high proof booze every 24 hours, allowing them the ability to satisfy the demands of the home market in terms of price and proof (search out bottles of Pure White when you are there).

A post shared by Grenada Distillers Ltd. (@grenadadistillers) on

The average Grenadian seems to want their booze around the 69%ABV mark and isn’t too fussed about waiting for it to be matured in oak barrels. As efficient as this set-up sounds, there are facilities elsewhere in the Caribbean that can exceed this level of production.

They do lay Rum down to mature though and have a range of aged Rums which are gaining an ever-increasing popularity. As you’d expect, automated bottle filling lines allow the distillery to keep up with demand.

The know on effect of this is that it's less efficient for Grenada Distillers to produce, but a little more characterful in terms of flavour. We’re not talking wide margins here, simply sufficient to be noticeable and be my preference. Worth tasting both side by side.

On the Other Hand – A Step Back in Time

Moving to the north of the beautiful island of Grenada, our second stop saw us visit River Antoine, and the set-up couldn’t have been any different. River Antoine has been producing its Rum since 1785 from the locally grown sugarcane, rather than from imported molasses (although I’m told they do use molasses to supplement their supply of cane juice when conditions absolutely demand it). 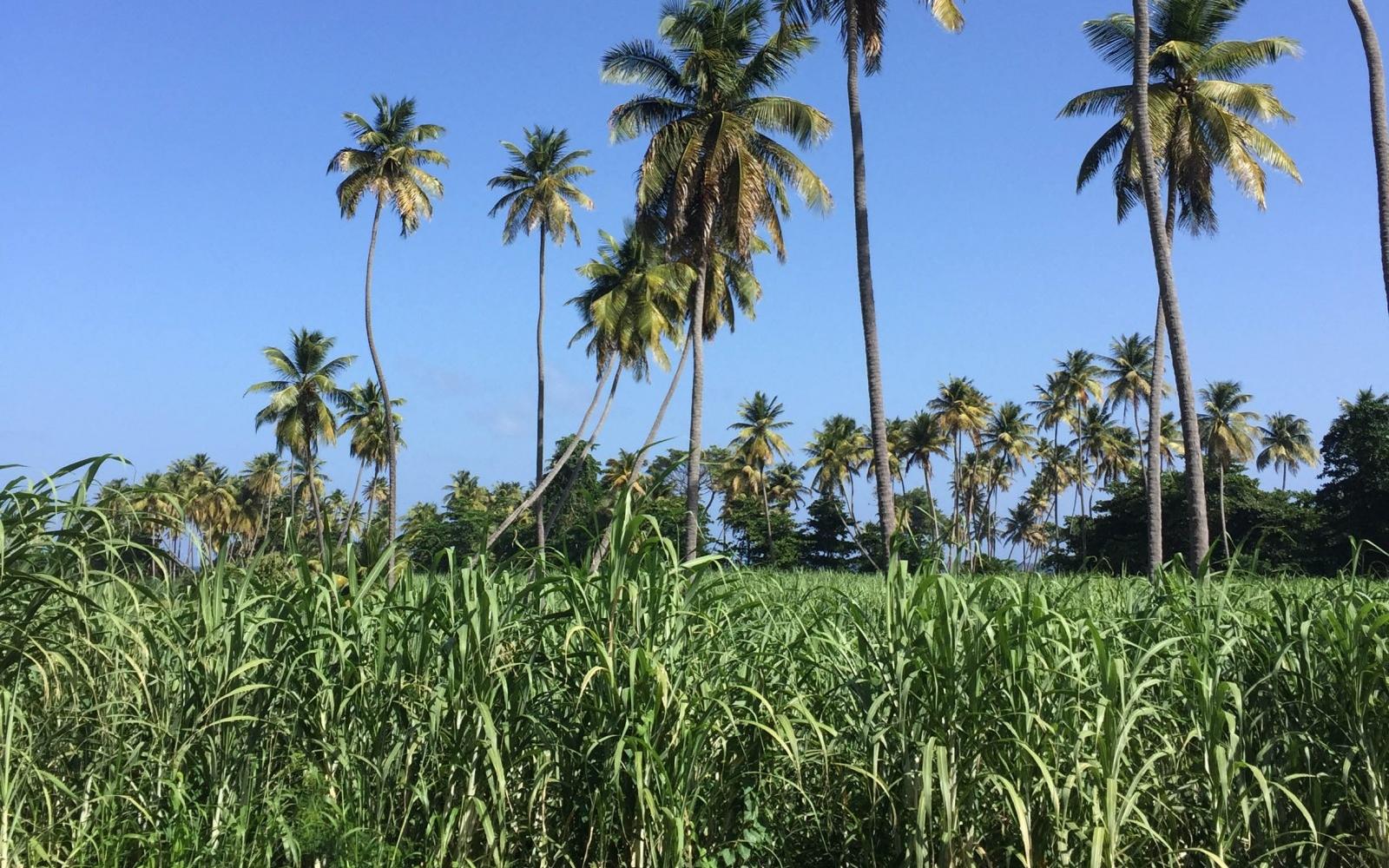 Normal production starts with bundles of fresh cut cane being brought into the facility and being crushed using a waterwheel first installed by the British when the island came under their rule. The facility was there when the French were in control, but cane crushing – or at least the labour of driving the crushing equipment – was the job of oxen.

The waterwheel requires a head of water, but when the sluices are shut to build the head up, the flow of water downstream to the villages is cut off, and because the river must be shared, this means that crushing only happens twice a day for a few hours at a time. 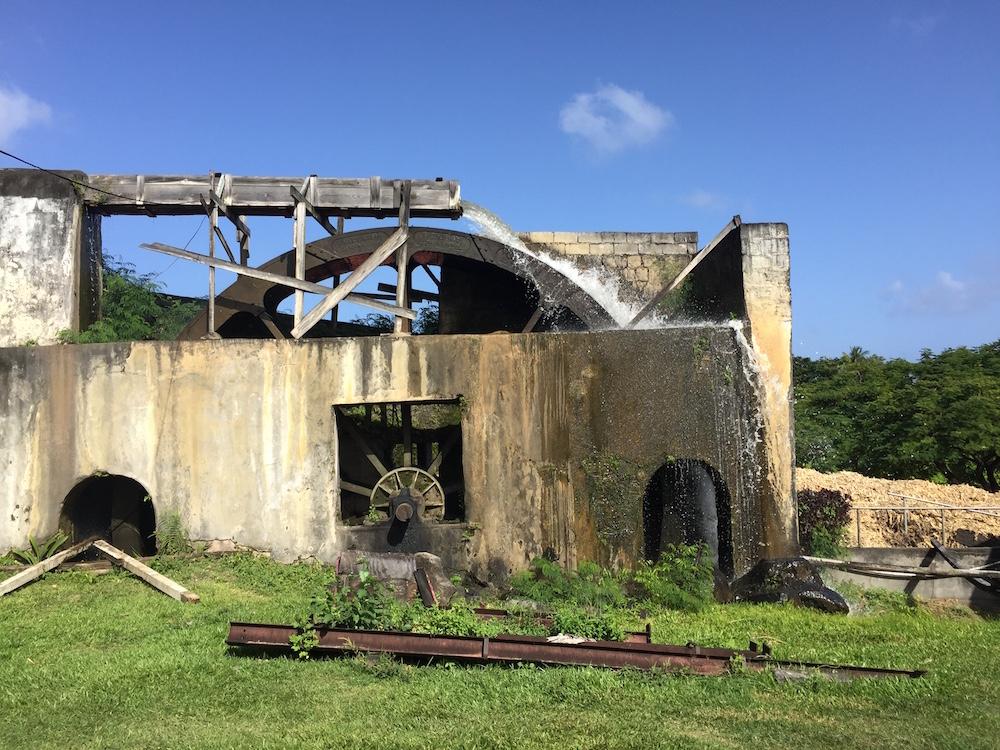 The crushed cane juice is collected via series of channels and fed into a serious of pans that are heated from underneath, in order to reduce the water content of the juice, but not actually boil it and this is achieved by a ladling the juice from one pan to the next, in a particular manner that helps agitate and circulate the contents of that pan as well.

Sounds complicated, but the goal is to end up with a syrup, that’s not been boiled as that imparts a caramel note that that impacts on the flavour of the Rum. 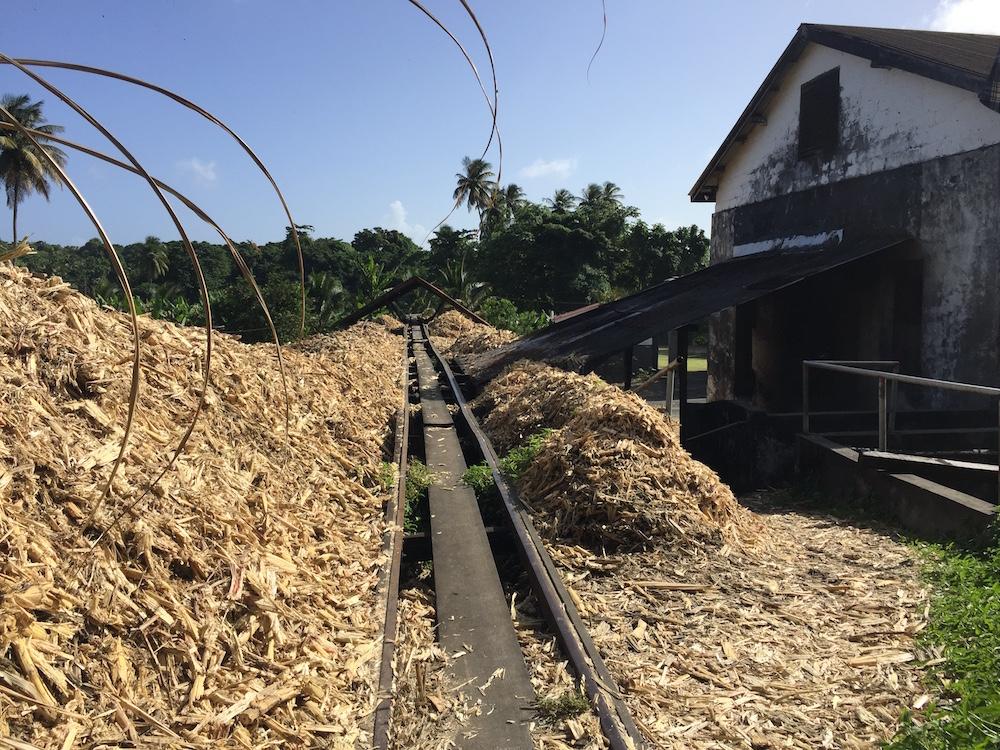 Once reduced and an appropriate amount generated, the syrup is moved off to one of nine, open topped fermentation tanks. The process of fermentation takes eight days and requires wild airborne yeast to colonise and create the wine which ends up around 14%.

The open tanks are completely open to the elements and rumours of bats droppings and all manner of other flora and forna interacting with the process are entirely plausible, and indeed highly likely. The result is a brew that is packed with all manner of congeners and ripe for distillation. 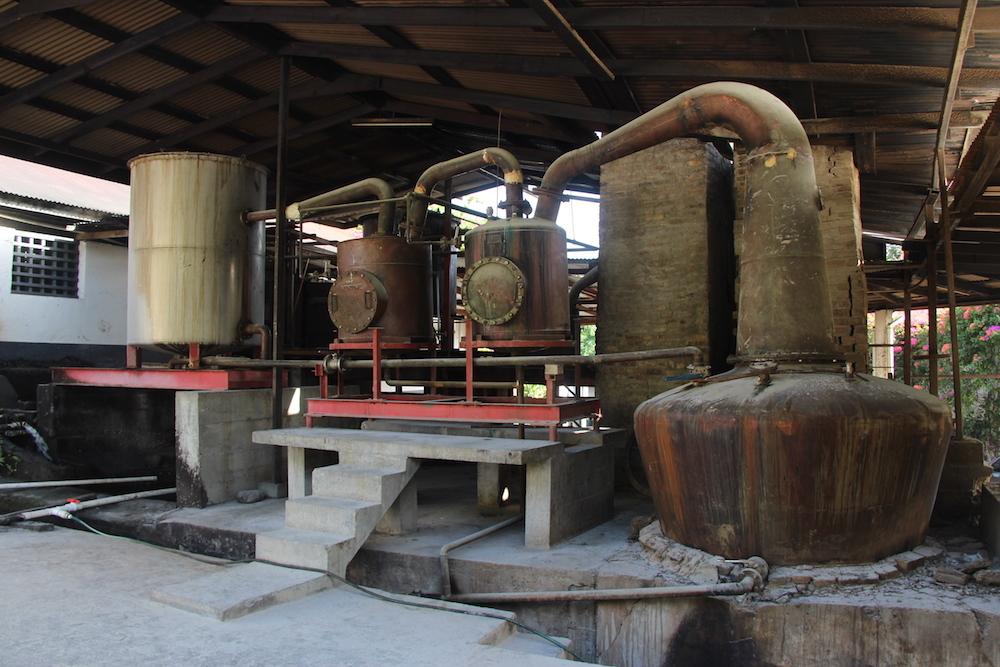 Distillation in this case is via a wonderful, traditional Caribbean Vendome double retort pot still, heated (somewhat amazingly) by a wood fire – the control of which is purely down to the skill of the operator. I’m told the still is normally run on a single pass (which seemed unlikely), but sometime a double pass (depending on the quality of the spirit produced I guess).

Again, I’m told its distilled to strength, i.e. 75%ABV and stored ready for bottling without further adjustment if it’s the Rivers Royale, or with a small amount of water added if it’s the Rivers 69% - the ‘safe’ strength for air travel.

Bottles are filled by hand, utilising that most mundane of pieces of equipment – a Rubbermaid water cooler – to control the flow! All very basic, no less practical, but it certainly operates on a different timeframe to Grenada Distillers. 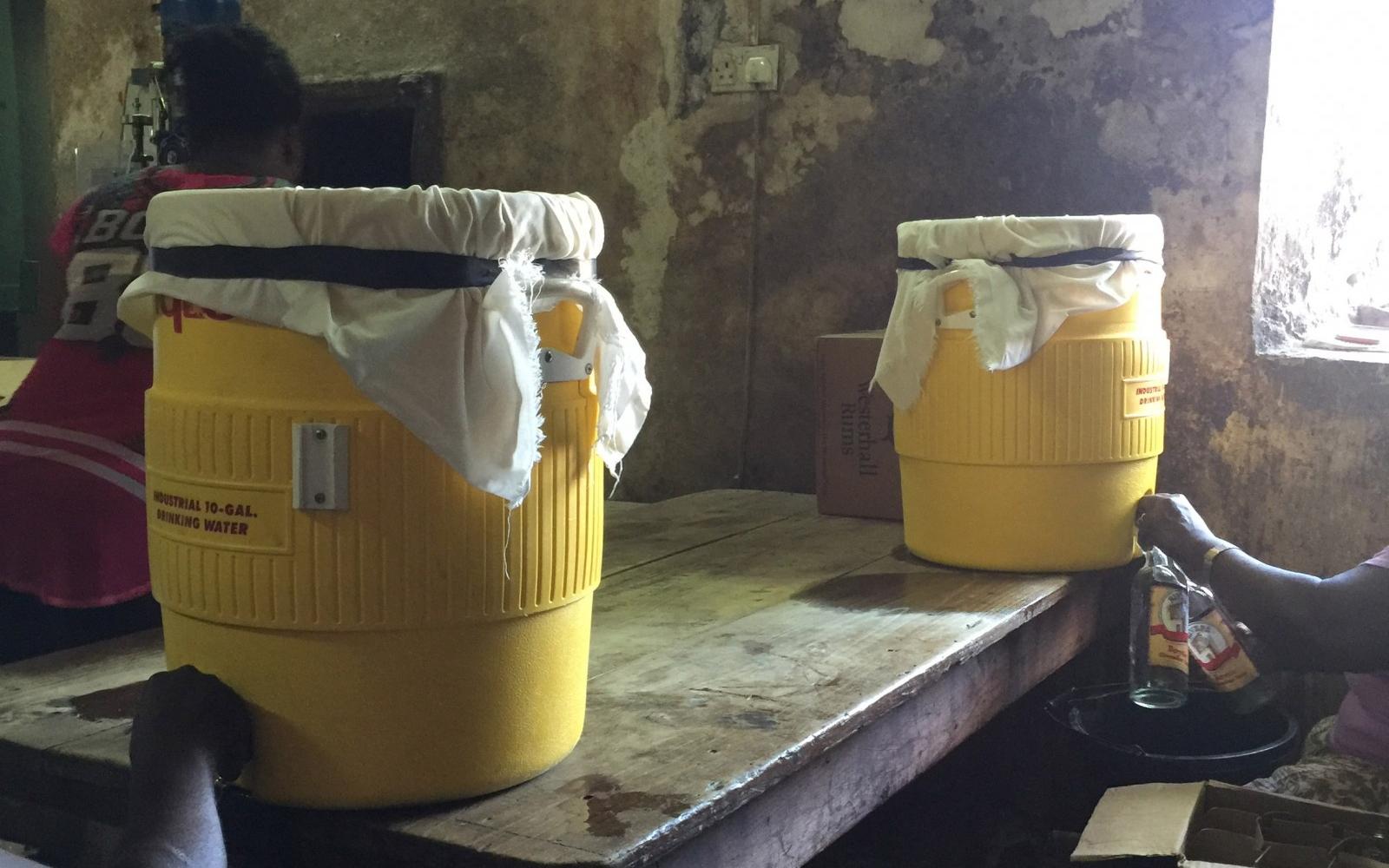 Where Grenada Distillers are organised, repeatable and efficient, River Antoine seems to be the opposite. Lots of people employed, lots of variation in the production process, a ridiculously robust and almost overly characterful Rum. River Antoine struggles to keep up with production, certainly isn’t laying any down for ageing and seems like it’s a place caught in time.

At the time of visiting, there was a brand new, freshly delivered pot still awaiting installation, so it’s not entirely stuck in the past. But it’s caught in predicament that it can’t produce any more without more crushing capacity and they have no desire to swap to a different solution.

It’s perhaps one of the most authentic, time honoured Rum producers in the Caribbean, and yet it produces a Rum so robust that the majority of modern drinkers wouldn’t like the flavour. It is entirely an enigma.

The Rum being produced from cane juice means it tastes very different to the more commonplace molasses distillates, and when I say different – I mean seriously – this is very, very different. Vibrant, grassy, fruity perhaps and overpowering. Contrasting against the clean, nearly neutral Rum from Grenada Distillers. Truly poles apart and yet opposites attract, at least when it comes to Rum!