Behind the Scenes: The Making of Frérot XO Cognac

In this blog post I’ll try to take you behind the scenes and uncover how Frérot XO, the first very own cognac from Flaviar, came to be. I’ll explain the thought process behind it, some decisions we’ve made, what we stand for, and highlight some events that I hope might be of interest -> the journey, crowdtasting process, Frérot Cognac transparency and its Flavor Spiral, plus some other Cognac related topics.

When you hear “Cognac,” what’s the first thing that comes to mind? If it’s the weekend stopover to a towering mansion somewhere on the French Riviera amongst a crowd of the global elite, well … let’s just say you’re not alone. And because of that elitist reputation (but not just because of that!), people usually get somewhat intimidated by it, wondering if it’s all worth it.

Here’s the fact: Cognac is an underappreciated spirit. And that’s just a damn shame!

That’s why (and because we love Cognac, of course), we decided to go on a quest to change that. With ‘Flavor to the People’ being Flaviar’s mission from the start, we could hardly think of a better challenge. Obviously, we’ve put a lot of effort into education, but we’ve taken it one step further. A major part in the creative process played the people—our members, who became the Frérot co-creators. But let’s first start... where it all started…

The journey began in 2016, when a small Flaviar expedition, myself included, took off on a road trip to the southwest of France—the Cognac region, to be exact. Our mission was simple and a not-so-unpleasant one: meet with a list of Cognac producers on their home turf, discuss juice, taste their drops and identify several contenders for Flaviar’s first Cognac.

Fun fact: Cognac is an actual place. And yes, there’s a helluva lot of Cognac there. 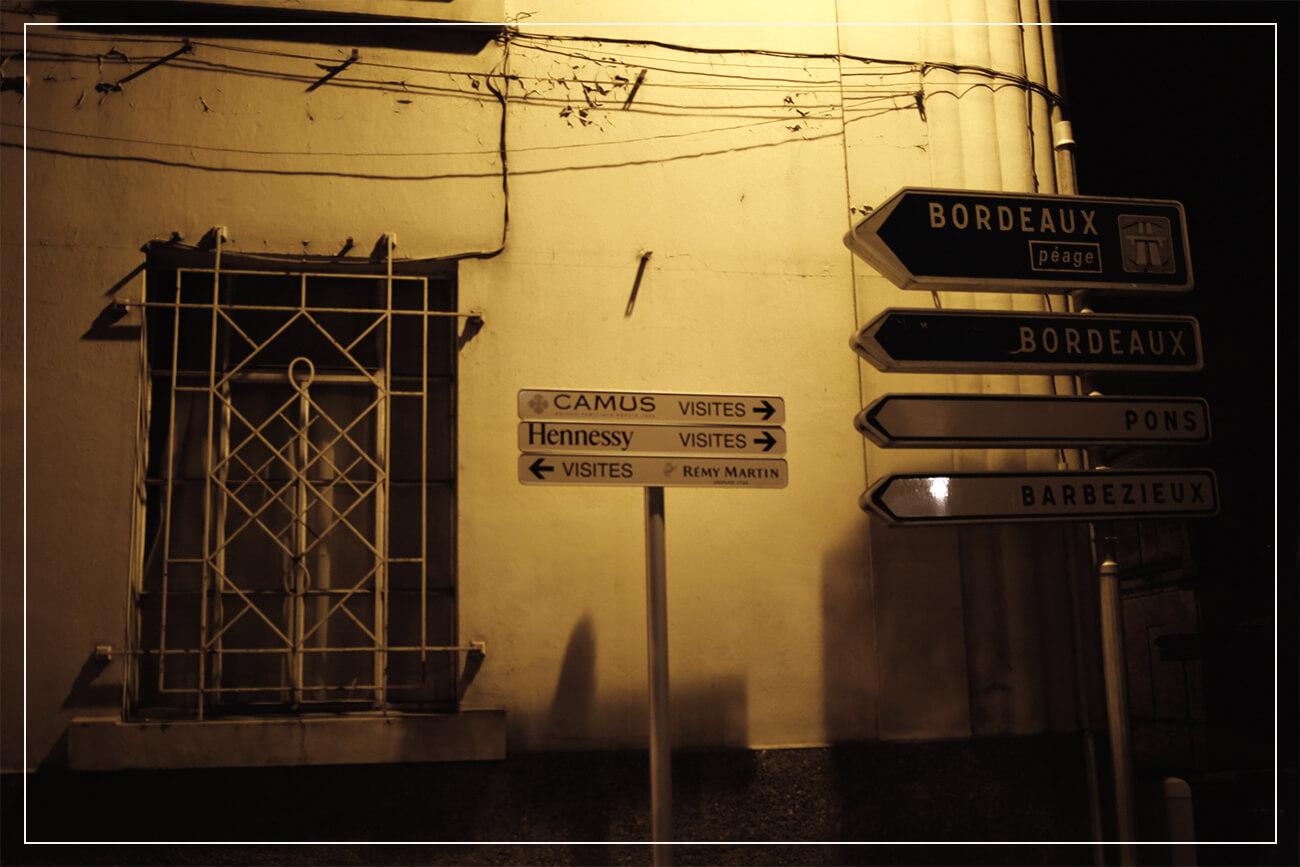 Along the way, we enjoyed some of the finest scenery and delicacies the French countryside has to offer. Purely for research purposes, of course.

Together with the Cognac masters of the Universe, we worked our way through an extensive range of Cognacs aging in their cellars. No, no—not all in one sitting. The matter took a few decadently delicious days.

After the epic trip was over, we knew we were still far from done. We’ve been exchanging, tasting and debating various samples of Cognac blends for almost 2 years. Our goal was to find three fairly different high-quality XO blends showcasing a wide range of flavors Cognac has to offer that would be tasted and judged by the people - the members of our community.

Finally, in the beginning of this year, everything and everyone was ready to bring in the most important crowd; the Members. It was time to conduct our first-ever crowd tasting!

This was the most important part of the process; putting three exemplary XO Cognacs with their variety of characteristics in front of our Members and asking them what they think. We really wanted to make sure Flaviar Members’ voices got heard and were reflected in the final expression of Frérot. Responsible, but fulfilling task we gladly took on. 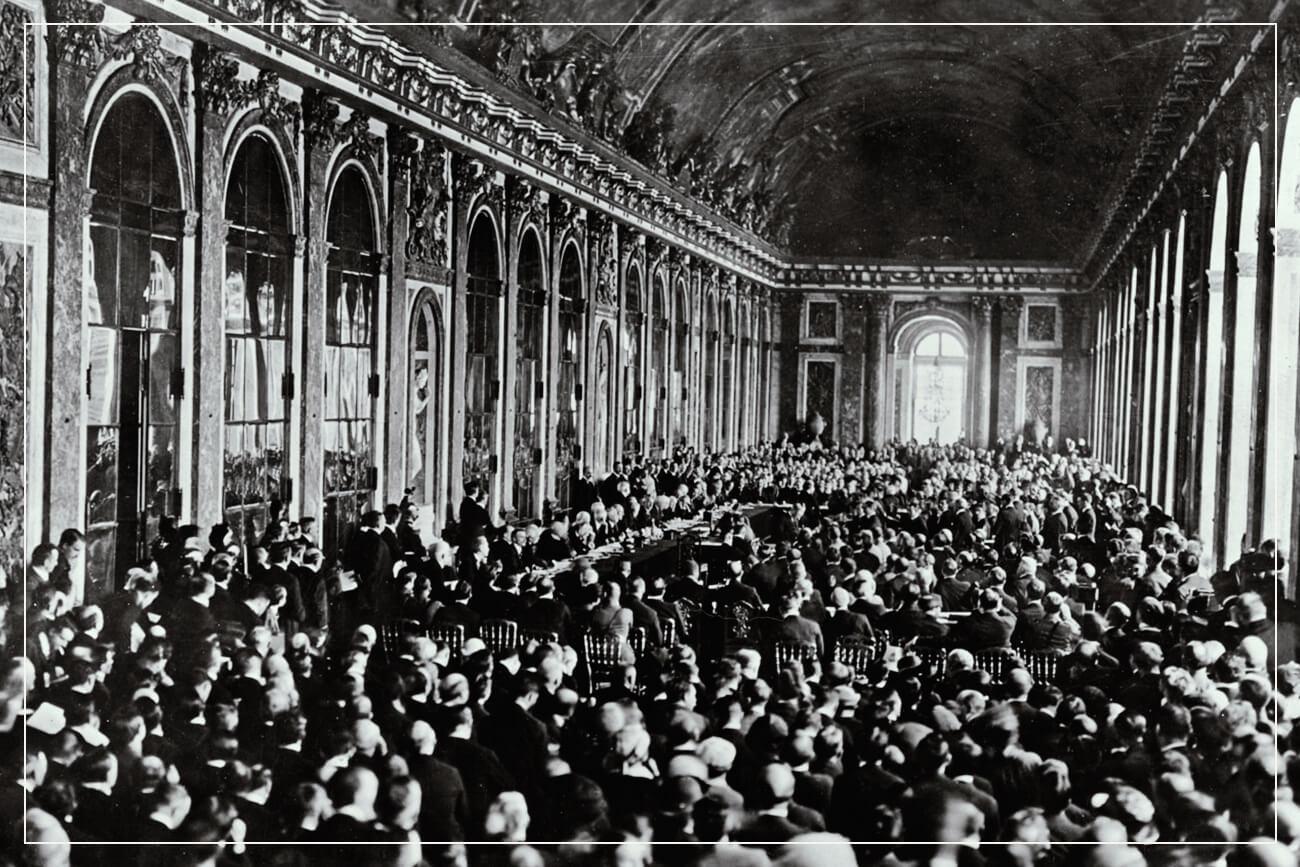 A total of 800 Tasting Boxes were sent to our Members, along with a few spirits writers and bloggers. Each Tasting Box included three XO Cognacs—but very little information on them, so as not to influence the tasters in any way.

There was also an accompanying questionnaire to fill out. While the questionnaire asked our Members for their favorite expression, we also wanted to get some more complex/qualitative feedback on the flavor profiles and their preferences, the level of sweetness, and alcohol level they preferred the most. Data? Lots of data. Yes!

Combing through the votes and reviews gave us a very clear idea of the sort of Cognac our members would appreciate, so we were pretty confident and ready to bring Frérot to life. Magnifique!

Frérot XO is an ‘Assemblage de Crus’, a blend where the Eaux-de-vie from all 6 Crus come together to create a beautifully multi-layered Cognac. I guess we could even count the fact that every Cru is represented, as yet another example of the Cognac democratization. Wow, people opted-in for the ‘all Crus’ Cognac and not just simply going for the Grande Champagne Cru? (Is it because they didn’t know which one is which? Perhaps.)

Shameless plug: Frérot is a rather rare example of small production XO Cognac—a blend of Eaux-de-vie that’ve been aged for a minimum of 20 and up to 35 years in French oak barrels. Produced using centuries-old tradition, but with one important twist: the input of Flaviar Members as co-creators. 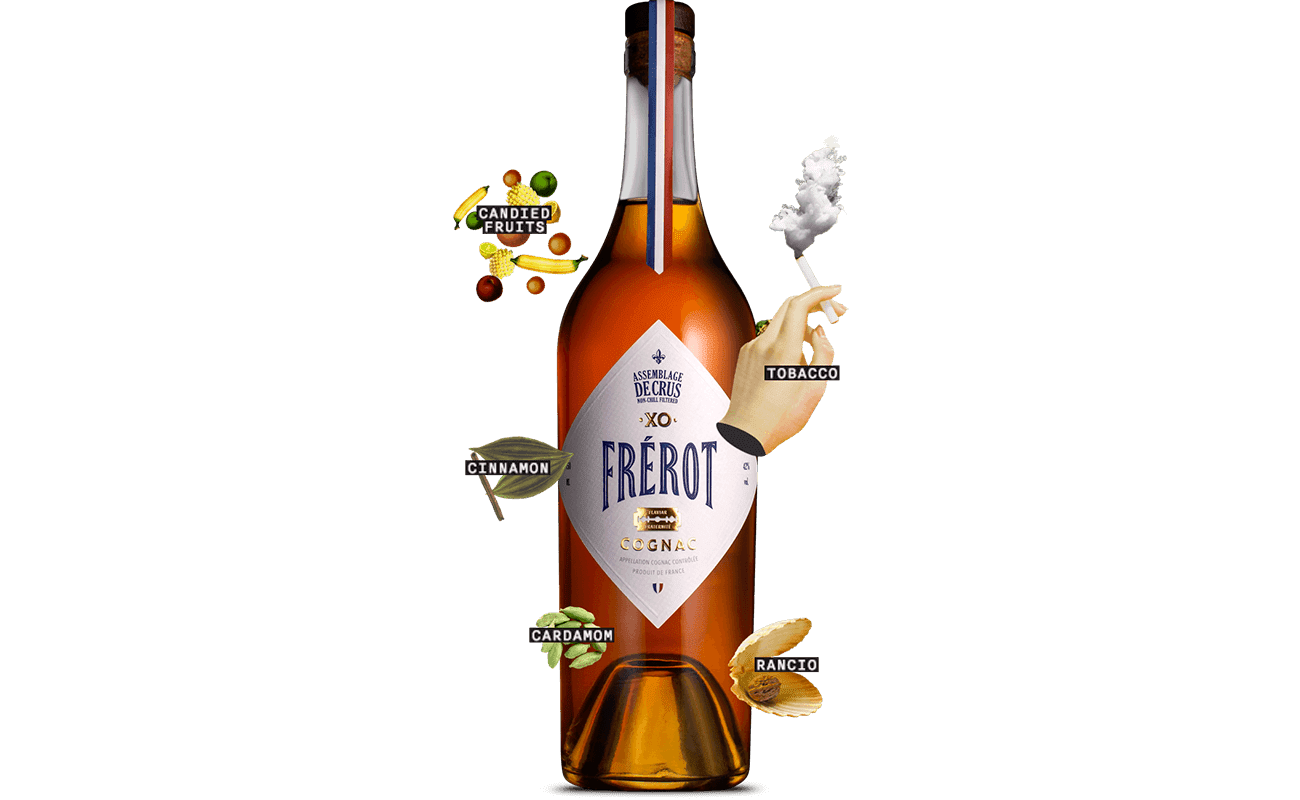 Because it’s non-chill filtered and bottled at a slightly-higher-than-usual ABV (42%) and because the majority of co-creators are Whisk(e)y enthusiasts we could also think of it as a Cognac made for Whiskey lovers.

This is geek’s section. But I need to share it with you, because we’re quite excited by the whole Frérot transparency initiative.

While the production of Cognac is incredibly regulated, there are some processes and ingredients that producers can add to their Cognacs without having to disclose it. For example: using an accelerated aging method called boisé, adding caramel or sugar is something producers usually don’t talk about, because they don’t need to. But we set out to create the people’s Cognac, right? So we wanted to be open about how it was produced, event if it meant going contrary to the norm. 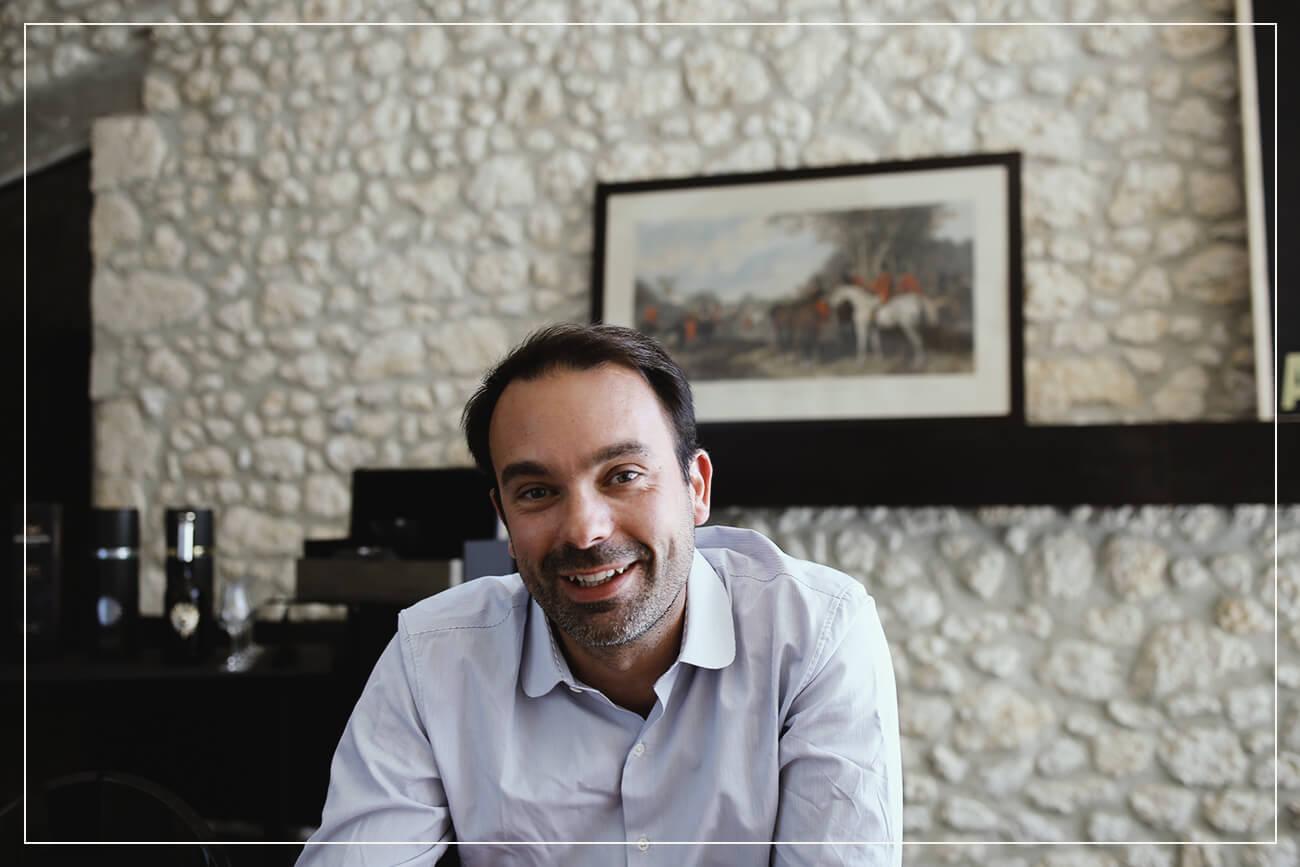 Here’s the truth, the whole truth and nothing but the truth: Boisé was not used in the production of Frérot. Caramel wasn’t added, either. Frérot was also non-chill filtered. We took the risk and filtered it at room temperature to ensure its full potential of irresistible, expressive aromas.

Non-chill filtered: ABV of Frérot is pretty low for the non-chill filtered exercise, so floaty little clouds might appear in a bottle. But don’t panic, there’s nothing to worry about, it’s just long-chain fatty acids having some fun and it’s all natural.

There is a tiny bit of sugar added to Frérot, though much less than what you’d typically find in comparable widely available Cognacs. This was mostly because the co-creators expressed a preference for a slight sweetness in the flavor profile.

Why we called it Frérot?

Well, obviously, because it’s French, but the most important is the meaning behind it. In French, the word frérot is used when addressing your friends in an affectionate street-style way, and so we thought it was a perfect name for an approachable, slightly less pretentious Cognac we co-created with our friends. 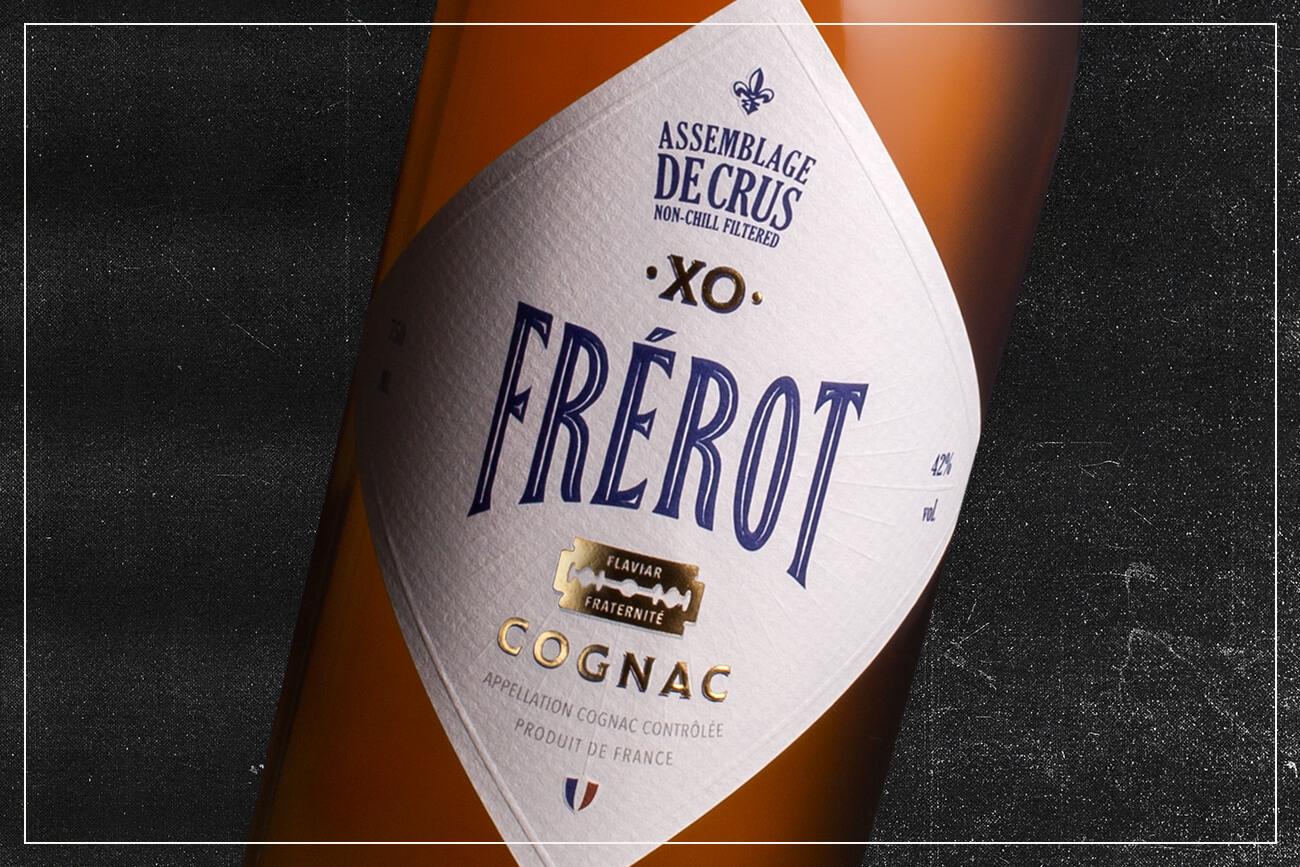 What’s with that golden razor blade on the label you might ask. Well, this is the only thing we’re not telling. You know … if you know, you know.

Frérot is up for grabs!

In keeping with our Flavor to the People mission, we wanted to offer highest quality Cognac with an approachable price. Although being an XO Cognac, Frérot doesn’t come in a fancy bottle or a decanter - we decided not to splurge on the packaging, but rather on the juice that goes in, which means we all win!

Speaking of approachable prices – indeed, you do not have to spend a fortune for a good bottle! Browse our selection of best Cognacs under $100!

There are 2,000 bottles currently available in the first batch of Frérot. Both existing and new Flaviar Members get first dibs and at a members-only price.

Read more about:
Published May 6th 2018
By Grisa Soba