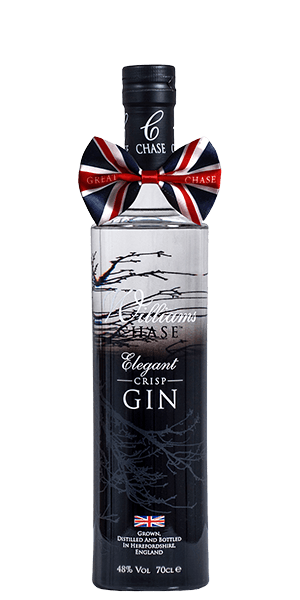 Gin William Chase is a potato farmer based in Hereford, UK. After selling his spuds wholesale for 20 years, Will felt detached from consumers, and decided to create a product he could sell directly. In 2002, Tyrrell’s Crisps (or chips, for you USA-dwellers) was born. But while the chips were anything but down (you’ll find ‘em in most UK supermarkets), Will wanted more, and decided to make a potato Vodka, then an apple Vodka, using produce grown on his farm.

Jump forward a few years to 2008 and meet Williams Chase Elegant Gin. Its base spirit is made from scratch using apples from the farm’s orchards, (also the base for Naked Chase Vodka) which creates a crisp, citric flavor. Added to the base spirit in Chase’s still (affectionately called ‘Ginny’) is hops, elderflower, juniper, Bramley apple and angelica, plus secret wild botanicals from the farm’s meadow.

Provenance is of great importance to Chase; in fact, they created Britain’s first single-estate Gin (Chase GB Extra Dry Gin, if you’re interested). Their ‘field to bottle’ method ensures that every ingredient in every bottle of their Gin comes from the farm, is picked, ploughed, harvested, cut, distilled and bottled on site.

The Flavor Spiral™ shows the most common flavors that you'll taste in Williams Chase Elegant Crisp Gin and gives you a chance to have a taste of it before actually tasting it.

Michael, Apr 29, 2018
Nice citrus flavor. The citrus zest stands out. One of my favorites.