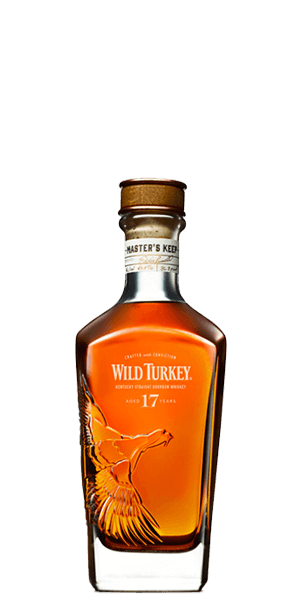 An accidental game of lost-and-found that ends rather well.

Wild Turkey Bourbon Master's Keep 17 Year is the oldest Bourbon they’ve ever released… and it happened by accident. Seems they ran out of storage space in the wooden rick-houses at the Wild Turkey Distillery, so a bunch of barrels were moved from the lowland stone warehouse at Old Crow. When space opened up, they moved them back into a metal and wood one. All that movement and the time spent in stone meant more wood contact with less water and alcohol evaporation (angel’s share). When inventory was taken, they found a bunch of seventeen-year-old casks that tasted like their best Bourbon… but better.

The Flavor Spiral™ shows the most common flavors that you'll taste in Wild Turkey Master's Keep 17 Year Old Straight Bourbon and gives you a chance to have a taste of it before actually tasting it.

Tom, Jun 27, 2020
I have the 17yr BiB. This is the best whiskey I have ever had. It blows me away. you can nose the glass for ever and the pallet is beautiful rich sweet flavors with an oak finish that is sweet and luscious. Thank you Wild Turkey for this expression!

Robert, Mar 20, 2020
One of my favorite daily's, right flavour just everything was worth the price

David, Sep 3, 2018
So good and smooth. Learned about it at a tasting and have already been through a couple of bottles.

Andrew, Mar 1, 2018
Let me start by saying in general I love Wild Turkey whiskies—101 is one of my staples and the Russell's Reserve is a can't miss. This one was a huge disappointment. Nice enough nose and starts out with decent flavor but it quickly devolves into an astringent, medicinal finish that is borderline sour. I don't know if I got a bad bottle or what but for my money this is one WT expression I'll avoid next time.

Michael, Jan 31, 2018
Not my favorite expression from wild turkey. To me, it tastes a bit burnt. I much prefer the younger flavor profile of a Russell's Reserve barrel select, or Booker's. All the same jot a bad dram and it will be fun to share with friends.

Lorenzo, Sep 7, 2017
This is very well aged bourbon, lots of oak with the Wild Turkey subtle hint of sweetness. Good dram to have neat or with a little water.

Clinton, Jul 17, 2017
Very smooth and easy to drink just like you would expect from 86 proof. Don't let that scare you away because aroma/appearance/taste all make this worth the money.
Load more reviews