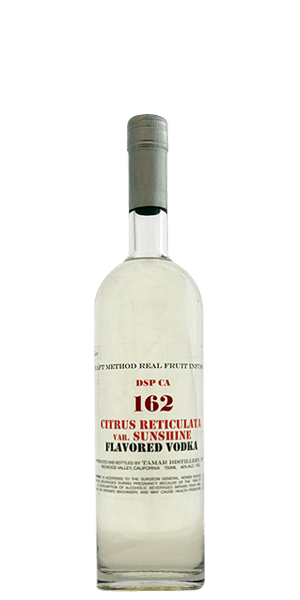 You enjoy it with your nose long before the first sip.

Ansley Coale is a man with history. He co-founded the legendary Germain-Robin Craft Distillers in 1982. Then, in 2001 he partnered with St. George Spirits to create a new Vodka Brand — Hangar One — which was a HUGE hit. In 2010 they sold that brand to Proximo Spirits and the partners had to sign an air-tight non-compete agreement. That contract expired in 2013, and within months Ansley started working on Vodka once again — this time with Crispin Cain of Tamar Distillery. They released their first bottles in 2014 and now have six varieties.

There is a super-exotic member of the citrus family called a “Buddha’s Palm.” It’s native to Southeast Asia and it looks like creepy chili-pepper fingers twisted into knots. But if you can get by the odd appearance, you will discover that it might be the most aromatic citrus fruit ever. In fact, locals hang them inside as a room freshener. DSP CA 162 Vodka Citron is eau-de-vie distilled from Muscat, Riesling, and Viognier grapes that is infused with Buddha’s Hand fruit — just like you would if you are infusing botanicals to make Gin. And all that attention to detail makes a difference you will taste.

The Flavor Spiral™ shows the most common flavors that you'll taste in VODKA DSP CA 162 Citron Vodka and gives you a chance to have a taste of it before actually tasting it.

Becky, Jun 9, 2020
I am all about lemon, to me, you almost cannot have enough lemon; however, this bottle is too lemony. I was sad. Otherwise it was super smooth and a good choice.