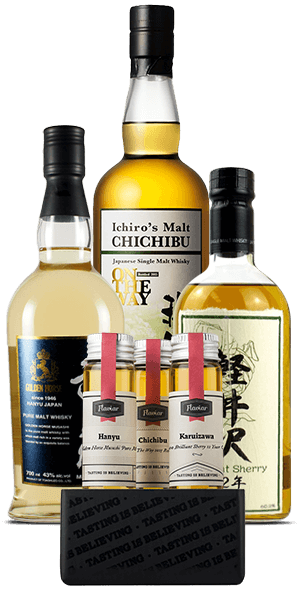 Chichibu On The Way 2015 Release: First aged in Bourbon casks and finished in Mizunara Japanese oak casks, this outstanding Japanese Whisky is made by mastermind Ichiro Akito. He founded the famous Chichibu distillery in 2008 which quickly became notorious for its masterful juice.

Karuizawa 12YO Brilliant Sherry 2000: Not content with just any slice of land, these guys built their stills in 1955 underneath Mount Asama—an active volcano. They only used Golden Promise, an imported barley from Scotland that was praised for its stellar character when matured for longer periods of time. The distillery closed its doors in 2000 and its old stocks are coming out in special releases. And yes—they get snatched up pretty damn quickly. A 12 year old expression finished in sweet Sherry casks.

The Flavor Spiral™ shows the most common flavors that you'll taste in Vault Selection XXVII. Japanese Malts and gives you a chance to have a taste of it before actually tasting it.

Antti, Sep 29, 2017
An interesting, sampling of a few expressions from Japan.