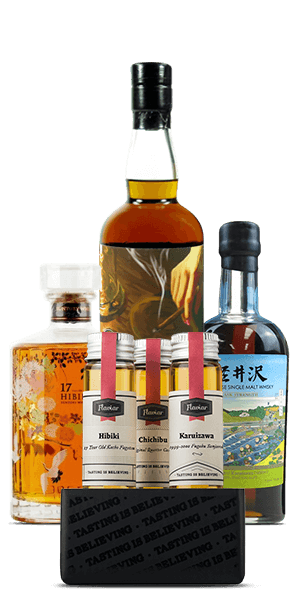 Hibiki 17 Year Old Kacho Fugetsu
A perfection of blend, this is a limited series from the Hibiki distillery. All those awards aren't for nothing.

Chichibu 2009 Original Quarter Cask No.388
Aged in smaller quarter casks that produce an extra depth of flavor for this rather young Japanese Whisky brand.


Karuizawa Cask Strength 1999-2000 Fugaku Sanjurokkei 5th Release
What is there to say about this mystical distillery? Its stills began burning back in 1955 under a real deal volcano—yep, Mount Asama. They used imported barley from Scotland known as the Golden Promise—a grain that's praised for its great characteristics when matured for a longer period. The distillery closed its doors in 2000, but its old stocks are coming out in special releases that get snatched up instantly. A cask strength, mighty Japanese Whisky.

The Flavor Spiral™ shows the most common flavors that you'll taste in Vault Selection XIX. The might of Japan and gives you a chance to have a taste of it before actually tasting it.