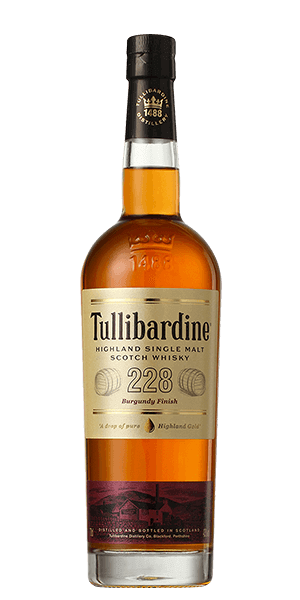 If we set out to find the oldest brewing and distilling spot in Scotland, Tullibardine would definitely be in the running. Back in the 15th century, King James IV—a young, strapping lad—made a stop at the local brewery here on the way to his coronation. Heck, wouldn't you? This is recorded as the first "official" purchase of beer in kingdom (though we think it fair to say that there were quite a few "unofficial" purchases being made at the time). The name Tullibardine means "vantage point" in Gaelic and originates from a little medieval chapel, set up in 1446 near the distillery.

The old brewery was transformed into a distillery back in about 1946 and has become a solid maker of single-malt Whiskey. They produce their signature Whisky, several finished "double-wood" Whiskies, and some older limited editions.

Tullibardine has a very interesting naming system for their finished wood Scotch Whiskies. They call their standard single-malt “Sovereign” a marriage of young and older Whiskies. The finished wood products are aged one more year in various barrels types and named for the size of the finishing barrel. Tullibardine 228 Burgundy Finish is so-called because the Burgundy wine barrels are traditionally 228 liters in size. Makes a little sense, right?

Smartass corner:
The name Tullibardine means "vantage point" in Gaelic and originates from a little medieval chapel, set up in 1446 near the distillery.

The Flavor Spiral™ shows the most common flavors that you'll taste in Tullibardine 228 Burgundy Cask Finish and gives you a chance to have a taste of it before actually tasting it.

Alex, Aug 5, 2020
Very impressed. Right of the bat I could smell the wine influence, and on the tongue it was no different. However, it still had distinct whiskey everything, no gimmicks here.

Jelena, Feb 17, 2020
At first it was strange, the wine smell, but when you let it stay in a glass fir sime time all that is left is a truly great single malt! I loved it!

Michael, Jan 27, 2020
Very overpowering taste,as other reviews say, its abit harsh, not to my taste but if you like an after taste that drop kicks you in the taste buds then this is the one for you.

James, Jan 22, 2020
Long last on the taste, easy drinking and lovely flavour coming through from the barrel. Great whisky.

Susanna, May 28, 2019
This was a bit different whisky, but I liked it a lot and I would recommend this. The Islay whiskies are my favourites and remain so after this new acquintance. It was well worth trying.

Antti, Apr 15, 2019
It is an outstanding, balanced, Single Malt Scotch Whisky by the with a creamy & balanced birth; while a rich & balanced life leads to a bold death of medium length with more spice.

Holly, Dec 4, 2018
Spicy and smooth finish. Decent but not running out to buy it.

Jeffry, Dec 3, 2018
Solid whiskey but not mind blowing. Liked my taster but wouldn’t run out and buy it. If you love Spicy whisky you may like this more

Dan, Dec 3, 2018
Reasonably smooth, not much body though. Vanilla notes on the nose. Overall okay, but not super memorable.

Terri, Dec 2, 2018
very smooth, hint of spice. extremely balanced. would love to be able to purchase this!

John, Dec 2, 2018
Really nice. The notes of vanilla are persistent and enjoyable.

Aaron, Dec 2, 2018
A youthful sweet scotch, with light cinnamon spice and bit of bitter from the new oak and heavier grape and berry character from the finishing.

Gordon, Dec 1, 2018
Great first impression for smell and taste. Takes a strange turn towards the end that I didn’t love, but kept me warm and happy

Alex, Dec 1, 2018
Very smooth and light. A bit of spice when it first hits the tongue with a slightly sweet, woody aftertaste.