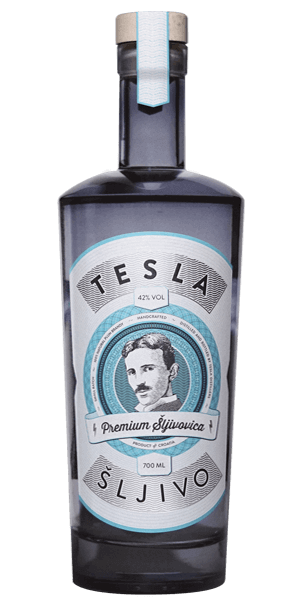 Tesla's ambrosia.
This Croatian plum brandy (sljivovica) was created in honour of the great inventor Nikola Tesla. It was developed over a year and a half with bartender and bar owner Branimir Hrkac (Bristol Bar, Frankfurt). Sljivo is a type of Brandy made from fermented Croatian plums. The idea came when Markic, a descendant of Croatian immigrants, wanted to bring something new to the Frankfurt drinks market. Tesla himself, hailed from Croatia, before moving to America. He was chosen as the name of the brand as he believe alcohol to be “ambrosia”, or the food of the gods.

Tesla Sljivo is 100% natural plum brandy and lives up to that label. Distilled in Croatia, this is an authentically traditional Eastern European drink. The tell tale plum flavour lasts from nose to finish and intertwines with a vanilla sweetness and cinnamon spice. There is a slight sharpness to the alcohol, which can also be heavily detected on the nose, but this works well with the plum and creates a sharp yet smooth expression.

The Flavor Spiral™ shows the most common flavors that you'll taste in Tesla Sljivo and gives you a chance to have a taste of it before actually tasting it.

Flavour / Taste / Palate
More plums, this time with burst of vanilla and white sugar, hints of nutmeg and cinnamon

Finish
Sharp and lingering, the spices stay behind.

guest, Feb 23, 2016
Very great plum eau de vie from Croatia – Sljivovica at its best! I drank it pure and in cocktails and simply fell in love.