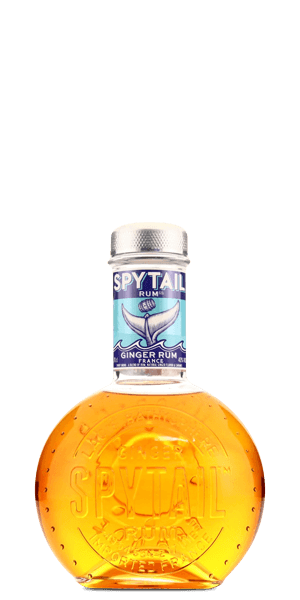 A different style of Caribbean Spiced Rum with a deep and complex note of ginger leading the way.

Biggar and Leith is a revitalization of an 18th century Spirits business founded by the great-great-great-grandfather of the current owner — Mr. Thomas Gladstone — in Edinburgh. The current iteration of Biggar and Leith is based in New York where they manage their small portfolio of adult beverages which are produced locally and mixed and aged under contract with a distillery in Cognac, France.

Spytail Ginger Rum is obviously a spiced Rum. But most spiced Rums focus on cinnamon, clove, and allspice notes. Spytail Ginger Rum puts ginger way up front by macerating fresh ginger root in a blend of Caribbean Rums. The result has a flavor profile like a strong Ginger Beer infused into a dark Rum. And it works really well, especially in tropical cocktails. The ginger and other spices add a good amount of heat that balances the fruit and sweetness nicely.

Smartass Corner:
The Spytail was one of the first mechanical submarines invented in France near the Biggar and Leith distillery partner.

The Flavor Spiral™ shows the most common flavors that you'll taste in Spytail Ginger Rum and gives you a chance to have a taste of it before actually tasting it.

Nose / Aroma / Smell
The aroma is light and sweet with ginger and a bit of smoke.

Finish
The finish is spicy and brisk with ginger and toffee notes.