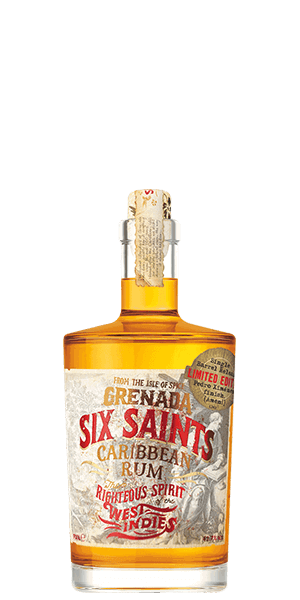 The small tropical island of Grenada in the southeastern Caribbean sea is big on Rum. The islanders have been hand-crafting this Spirit for over 200 years, and the Six Saints Rum hardly moves away from that traditional approach to Rum. Named after the six parishes of Granada, which in turn get their names from saints, it's a pure, West Indian style Rum made from cane, matured in ex-Bourbon barrels and bottled at 41,7%.

This special edition Pedro Ximenez Cask is a single barrel Rum aged in P.X. Sherry casks, with obvious tropical and vanilla hints, but rather more presence than the regular variety.

Smartass corner: The etymology of the word “Rum” is wild and mysterious like Caribbean jungles, with explanations ranging from the last syllable of the Latin word for sugar (saccharum), via Dutch drinking glasses, to “ rumbullion”, a slang term for an uproar (as in drunken sailors beating the hell out of each other).

The Flavor Spiral™ shows the most common flavors that you'll taste in Six Saints Caribbean Rum Pedro Ximenez Finish and gives you a chance to have a taste of it before actually tasting it.