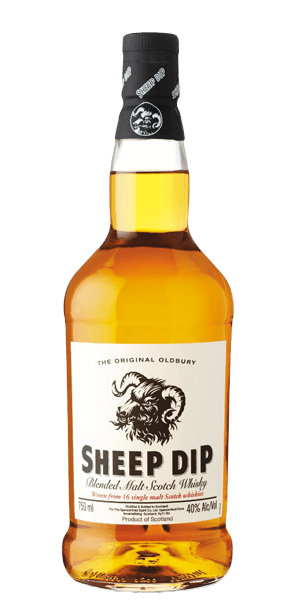 Meee want some.
Spencerfield Spirit Company is based in the magnificent surroundings of the Firth of Forth. It is a family run business, owned by Alex Nicol and his wife Jane. Nicol was previously a marketing director for Glenmorangie before he chose to start his own Whisky adventure and Spencerfield was born. The first product to come out of Spencerfield was the humorously named Sheep Dip, which has been followed up by Pig's Nose and variations of itself.

Sheep Dip is a blended malt brilliantly named after the potent liquid used to delouse sheep. The full-bodied flavour is achieved by weaving together sixteen different single malt Whiskies, aged between eight and twenty years, in specially selected first-fill oak casks. It has been described by Jim Murray as “young and sprightly”, a nod towards its unique taste and smooth qualities.

The Flavor Spiral™ shows the most common flavors that you'll taste in Sheep Dip and gives you a chance to have a taste of it before actually tasting it.

guest, Jan 1, 2021
I’m just getting into Scotch so I can’t extract all of the elaborate tasting notes. To me it’s sweet caramel, completely inoffensive with no prickly peppery feel that I get with others. Also no cayenne pepper/red hots sensation I’ve experienced. Just sweet with a little tang in the back end. Not really complex but so far is my top pick for an everyday background whisky that is really good but doesn’t demand your attention.

Kevin, Feb 3, 2016
This is my go to scotch! It literally has everything I like in a good whisky. It can be as complex or as simple as my mood dictates. All the while, for the right price! I never have fewer than 6 bottles resting in my basement.