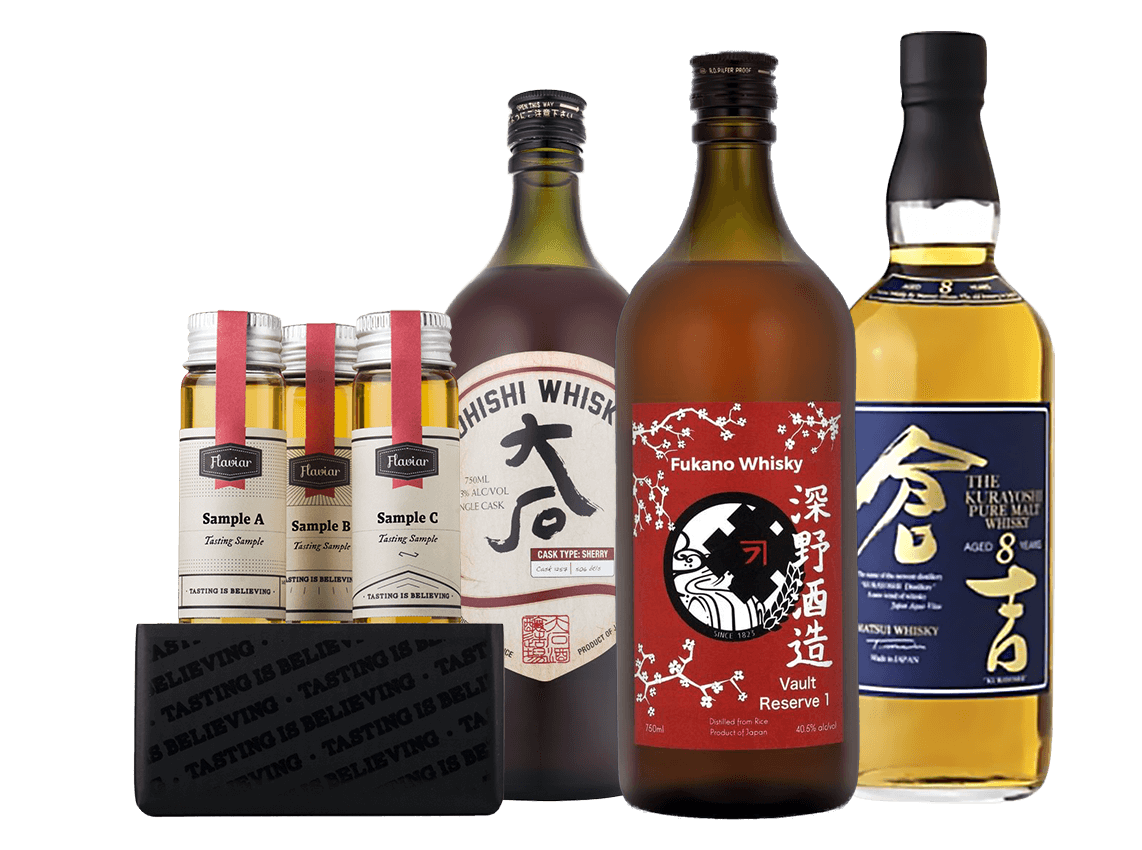 The Secret Flavors Of Japan

The other side of Japanese Whisky

Kurayoshi
Kurayoshi 8 Year Old Pure Malt Whisky
Japanese Whisky
6.8/10
$83.99
Dive deeper into the rich world of Nippon Whiskies
Two guys named Masataka Taketsuru and Shinjiro Torri took everything they knew about Scotch and established Nikka and Suntory. Seventy years later, these two behemoths are the mainstream of Japanese Whisky. But there’s also a rich world of lesser known amber Spirits in Nippon. If those two are The Beatles, these bad boys are The Sex Pistols. Let’s celebrate the new kids on the block!
The Japanese booze landscape is teeming with extravagantly different, under-the-radar, rare and straight up bonkers Spirits: a Sake-like Whisky from ex-Brandy casks made from rice that had koi carp police its weeds; a Scotland-born Spirit from ex-Sherry barrels whose water was filtered through a goddamn volcano; or a ridiculously rare no-age-statement gem from a mythical place. It sounds like we’re making this up, but these are real Spirits and they jubilate the Japanese ingenuity and imagination.
Also, they demand your attention. See, the Japanese took a great tune from Scotland, covered it for a while, then invented a whole new genre with crazy melodies, twists and remixes – and, just like that, they created a new hit! They used to be apprentices, the Japanese, but now they’re kicking ass – even with their lesser known expressions. Put on your leather jacket and hang out with the cool kids.

Kanpai!
Smartass Corner
1) Shorthand for Japanese craft Whisky is “Ji-Whisky”, which appropriately sounds like “gee wizz”, as most of the Whiskies coming from the Land of the Rising Sun are pure poetry.

2) World War II was great for Japanese Whisky, since the armed forces guzzled every drop available. It's still considered the most profitable era.

3) Japanese Whisky has so much in common with Scotch (it was modeled on it, after all), it kept the Scottish spelling without an "e", rather than following the American or Irish tradition.

4) One of the not-so-secret reasons for the unique flavor of the Japanese Whisky is the Mizunara Oak, an ancient tree that's also used for fancy furniture.

5) Japanese laws are quite loose when it comes to Whiskies, and they permit blends of imported and domestic Whisky to be sold as "Japanese Whisky". On the other hand, aged rice and barley Shochu can be legally exported as "Whisky" to the US market - but since the process uses koji fungi to convert starches into sugars, it's illegal to call it Whisky in Japan and EU.

6) In Japan, you can buy travel-sized Whisky bottles from vending machines like a bag of Skittles!
The most popular Whisky drink in Japan is the Highball, a mix of Japanese Whisky and club soda. (Also Winston Churchill's favorite drink, except he drank Red Label.)

7) 20% of calories consumed by humanity come from rice, which is the main ingredient of two of the Spirits in this Tasting Box.

8) Japan is the second biggest producer of single malt Whisky and Japanese Whisky even got better ratings than Scotch in blind tastings.

9) The Japanese drink more Whisky than the Scots and they produce more than the United States.

The Hoppy Spirit Of Boston
When Beer becomes Whiskey
Whisk(e)y
6.7/10
$41.99
Ratings & Reviews
Member Reviews and Ratings of The Secret Flavors Of Japan

Stephanie, May 1, 2020
Definitely different. I liked B Fukano the best. Definitely had to use coke or Diet Coke to mix with though. Too strong for me to sip straight especially C the kurayoshi. Islay Cask (A) was not for me or my husband. We didn’t care for that one at all.

Robert, Mar 21, 2020
Good mix. Three distinct flavors. Since I don’t do too many Japanese whiskey, I can’t say if this was a good representation. I can say that the flavors were good.

Chris, Dec 31, 2019
This was my first sampler I have done and wow was I impressed. I am definitely looking forward to the next one and seeing how that pans out. I even got my wife to join me in the tasting. It gave us something to talk about how we both tasted different notes.

Rex, Dec 23, 2019
Great tasting experience. The Fukano was my favorite. Very nice. Ohishi was at the bottom for me. Too peppery and Smokey for my taste. Fukano was very good as well. Good tasting box.

CLEVELAND, Oct 4, 2019
One of the best tasting boxes I have ever had.
Load more reviews