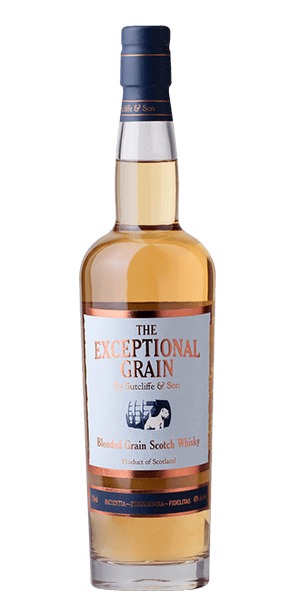 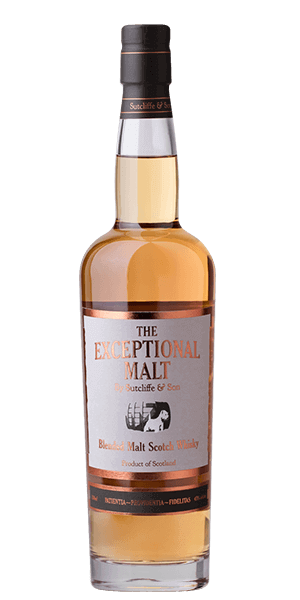 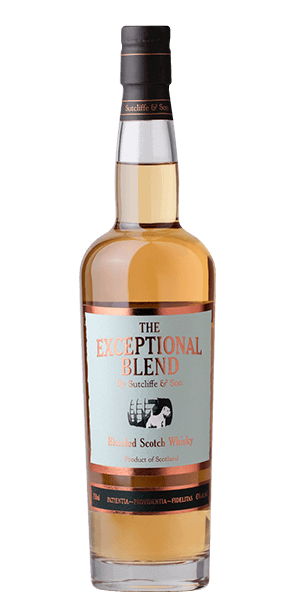 The Exceptional
The Exceptional Blend
Scotch
7/10
Whiskies Worthy of the Hunt
Quick, find a map. Got one? Good. Because in the great tradition of Mel Fisher and Indiana Jones, we’re about to embark upon a lucrative quest—treasure hunting.

But not just any mere treasure. The bounty: a truly stunning line of Whiskies that rival the finest collection of gold jewels and doubloons in the land. And to find it, we’ve got one very simple clue: “ex” marks the spot. “Exceptional,” that is. Are you ready to taste the equivalent of liquid gold? Grab your sable fedora—the hunt for The Exceptional is underway.
Our quest begins with two Whisky-lovin’ mavericks: Don Sutcliffe and Willie Phillips. Don, the managing director of Craft Distillers, decided to pursue a life-long dream to create the most interesting Scotch Whisky in the world. He then teamed up with The Macallan’s former managing director Willie Phillips to make a line of small-batch Whiskies that would rival drams from some of the finest distilleries out there. They dubbed this intrepid new line: The Exceptional.
To assemble the blends, Don traveled to Scotland and worked with both Willie and Master Blender Bill Arthur to select whiskies from several different distilleries. Each barrel was chosen for its distinctive and memorable characteristics. Once the blends were assembled, they were finished in first-fill Sherry casks.
There are a few different types of Whisky you’re going to encounter here—a malt, a grain and a blend. In the past, grains were typically used to add some body to a malt. It was rare thing to have them stand on their own merit. In fact, some people continue to argue that single malts are the only Whiskies worth savoring. But in our opinion, single malt snobbery has no place here.

Plenty of countries are innovating with grains and blends, and they’re creating some pretty spectacular drams. In fact, to make a truly sublime blended Whisky, it takes the immense expertise of a master blender to create a balanced and harmonious drink. How do you like ‘dem grains now?
And now, the time has come, ye thrillseekers. The taste of treasure is just beyond the horizon. The question is: are you ready to seize it?
Cheers!
Smartass Corner:
1) Blended malts account for about 8% of the Scotch Whisky market. Blended malts are a mix of malt Whiskies (made from malted barley only) from different distilleries.

2) Speaking of single malts, most people tend to think that they’re the product of one cask. But they’d be wrong—it’s actually the product of a single distillery and may come from several casks there.

3) A crystal decanter of Macallan Imperiale ‘M’ Whisky scooped the prestigious title of world’s most expensive Whisky when it sold at auction in Hong Kong for $628,205 in 2015.

4) What’s the difference between a grain and malt Whisky? For that, you’ll need to look to the ingredients. Grain Whisky is made from any grains, including but not limited to, wheat and corn. Malt Whisky, however, is strictly made from malted barley.

5) A blended Whisky is a mix of many different grains and malts from a whole slew of distilleries. And while single malt gets a lot of top billing these days, the interplay between grain and malt Whiskies in a blend can provide a different kind of depth to your dram.

6) 90% of all Scotch Whisky released in the market is a blend. That’s a hell of a lot.
Rumor has it that fictional treasure hunter Indiana Jones had a low tolerance for alcohol. But when he did mosey up to a bar, his poisons of choice were Whisky and Tequila.

The Exceptional
The Flavor Spiral™ is a quick, clear and visually-appealing way to look at the drink's flavor DNA. 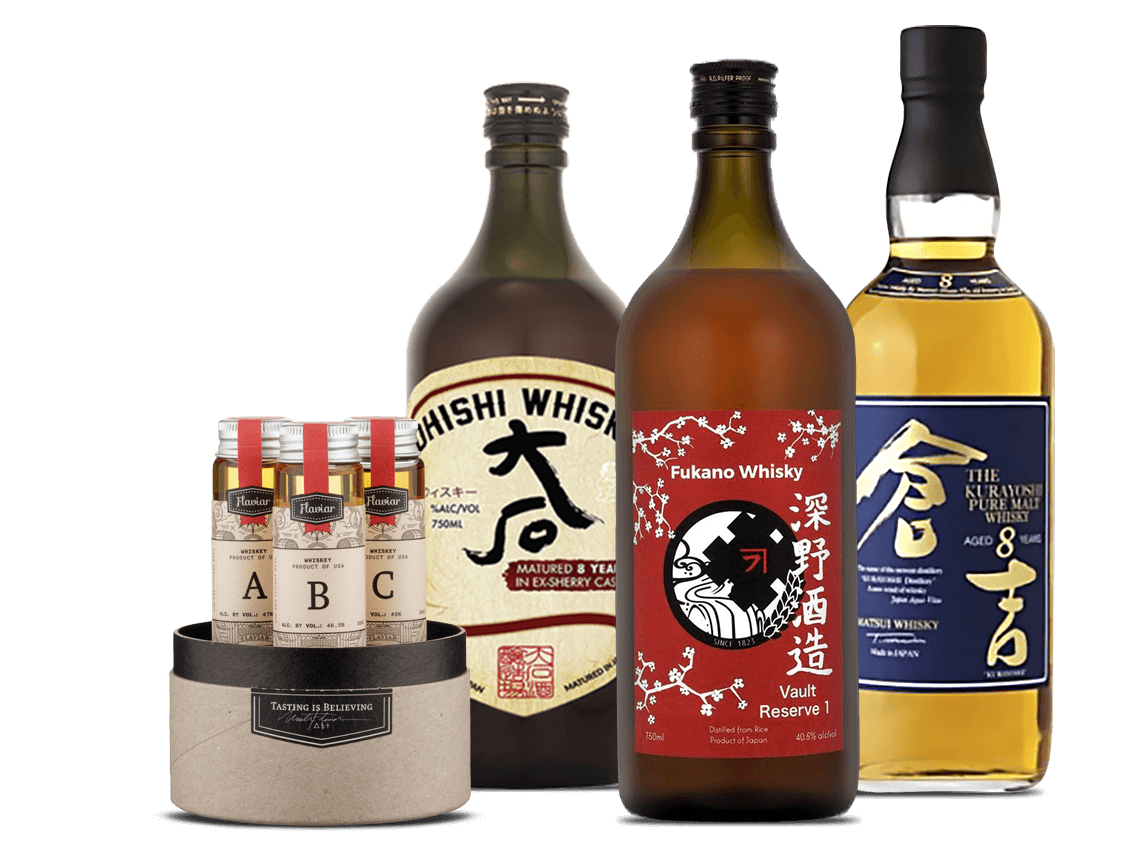 The Secret Flavors Of Japan
The other side of Japanese Whisky
Whisk(e)y
7.1/10
$45.99
Ratings & Reviews
Member Reviews and Ratings of The Exceptional

Steven, Nov 20, 2020
If you're a beer lover and want to get into scotches, this is likely a great introduction set for you. If you're someone who loves scotch and wants it ruined by a lingering taste of beer, then this is for you! in short --- regardless of any other flavors present, the taste of beer is so overpoweringly present throughout and after sipping these drinks, no other flavor is acknowledged.

Mathew, Oct 29, 2020
These are decent whiskys, but not great. They have nice flavor and are relatively smooth but they’re not challenging. There’s really nothing exceptional about them.

Robert, Oct 27, 2020
Great first exposure to Flaviar. The variety educated my palate and narrow my preferences and tolerances. All three are good choices. Try them and enjoy. Hi

Brad, Sep 29, 2020
My first tasting box. I must say it’s an eye opening experience to have them side by side. I look forward to trying many more.

Norman, Aug 1, 2020
The single grain was nice, definitely noticed the apple and orange peel at the finish. Did not care for the single malt, spice was overpowering. The blend was wonderful. The rose was refreshing to the nose. Enjoyed the smoothness of the caramel. The finish was balanced.

Gardner, Jun 20, 2020
The malt blend is fantastic. The grain is fine. Haven’t tried the other yet

John, Jun 14, 2020
The Exceptional Grain and Malt were the top of the tasting. The Grain had a nice Vanilla taste to it.

Frederick, May 23, 2020
I loved the vanilla base, sweet taste of the Grain Exceptional.

Bradley, Apr 3, 2020
A very well thought out selection of whiskeys I enjoyed the exceptional malt the most out of the three. The second is the exceptional grain and the third the exceptional blend. I found that all three whiskeys are easy drinkers and the flavor swirl that comes with them shows accurate notes if you like Speyside or Highland malt whiskeys excellent choice to explore new complicated notes.

Ryan, Apr 2, 2020
The Blend was my favorite based on the kick it has. Great first sample set.

Ryan, Mar 18, 2020
All three were smooth & pleasant to drink. A was too light for my taste. A was extremely delicate with a subtle nose. Would recommend for those new to Scotch. B was my favorite of the three, with a nose that brings you to Scotland and a rich oakiness that completes a robust flavor that finishes smooth. C fits right in the middle of A & B with some floral notes that elevate it above A in my book but without the light oak/peat that I enjoyed from B. I found a couple drops of water helped to bring out some of the more subtle flavors hidden in C. This is an excellent 1st box for anyone venturing in Scotch. If you enjoy the Scotch with heavy peat this is not the box for you.

Lori, Mar 15, 2020
Individual ratings differ. Like the Grain the best and the Malt the least.

Richard, Feb 19, 2020
Great tasting box for my first choice. Overall the Blend (C) was the preferred one. with the Grain (A) a close 2nd. Nice to taste the differences amongst the 3.

Matt, Jan 20, 2020
Something different, enjoyed each one thoroughly!

Debra, Jan 10, 2020
Was not impressed....however, I am a Bourbon drinker and not Scotch! But will definitely not purchase!

Michael, Dec 8, 2019
I thought the colors were gentle and the aromas went from gentle to robust. I liked exceptional grain. It had a good flavor and gentle on the palate and a good after taste without the burn on the back of the throat. The exceptional malt was much more bold. I did not care for it because the taste was too strong and burned. The exceptional blend was my favorite. It had very nice individual flavors and not so harsh. If I had to choose. I would choose the blend. I am not really a scotch drinker though.

Richard, Jun 8, 2019
All of these were great. The first was smooth and buttery, the second was similar but more citrusy, the third had an almost peaty smoky flavor. All were delicious, I would buy any one of them for my home bar.

Matthew, Oct 27, 2018
A was good but weak. B was the opposite strong and not good. C was strong and smooth but a little bitter for me

Wesley, Apr 7, 2018
First of I want to say “thank you” for Flaviar building a sample box of this somewhat hyped up whisky. I reviewed each sample individually. I found none of these to my liking. The flavor profile included in my sample box was nothing like what is shown on the website. The one included in my sample was very accurate. Sour beer is the prevailing flavor of two of the samples. I appreciate the sample. It lets me know what not to buy.

Matt, Mar 25, 2018
Liked the grain the best, followed by blend, then malt. A good taster overall. I would be happy to have a full bottle of any of these whiskeys.

Antti, Jan 28, 2018
It is an outstanding, collection of blended whiskies.

Douglas, Jul 21, 2017
I thought they meaning all were a bit harsh. Not as good as ones I like such as Scoth and some bourbons
Load more reviews