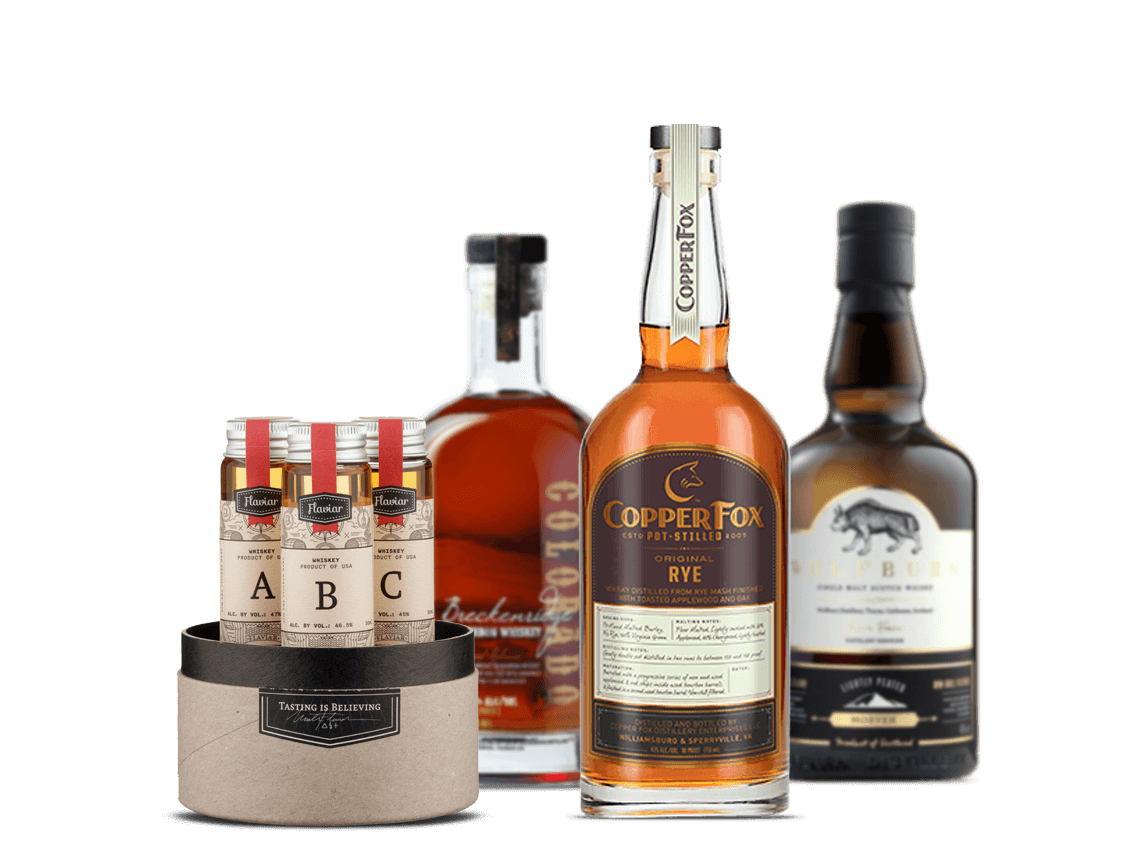 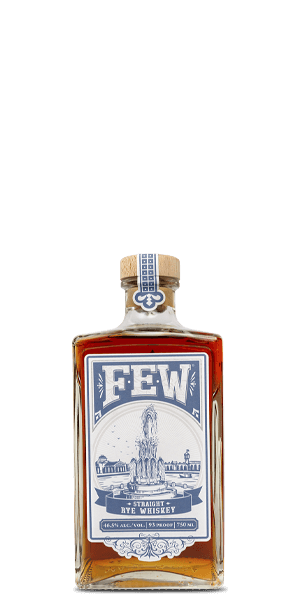 Wolfburn
Wolfburn Morven
Scotch
5.6/10
$98.99
The Cornerstone of Good Taste
Ahh, the Welcome Box. La grande entrée into the world of fine Spirits. A paragon of good taste and a harbinger of your membership journey with Flaviar. Once you’ve savored its contents, there’s no turning back—the rabbit hole is deep and Wonderland awaits. It’s going to change the way you taste.
When picking the right Spirit for the job, Whisk(e)y became the obvious choice. It’s a charming and sly devil that fires on all cylinders when on your lips, and it goes down smoother than Don Juan’s most precious pick up lines. In short, it’s a proper badass.
There are many countries capable of making excellent Whisk(e)y and eventually you’ll get to know them all. But for now, you have three to kickstart your journey of spiritual enlightenment. The spirits we chose are not necessarily established, but they’re young and brilliant—and that goes perfectly with the Flaviar creed.
You’ll start by getting a taste of some real sugar straight from a young prodigy distillery that’s already earned quite a few stripes—Breckenridge. Their Bourbon is their signature product and it sets the bar sky high for all blended spirits, so ready your rockets.
Now, let’s make a giant leap for mankind and head all the way across the pond to the U.S.. FEW Rye Whiskey heralds the renaissance of Rye. Aye, Rye is making a comeback and we found one that’s young, fierce yet really smooth around the edges. It fits this Box like a glove.
But to really know Whisky you’ve got to go back to the roots… Scotch. Wolfburn is a Highland Scotch from the northernmost mainland distillery but with a peaty twist. We love it and so will you. But beware—you might love it too much!
And with that, ladies and gents: Slàinte & Cheers!
SmartAss Corner
1. If you can’t take the heat, well… make some Bourbon. Temps inside American warehouses are much higher than in other Whisky-making regions, so the pace of maturation for a Bourbon is much faster than, say, for a Scotch Whisky.
2) What separates a Bourbon from the rest of the Whiskies? Well…
It has to be made from a grain mixture that is at least 51% corn.
It must be distilled to no more than 80% ABV and entered into the barrel for aging at no more than 62.5% ABV.
It must be aged in a brand-new, charred white oak barrel.
It has to be be matured—even if it’s only briefly. If a bottle does not bear an age, it’s at least four years old. If it’s been aged for a minimum of two years and does not have any added coloring, flavoring or other spirits, it may be called straight Bourbon.
Bourbon that has an age stated on its label must be labeled with the age of the youngest Whiskey in the bottle.
It must be bottled at 40% ABV or more.
3) The craft Bourbon boom is very real. The number of craft distilleries in the U.S. exploded from around 50 to well over 1,000 in just ten years.
4) Seems like wealthy tycoons John D. Rockefeller and Andrew Carnegie knew how to take a joke. During one Christmas exchange, Carnegie sent a fine Whiskey to Rockefeller—a devout baptist who had given up drinking.
5) Rye—think of it as Bourbon's edgier, spicier cousin (you know the one… ahem). It’s known for imparting what many call a spicy or fruity flavor to the Whiskey. Rye (distilled from at least 51% Rye), is not very sweet and tends to have a spicier body. That’s why your Rye cocktail tastes a bit drier than it’s Bourbon counterpart.
6) Evanston, Illinois—the home of the Temperance Movement—remained dry for over a century. You can thank the master distiller at FEW for overturning those laws and becoming the city’s first distiller of grain spirits. Someone start working on a statue of this man, ASAP.
7) Rocky Mountain… high? Yep. Breckenridge Distillery is located at an altitude of 9600 feet in the Rocky Mountains, high enough to earn it the title of “World’s Highest Distillery.” And yes, we’re pretty sure that the irony was intended.
8) When it comes to welcoming people, Tibetan monks stick their tongue out. But in the U.S., it’s probably a good idea to leave that behavior to the toddler set.
9) What’s in a name? When it comes to Whisky (or Whiskey), turns out it’s quite a bit. The spelling differs geographically. Countries that have E's in their names (like the United States and Ireland) tend to spell it WhiskEy. Countries without E’s in their names (like Canada, Scotland and Japan) spell it Whisky. Hope that clears a few things up.
10) Nikola Tesla was convinced that if he drank Whisky every day, he’d live to be 150. Hey, no harm in trying.

Wes, Mar 11, 2021
Top notch selections across the board. I love whiskey, and all are fine samples.

Philip, Mar 6, 2021
The bourbon and rye were both good. The smoky flavor of the scotch was overpowering and not pleasant. I would not drink the scotch again.

Price, Mar 26, 2021
Completely agree. The rye was great! The bourbon was just okay. But the scotch was awful!

Mark, Mar 5, 2021
Very much so enjoyed the Rye. The bourbon was okay. The scotch was quite smoky (got too much the more of it I drank). I was pleased with the variety and am discovering more and more what I like!

Andria, Mar 3, 2021
Loved the rye so much I’m planning on purchasing a bottle. The scotch was too smoky for me. The bourbon was delightful.

JUSTIN, Feb 23, 2021
What a fun time to really start to expand my Bourbon vocabualry!

Jonathan, Feb 22, 2021
Scotch was lovely, bourbon was okay and I’m still not the biggest fan of rye!

Fred, Feb 17, 2021
Welcome box: I enjoyed the Wolfburn Morven, the heavy Smokey taste was quite interesting. The Breckinridge Bourbon was also good, but I did not care for the Few Rye Whiskey. I am looking forward to my next tasting.

Kevin, Feb 4, 2021
Breckenridge was very good however the Wolfburn was horrible

Jennifer, Feb 3, 2021
For the “welcome” box I wasn’t overly impressed. Breckenridge was the star of the samples, while Wolfburn left me disappointed.

Newton, Feb 2, 2021
I didn't like the scotch, I couldn't get beyond the smoke, it was too dominant. It was supposed to be lightly peated but seemed quite strong to me.. The bourbon was good, but just a bit above average and not overly memorable. I felt the rye was the best of the 3.

Mark, Jan 29, 2021
I love all three selections. I have not heard of any of the three tastings. I have not had a lot of scotch, but most I have sampled have a strong peet aroma and flavor. The Wolfburn Single Malt Scotch is smooth and balanced.

Scott, Jan 24, 2021
Bourbon was something I would purchase but the scotch was terrible

Shaw, Jan 19, 2021
I feel like the selection could've been better, but glad I tried this and to be a member of Flaviar. That said, I hope my next tasting exceeds my expectations, because I don't feel my notes in what I like were taken into account.

Loren, Jan 16, 2021
I was hoping for better. The Breckenridge sat with me the best overall. Few had an unexpected taste but not one I would buy again. Wolfburn tasted like turpentine.

Matthew, Jan 14, 2021
Scotch is very peaty I probably would stock my bar with the bourbon but the rye was nice.

Conor, Jan 12, 2021
Tried with a friend. We both agreed that the bourbon was the best part. Could definitely taste the spicy-ness of the rye. The scotch was our least favorite due to the strong peat flavor which we found overpowering.

Alex, Jan 12, 2021
Very good flavors that changes with every taste. Definitely experience with drops of water to change the chemical balance.

Garrett, Jan 11, 2021
I really really enjoy the tasting box experience. It makes me feel like a true aficionado. That being said, the choices in this box were...ok. At the time of this review, they included the Breckenridge Bourbon, the Few Rye Whiskey, and the Wolfburn Morven Scotch. The bourbon was the best of the three and got a 8 stars out of ten. Smooth and crisp, could see it being a daily drinker. The Rye was my least favorite of the three, at 6 starts out of ten. There was an imbalance of sweet and spicy that my taste buds just could not get on board with. The scotch was a nice middle of the road spirit. Good peat, but just a bit too much medicine taste for my liking. All in all, the box gets 7 out of 10 stars.

Michael, Jan 8, 2021
This was a great variety introduction package.

Cory, Jan 6, 2021
Nice range from the 3, I don't typically like this region of Scotch, but it was tasty. Bourbon would be a nice daily drinker.

benjamin, Jan 6, 2021
All in all, good representations of solid spirits in their classes. The Breckinridge is well balanced. The wolfburn is a good, solid peated whiskey. Beware, the pic is incorrect as the FEW rye is not pictured and Copperfox is not a part of this set. FEW makes a good rye whiskey, a good example of one if you haven’t had one before.

David, Jan 5, 2021
Liked all three whiskies and would buy all of them again! The Breckinridge was number one of the bunch!

David, Jan 5, 2021
The whiskey was sooo good and I’m not a whiskey guy. The bourbon was good too. I couldn’t do the scotch at all - reminded me of bad mouthwash.

Dennis, Jan 1, 2021
I enjoyed both the bourbon and the rye. The bourbon was pretty smooth with a decent finish, and the rye was nice with the hints of honey and caramel. I didn't care for the scotch.

Jordan, Jan 1, 2021
Tasty overall, but if you’re not a scotch lover, get ready for a smoke party.

Rickey, Dec 27, 2020
Not sure if this membership adds anything to my life yet. I hope it get better welcome box I like B. C I don’t think they tasted it before bottling .

Matthew, Dec 26, 2020
The bourbon was the most flavorful. I’m still not convinced about rye. Too spicy. The scotch was decent though.

Luke, Nov 23, 2020
It was good, the scotch was really interesting but not bad. Loved the breckenridge one
Load more reviews