Guillon Painturaud
Guillon-Painturaud VSOP Cognac
Cognac
7.2/10
Ah, the French. Arbiters of style and delectable taste. And when it comes to their Spirits, that definitely holds true. In fact, France has a rich history when it comes to making booze, one that’s changed and evolved throughout the centuries. However, one thing remains the same: they consider each of their homegrown Spirits — Calvados, Cognac and Armagnac — precious and unique gems.

Up in the Normandy region, Calvados reigns supreme. Over 100 different varieties of apples go into making this distilled Brandy, and they’re each blended to create a harmonious flavor. Bitter varieties contribute flavor, tart specimens offer acidity and the sugar in sweet varieties help aid in fermentation.

Cognac, however, is a stickler for the rules. First of all, it can only be produced in the Cognac region of France — so don’t try any funny stuff past the border. Also, the grapes that are typically used to make it are the Ugni Blanc, which are then double distilled in a copper pot still.

But down in Gascony, Armagnac is the thing. Although this French grape Brandy gets second billing to its more popular cousin Cognac, it delivers a more punchy and in-your-face flavor. The rules aren’t as stringent when it comes to Armagnac, but typically, the juice is column distilled and aged for a longer period than Cognac in Limousin oak casks.

Now, in this box, we have some righteous representatives from each camp:

Ready to raise your glass to these hometown heroes? A votre santé!

1. In 1942, Calvados received its AOC (Appellation d’origine contrôlée) designation, protecting and regulating its method and region of production. Cognac scored its AOC in 1936.

3. Rancio is a highly desirable, nutty flavor normally found in extra-aged fortified wines (think: Port, Sherry, Madeira, Marsala) and fruit-based Spirits like Cognac, Calvados and Armagnac (ahem!). It appears in Cognac after roughly 10 years of aging in oak casks and intensifies as it ages.

5. Speaking of ABV, Armagnac edges out Cognac by a few percentage points. Cognac must be at least 40% ABV while Armagnac typically falls between 46% to 48% ABV.

6. The best way to enjoy a Calvados or Cognac is in a balloon-shaped snifter. Armagnac? Try a Champagne flute or a tulip-style glass instead.

7. Believe it or not, the French aren’t all that fond of Cognac. In fact, they export nearly 90% of their production.

Guillon Painturaud
The Flavor Spiral™ is a quick, clear and visually-appealing way to look at the drink's flavor DNA. 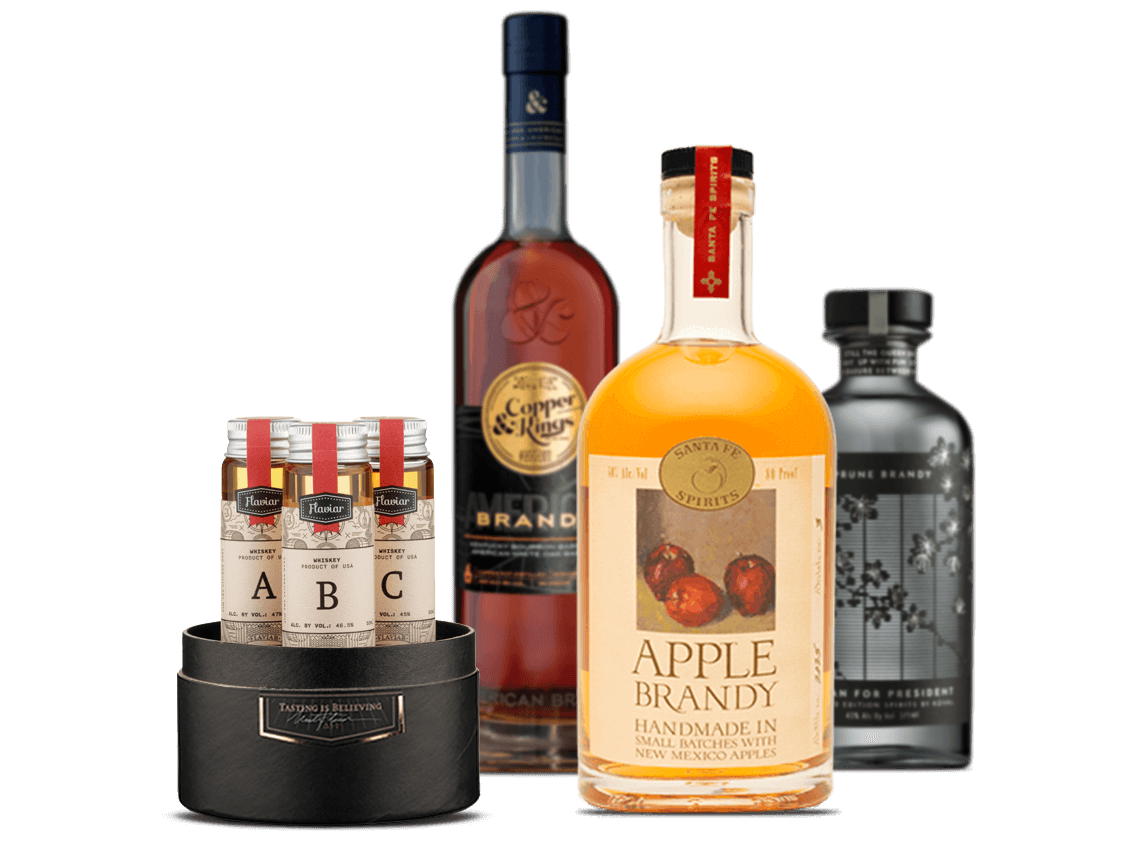 Dennis, Apr 10, 2021
Felt like a middle of the road selection. None of the three really stood out to me. The calvados was disappointing, the armangac and cognac were good. Would not buy the calvados. Neither armangac nor cognac spiked interest enough to purchase the bottle.

Christopher, Feb 4, 2021
Really interesting for someone like me who has limited experience with cognacs and brandies. One was deliciously sweet, while the other two were far fryer than I expected (but still lovely). A great sampler for palate expansion!

Miriam, Jan 26, 2021
What a wonderful opportunity to taste the distinctive liquors of France. Three very different flavour that would appeal to different palates.

Carl, Jan 12, 2021
Loved getting to try all three. The armagnac was definitely my favorite.

Joseph, Dec 4, 2020
Really enjoyed this - I am not usually a cognac drinker but wanted to give it a try and had fun with this set.

Ryan, Nov 15, 2020
Really enjoyed this kit. The calvados wasn't my favorite but it was interesting, and the armagnac and cognac were delicious. Highly recommend if you've been curious about brandy.

John, Nov 14, 2020
Liked the Armagnac the best but someone mentioned jet fuel. The other two were not my jam! Was hoping for more but I guess I'll stay a whiskey lover.

Casey, Sep 20, 2020
Loved the Armagnac, the cognac was good as well. Not fans of the calvados, though we’d be happy to try another one (maybe aged longer). The Armagnac was definitely the star of the show.

Jamie, Aug 4, 2020
Maybe not my thing. High alcohol content makes it hard to sip and enjoy. More like jet fuel.

Jaron, Jul 24, 2020
Good variety of French brandies each with distinct tasting notes. I’ve had better Cognac and Armagnac but this would make a good introduction to French spirits.