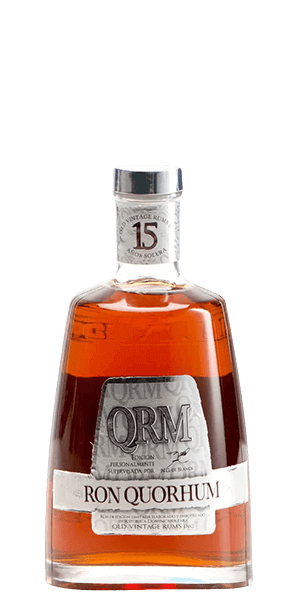 This is how you make a fifteen year old Rum taste even better.

The Ron Quorhum brand of Caribbean Rum is premium line of Rums from Oliver and Oliver — arguably one of the finest and most prolific producers of high-end Rums from all over the Caribbean and Central America. For generations, Oliver and Oliver have been distilling some of the most sought-after fine Rums in the world. They identified Ron Quorhum Rums as some of the best coming out of the Dominican Republic and acquired the company to establish that nameplate.

When you see the name “Quorhum 15 Anos Solera” the first thing that should jump out at you is the word “Solera.” This means that the casks are never fully emptied — rather a portion of the Rum from the previous batch is left in the cask and new spirit is added. This means that the age statement — in this case fifteen years — is the youngest Rum in the bottle and there are undoubtedly some very old portions of Rum in there as well. So even though this Rum is listed as a very respectable fifteen years old, it tastes even older than that.

The Flavor Spiral™ shows the most common flavors that you'll taste in Ron Quorhum 15 Year Old and gives you a chance to have a taste of it before actually tasting it.

Andreas, Nov 11, 2019
Good sipping rum. But there are better and cheaper ones