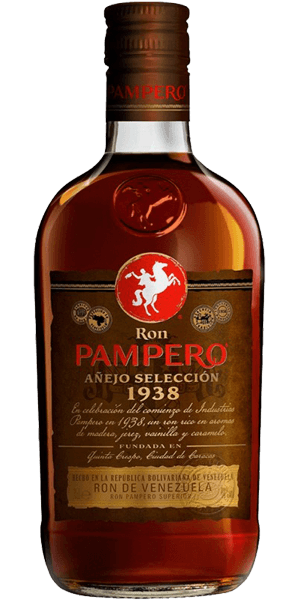 Venezuela's first.
Based in Venezuela, Pampero Distillery was established in 1938 by Alejandro Hernandez, the son of a fisherman from Isla de Margarita. The Rum produced here is some of the best in the country and was the first to be awarded the title “anejo” (aged) from the Venezuelan government. The sugarcane used to create this Rum is harvested during the humid dry season and it is for this reason that many say Ron Pampero is incredibly smooth.

Ron Pampero Anejo Seleccion is a very fine Dark Rum. Having been matured for 5-6 years in oak casks, the flavours are complex and smooth. This Rum is an exploration in sweetness, mixing together such saccharine delights as Demerara sugar, honey and dark chocolate. But this does not mean that this is simple, one flavour drink. The oak barrels used for ageing this Rum have given it depth and richness with a little hint of spice. The linger on this Rum is perfect, allowing you just the right amount of finish to make you want another taste.

Flavour / Taste / Palate
Honey takes the lead and combines with the sugary sweetness on the nose, vanilla spice is also present and only the slightest hints of dark chocolate, complemented by dried fruits and raisens to give a fruity burst

The Flavor Spiral™ shows the most common flavors that you'll taste in Ron Pampero Anejo Seleccion and gives you a chance to have a taste of it before actually tasting it.