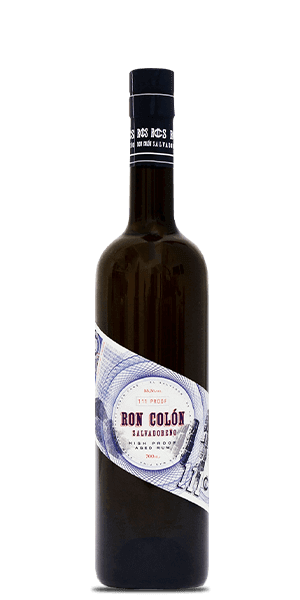 A delicious blended Rum that radiates the pride of El Salvador.

In 2018, Thurman Wise and Pepijn Janssens traveled across the America's touching sixteen countries in just twenty-two days. In the middle of that journey, something about the tiny Central American country of El Salvador stayed with them — the people, the local Rums, the fine coffee plantations, the simple life and faith inspired them. They have created Ron Colón Salvadoreño Rums to bring that inspiration to life.

Ron Colón Salvadoreño Aged Rum is the core Spirit used at Ron Colón. Not only is it the base for their coffee-infused Rum, they sell it as is — a premium aged Rum blend of fine molasses Rums. That blend is comprised of 70% six year-old column-stilled Rum produced by the Licorera Cihuatán Distillery in El Salvador, 15% Jamaican pot-stilled three year-old, and 15% un-aged pot stilled. This lovely, Spanish-style dram won the 2020 Gold medal at the San Francisco World Spirits Competition and is bottled at a near cask strength of 55.5% ABV.


Smartass Corner:
The word "Colón" has nuanced meaning in El Salvador. It can refer to Columbus and is the unit of currency.

The Flavor Spiral™ shows the most common flavors that you'll taste in Ron Colón Salvadoreño Dark Aged Rum Tbox and gives you a chance to have a taste of it before actually tasting it.

Nose / Aroma / Smell
On the nose you will find notes of exotic fruits from banana to pineapple over a rich note of marzipan, walnut bread, and wood spices.

Flavor / Taste / Palate
The flavor profile is full-bodied and rich, building on the aromas with more tropical fruits, a nice chocolatey note, roasted almonds, and vanilla.

Finish
The finish is long and smooth for such a high ABV.