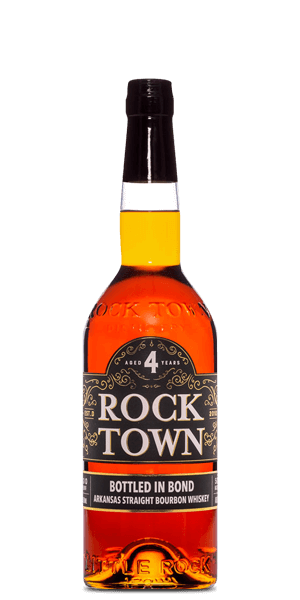 This four year-old Bourbon is bottled-in-bond and one of the best this year.

Founded in 2010, Rock Town Distillery is the first legal distillery in Arkansas since the dark days of Prohibition. Phil Brandon founded this Little Rock-based operation as a real-deal grain-to-glass distillery — gathering corn, wheat, and rye from within 125 miles of their doors. And things have gone well since day one. Whiskey legend Jim Murray named their signature Bourbon "US Micro Whiskey of the Year" in 2015. Today they deliver a wide range of Spirits to the US, Canada, and the UK.

Rock Town makes no fewer than eight Whiskies, but the one you need to know about right now is Rock Town 4 Year Old Bottled in Bond. This four year-old Bourbon has a mash bill of 82% corn, 9% wheat, and 9% malted barley. This wheated mash bill is similar to some of the best, most cherished Bourbons — Weller and Pappy have a bit more wheat, but they’re in the same direction. No, we’re NOT saying that Rock Town Bottled in Bond is "as good" as Pappy Van Winkle. We’re saying that it’s influenced by them… built on the same idea. And since it’s also bottled at 50% ABV, you will taste that idea at full power.

Smartass Corner:
As you may remember, "Bottled in Bond" means that the Bourbon was distilled in a single season at a single distillery, is aged in a Federally guarded warehouse for at least four years, and is bottled at a minimum of 50% ABV.

The Flavor Spiral™ shows the most common flavors that you'll taste in Rock Town 4 Year Old Bottled in Bond Bourbon and gives you a chance to have a taste of it before actually tasting it.

Nose / Aroma / Smell
The aroma is everything you’re looking for with balanced notes of caramel and toffee over vanilla, cocoa, and mint.

Finish
The finish is long and sweet with malt and spice.