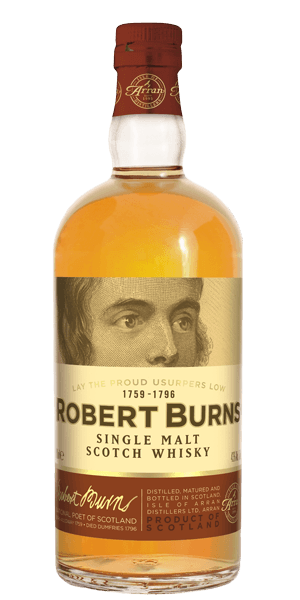 An Ode to Robert Burns!

Arran, the only distillery on the Isle of Arran, was founded in 1994 by Harold Currie, a former Chivas Brothers director. While this distillery is relatively new it has already proven that it is capable of producing outstanding Whisky. In the past 20 years they have won a number of prestigious awards and accolades. Most of their liquid gold turns into single malts, but they produce blended Scotch as well as liqueur. It shows that great Scotch can be produced even with a lack of decades or centuries of tradition in a distillery. Arran is one of the last remaining independent Scottish distilleries.

Robert Burns is an official Arran Single Malt which has been endorsed by The World Robert Burns Federation. It was matured 70% in American oak casks, and 30% in Sherry casks. It’s ideal prior to or during a meal. Better, yet, with friend. No artificial colouring on this one. An ode to Robert Burns, a famous Scottish poet.

The Flavor Spiral™ shows the most common flavors that you'll taste in The Robert Burns and gives you a chance to have a taste of it before actually tasting it.

David, Feb 18, 2021
A sweetness, even in the nose. Very pleasant on the tongue with a build up and deliver in each taste. (makes me want to recite poetry...)

Greg, Apr 16, 2020
Nice sipping scotch. Not overly complex. Honey and vanilla are notable with barley and possibly a touch of heather. Enjoyable and affordable.