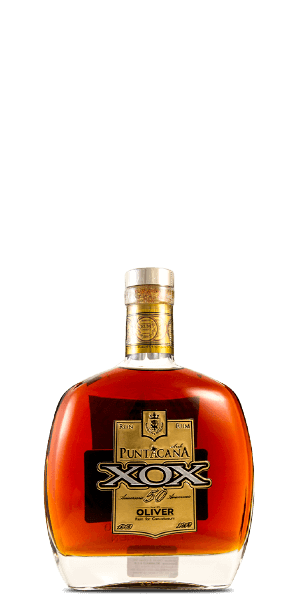 A delightful Rum from the Dominican Republic solera-aged in Single Malt casks for a fruit-forward flavor profile.

Oliver Juanillo came to Cuba in 1868 as a young Spanish soldier defending Spain’s claim on the territory. When his military service concluded, he founded a plantation farming tobacco and sugarcane. Within twenty years he was distilling Rum using the cane he grew — passing his plantation and Oliver & Oliver Distillery on to his children. But in 1963 the Cuban Communist Revolution forced the family to flee — but they didn’t go far. The next island over was Hispaniola, and the family set up shop once again on these friendly shores of the Dominican Republic where they distill some of the finest Dominican Rums to this very day under nineteen different brands.

For the Puntacana Rum line, Oliver & Oliver use Tomatin Single Malt casks to age the Rum. As the name implies, Puntacana XOX 50 Aniversario Rum was created to celebrate the fiftieth anniversary of the new Oliver Distillery in the Dominican Republic. The Spirit is Solera-aged up to twenty-five years, yielding a rich, fruit-forward experience.

The Flavor Spiral™ shows the most common flavors that you'll taste in Puntacana XOX 50 Aniversario Rum and gives you a chance to have a taste of it before actually tasting it.

Nose / Aroma / Smell
The aroma is deep and complex with plenty of exotic fruit notes over a caramel base.

Flavor / Taste / Palate
The flavors are well balanced — not too sweet and not to sharp — with notes of ripe banana, brittle toffee, nutmeg, and clove.

Finish
The finish is long, rich, and sweet.