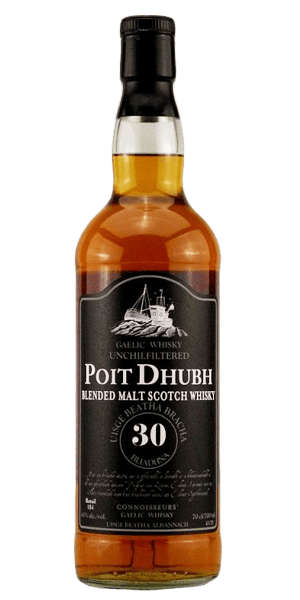 Poit Dhubh 30YO Malt Whisky is their rarest expression. This extremely limited release is a Blended Malt Scotch that is said to contain a lot of Talisker, since it’s the only distillery on the Isle of Skye. The other single malts remain a mystery, but apparently it combines Speyside and Highland Scotch Whiskies, too. It’s aged in Sherry casks, bottled at 46%, without chill-filtration. It’s important to know, that they offer an 8, 12 and 21 version of the Poit Dhubh, too, as a more standard offering, but the 30YO is really, really hard-to-find. Scout their website… it’s not there. It’s a mystery. But we have it. And so can you.

The Flavor Spiral™ shows the most common flavors that you'll taste in Poit Dhubh 30YO Malt Whisky and gives you a chance to have a taste of it before actually tasting it.