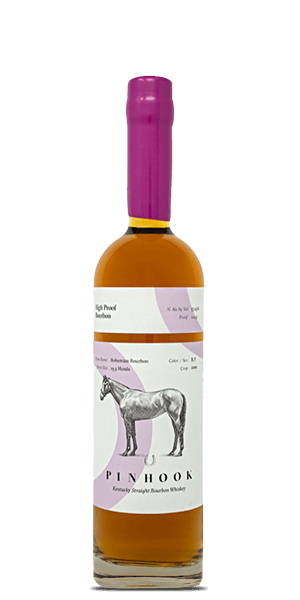 Pinhook High Proof Bohemian Bourbon is special in several ways. The first is that this particular dram was the first Bourbon in more than fifty years to be produced at the refurbished Castle & Key Distillery. The second special thing is that it is bottled at an impressive 57.25% ABV. The third special thing is that there were only one hundred barrels of this inaugural release, and we managed to get our hands on a few cases.

The Flavor Spiral™ shows the most common flavors that you'll taste in Pinhook High Proof Bohemian Bourbon and gives you a chance to have a taste of it before actually tasting it.

Flavor / Taste / Palate
With a splash of water the taste is spot-on for a high-corn dram with notes of caramel, almonds, cocoa, exotic fruits, and a bit of dark chocolate.

Finish
The finish is long, warm, and hot.

Adam, Feb 5, 2021
I really like the Carmel and fire combo as it opens up with some ice it mellows

Alex, Dec 21, 2020
Excellent bottle... for what it is, which is a young bouron. The depth and complexity are lacking, but it is incredibly well balanced and the sweetness level is spot on for my preference. Needs a few drops of water or a single cube to dilute slightly with a mild chill. Cheers!

Brian, Oct 28, 2020
Not a tremendously tasty pallet. Was Better with ice or mixed with a soda.

Justin, Oct 1, 2020
Such a different tasting experience. I’m not sure I would purchase this again. A decent sipper, but not one I would go out of my way to find.

Shaun, Aug 27, 2020
Great bourbon! Has a pretty unique flavor and was an easy drinker for a high proof bourbon. Has notes of fruit and almond. Highly recommend.

Kevin, Jul 14, 2020
Super smooth for a high proof bourbon. My second bottle from Pinhook, both outstanding!