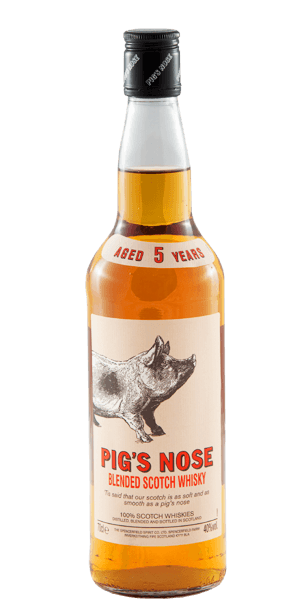 As soft as a pig’s nose.

Spencerfield Spirits was set up in a small town in Scotland by Alex Nicol, a former marketing director at Glenmorangie. Spencerfield is a family run business dedicated to producing quality niche alternatives to more known conventional mainstream brands. Their flagship product is the Sheep Dip and Pig’s Nose is its stable mate – both curiously named due to the fact that the blender is located on a farm.

Pig's Nose 5YO is a blended Scotch Whisky made with 40% single malt, created by Richard Paterson, Scotland’s only third-generation master blender. Pig’s Nose is known for being soft as a pig’s nose – it’s smoothness apparently achieved through a blend of first-fill oak cask-aged Speyside, Islay and Lowland malts with superior Invergordon gentle grain Whiskies.

The Flavor Spiral™ shows the most common flavors that you'll taste in Pig's Nose 5YO and gives you a chance to have a taste of it before actually tasting it.

guest, Dec 6, 2019
This was my first bottle of whisky/scotch. Felt like a really good place to start.