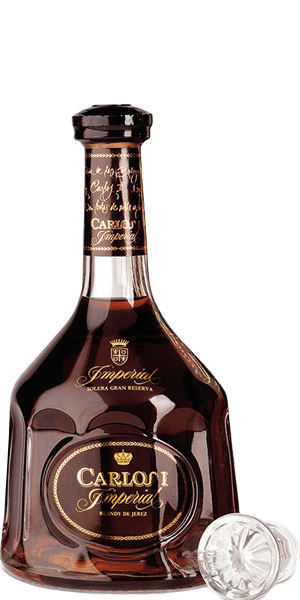 The Osborne distillery was founded over 200 years ago, in 1772, in the Andalusian town of El Puerto de Santa María, where it still remains located. This now 6th generation family-run business started with sherry production and later expanded into Brandy in the mid-19th century. They're known for having the richest style of all the Spanish brandies, adding specially grown and macerated plums, almonds, and other fruits and nuts to its brandies at an early stage in the maturation process. Their logo is the Toro, after the black bull, which has become a Spanish cultural icon.

Carlos I Imperial Brandy is made from 100% Airén grapes, using the traditional and artesian Arab method of copper pot still, Alquitaras, to achieve a unique eaux-de-vie. Aged through the solera system in American oak casks which previously held Osborne's Amontillado and Oloroso Sherry Wines. Holendas (spanish for Eaux-de-vie) in the soleras has been aged for more than 20 years on average.

The Flavor Spiral™ shows the most common flavors that you'll taste in Osborne Carlos I Imperial and gives you a chance to have a taste of it before actually tasting it.