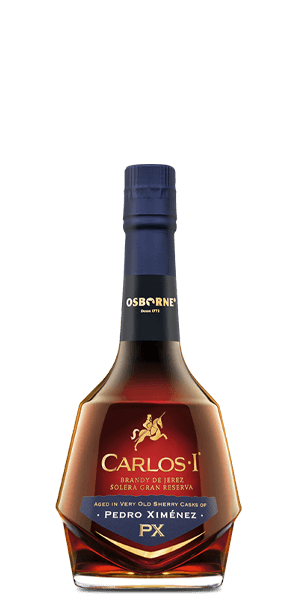 Legend has it that Carlos I has been selling Spanish Brandy since a cellar-master stumbled upon a handful of lost casks in 1889. No one knew when the casks had been filled or who had filled them. But the Brandy inside was judged as superior, and it was named after the famous Spanish conqueror Carlos the First. In 2008, the company agreed to be acquired by an even older Wine and Brandy company in Spain — Osborne. But the traditions and quality have endured.

Spanish Sherry is called a "fortified Wine" because it is Wine with aged Brandy added. Then the two are aged together in new casks. Carlos I PX Gran Reserva Brandy de Jerez is premium Spanish Brandy that has been aged in those used Pedro Ximenez (PX) casks via the Solera method. And if you remember the Solera aging technique, it’s where the casks are never really emptied completely. As Spirit is drawn out, new Spirit added so that there is always some very old Spirit in the mix. The process yields tons of complexity and incredible depth.

The Flavor Spiral™ shows the most common flavors that you'll taste in Carlos I PX Gran Reserva Brandy de Jerez and gives you a chance to have a taste of it before actually tasting it.

Nose / Aroma / Smell
The aroma is deep and rich with notes of Sherry, rancio, chocolate, almonds, and orange zest.

Flavor / Taste / Palate
The flavor profile builds upon the aromas with Rum raisin, vanilla, marzipan, and a dusting of cocoa.

Finish
The finish is medium-length, warm, and lightly sweet.

Paul, Jan 27, 2021
A slight bitter aftertaste for me. Better when it's warm but there are plenty of other brandies I would reach for before I would get this again.

guest, Dec 31, 2016
Hard to find in the States. Smooth going down and lengthy linger; great warmth after. Would purchase again!