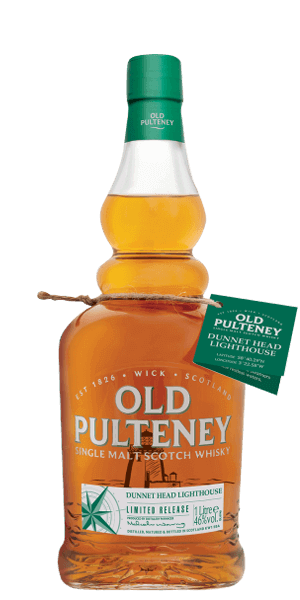 If you look at a map of Scotland, there is a little point at the top… that’s where the little towns of Wick and Pulteneytown are located, and that is where Old Pulteney Distillery calls home. Back when they built it in 1826, the only way in or out was by boat, and that was just fine because it kept the constables and tax collectors away. This is a Highland Whisky, which makes sense because if they were any higher in latitude, Santa Claus would be living next door. At last count they produced 24 different bottlings and specialty offerings — all from their classic single malt line — and have won tons of awards.

Old Pulteney has a tradition of naming Whiskies after lighthouses. This make sense with the strong seafaring tradition of the area. Sure enough, Dunnet Head lighthouse — built in 1831 — sits on a 300-foot cliff at the northern-most tip of the Scottish mainland about 20 miles away from the distillery. Dunnet Head Whisky is all about balance. It is a straight-forward, traditional Highland-style dram drawn from a combination of both American and European oak casks. The bottle it at a perfect 46% ABV with no chill filtration or artificial colors — meaning that there is nothing in the bottle but craftsmanship and love.

The Flavor Spiral™ shows the most common flavors that you'll taste in Old Pulteney Dunnet Head and gives you a chance to have a taste of it before actually tasting it.