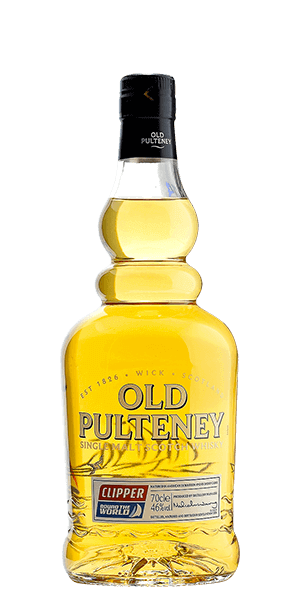 Old Pulteney Clipper is a special commemorative limited edition … once it is gone it is SOOOOO gone!


If you look at a map of Scotland, there is a little point at the top … that’s where the little towns of Wick and Pulteneytown are located, and that is where Old Pulteney Distillery calls home. Back when they built the it in 1826, the only way in or out was by boat, and that was just fine because it kept the constables away. This is a Highland Whisky, which makes since because if they were any higher in latitude, Santa Claus would be living next door.

You may not know that Old Pulteney Clipper was a special commemorative limited edition to honor the Clipper Around the World Yacht Race. Only 2700 cases of the stuff were made and they are not making any more. How cool is that? Uncle Flaviar got his hands on some of the last few remaining cases and smuggled them into the warehouse before anyone found out.

This far northern dram is a classic highlander through and through. She is aged in ex-Bourbon casks and finished in Sherry butts. So … if you are a true Whisky aficionado you already know what you’re gong to get. A lighter, fruit-forward single-malt with a crisp bite.

The Flavor Spiral™ shows the most common flavors that you'll taste in Old Pulteney Clipper and gives you a chance to have a taste of it before actually tasting it.