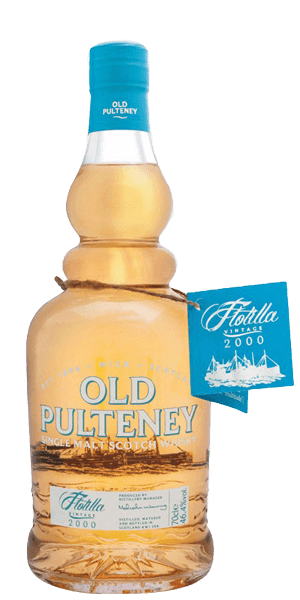 The Old Pulteney Distillery, founded in 1826 by James Handerson and named in honour of Sir William Pulteney is located in Wick, a fishing village in the far north-east of Scotland. The barley for Whisky Production at this distillery was brought in by sea, and Whisky was shipped out the same way. The location at sea gives its drams a specific characteristic from the exposure to sea air. The Old Pulteney Whisky became an important part of the Ballantine's blends.

Old Pulteney 2000 Flotilla is a part of their new range named "The Lighthouse Series" inspired by three historic lighthouses situated near the costal distillery in Wick. Each of these expressions offer a different maturation angle. The 2000 Flottilla, or the Noss Head, is matured in American Oak Ex-Bourbon Casks and aged for 12 years.

The Flavor Spiral™ shows the most common flavors that you'll taste in Old Pulteney 2000 Flotilla and gives you a chance to have a taste of it before actually tasting it.

Finish
Long, round and warm.