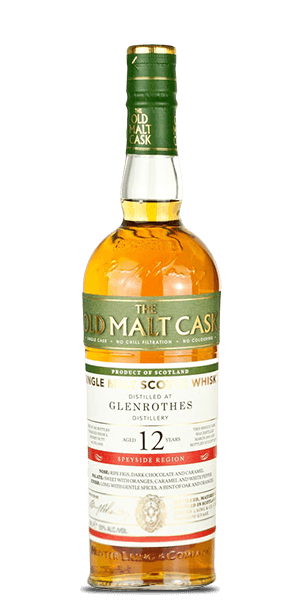 Hunter Laing have been premium bottlers for three generations since Grampa Fred founded the business in 1949. Forty years later, they introduced The Old Malt Cask brand, one of the most exclusive and high-class series of single cask bottlings. It is the go-to choice of connoisseurs of Single Malt Scotches, bringing only the best Whisky from their vast stock. And now, the line celebrates its 20th birthday.

This chic and rare Speyside Scotch (only 588 bottles made) came from one Sherry butt where it spend more than a decade from the year we all realized we love TayTay. It marks the 20th anniversary of The Old Malt Cask line and this expression is an excellent opportunity to try a Dailuaine that isn’t heavily sherried but is still true Dailuaine.

The Flavor Spiral™ shows the most common flavors that you'll taste in Old Malt Cask Dailuaine 12 Year Old 2006 Vintage and gives you a chance to have a taste of it before actually tasting it.

Nose / Aroma / Smell
Toffee and mint on the nose with a touch of milk chocolate.

Finish
Medium finish with a whisper of pepper at the end.