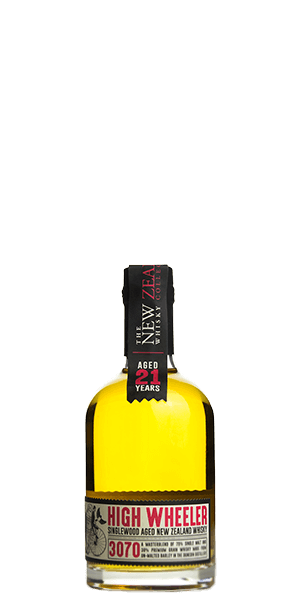 The New Zealand Whisky Company has an interesting story. The last distillery in New Zealand — the Willowbank Distillery — closed its doors in 1997. They had been caught up with mergers and acquisitions until Fosters Beer got them in a package deal and decided it wasn’t worth the trouble, selling the stills to a Rum plant in Fiji and leaving a large stock of Whisky aging in their rickhouses without a brand or market to sell to. in 2010, a group of local Whisky-loving investors bought the last remaining 443 barrels and seized upon the idea of rebottling, rebranding, and revitalizing the New Zealand Whisky industry. And things are off to a wonderful start.

High Wheeler 21 Year Old is their latest flagship release. First issued in 2016, it is a blend of 70% New Zealand Single Malt and 30% unmalted barley — thus the large number “3070” on the label. This batch has been sitting in the Dunedin, New Zealand, warehouse in ex-Bourbon casks for a full twenty-one years. It’s golden yellow hue and light, fruity character spring naturally from the barrels and grain. It’s light color and thick body almost resemble wine in the glass. It’s delicious, it's Kiwi and it's in very limited supply. (Don't get confused here, Kiwi stands for New Zealanders!)

Smartass corner:
When it was running, the Wilson’s Dunedin Distillery — the Willowbank — was the southernmost distillery in the world in the far south New Zealand town of Dunedin at nearly 56° South Latitude.

The Flavor Spiral™ shows the most common flavors that you'll taste in The New Zealand Whisky Collection 21 Year Old SingleWood Aged High Wheeler Whisky and gives you a chance to have a taste of it before actually tasting it.