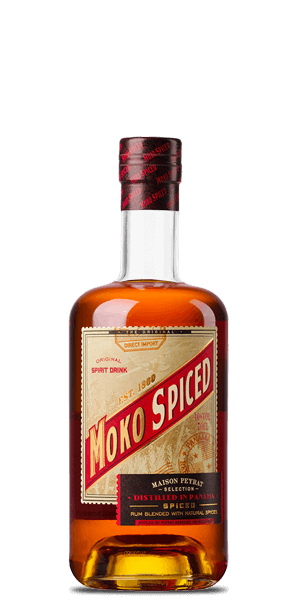 A more sophisticated spiced Rum from Panama by way of France.

The original MOKO Rum was invented by Earnest and Maurice Lasserre in 1869 — two brothers from Bordeaux, France. The Rum was a success for generations, but economics and political disruptions doomed the brand, ceasing production in 1960. Fast forward to 2017… Philippe Peyrat and his children — a direct descendant of Ernest Lasserre — and his sons Clémence and Edouard have revitalized the brand to reintroduce their legacy of Panamanian Rum to the modern world.

MOKO Spiced Panama Rum starts with their core eight-year-old Rum aged first in Panama, then transported to France to finish in ex-Cognac casks. To this central flavor profile they infuse vanilla and a classic array of natural baking spices, including cinnamon, nutmeg, and allspice. Where some lesser spiced Rums hide lower quality alcohols behind a shield of added flavorings, MOKO Spiced Panama Rum is a more sophisticated spirit build on quality.

The Flavor Spiral™ shows the most common flavors that you'll taste in MOKO Spiced Panama Rum and gives you a chance to have a taste of it before actually tasting it.

Appearance / Color
Warm Mahogany
Nose / Aroma / Smell
The aromas are full of vanilla and cinnamon and pleasant notes of caramel and pineapple.
Flavor / Taste / Palate
The flavor profile builds upon the aromas, adding banana and toffee notes with a nice spice on the back palate.
Finish
The finish is medium length and filled with warm spices.