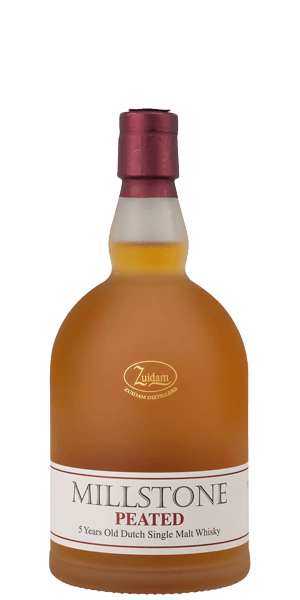 Zuidam Distillery was founded in 1975 in the Netherlands by Fred van Zuidam. The beginnings were humble and it took them over 10 years before the business started taking off – that is after his wife Helene started designing the packaging for the products. These days the distillery is run by their two sons Patrick and Gilbert, however father Fred is still involved in all recipes and mother Helene continues doing the design. They use local windmills for the production of malted barley, helping preserve an important Dutch heritage of the world famous windmills.

Millstone Peated is aged for 5 years in small American white oak barrels which previously held bourbon and sherry. It is double distilled in hand-made copper pot stills. The process of using windmills to grind malted barley into flour causes almost no rise in temperature, helping preserve the aroma.  The name (as you might have guessed) comes from the fact that millstones are used in windmills.

The Flavor Spiral™ shows the most common flavors that you'll taste in Millstone Peated and gives you a chance to have a taste of it before actually tasting it.

Rich fruitiness, pear and citrus, with some yeast and bananas. After a while some oak and a gentle peat.

Fruity, with some vanilla and oak tones. Smooth, with some honey sweetness accompanying the fruitiness. Not too peated, definitely more smoke than medicinal.

Spicy, but not very long finish, as it is fairly young whisky. We find fruity citrus and toffee tones, with some peat tones as well, especially in the back of the throat.

5 Women Who Love Whisky So Much They Make It Themselves
>>>