Distillery
Founded in 1850
Merlet is set up just outside the village of Saint Sauvant in the Saintonge region. Traditionally, the Merlet family were Winegrowers, supplying grapes to Winemakers across the region.

But in 1850, Firmin Merlet assembled the first pot still near the picturesque town of Saint Sauvant and started transforming their surplus grape inventory into fine eau-de-vie for famous Cognac producers Hennessy, Martell, and Courvoisier.

Gradually, they acquired their own aging barrels and then started bottling, thus becoming an independent producer. It’s still an all-in-the-family operation, currently going strong in their fifth generation.

Gilles Merlet took over the reins forty years ago, streamlining, modernizing, and expanding their product lines.

Now joined by his sons, Pierre and Luc, they produce their famous Cognac, Pineau des Charentes, Brandies, and Liqueurs.

Viva le Merlet! Their 100 acres of vineyards are situated both in Fins Bois and Borderies crus. Once the grapes have been harvested, they are pressed, fermented, and distilled in their Charentais copper pot stills.

The Flavor Spiral™ shows the most common flavours that you'll taste in Merlet Cognac. It's based on all Merlet drinks in our large database and gives you a chance to taste Merlet before actually tasting it.

Dog Dogson's
Smartass Corner
The growth of export for Merlet Liqueurs took place when the cocktail was experiencing a renaissance. Their fruit Liqueurs seduced the best bartenders and opened a completely new perspective for the product. They now organize their own cocktail competition, Sidecar by Merlet, in almost 20 countries. 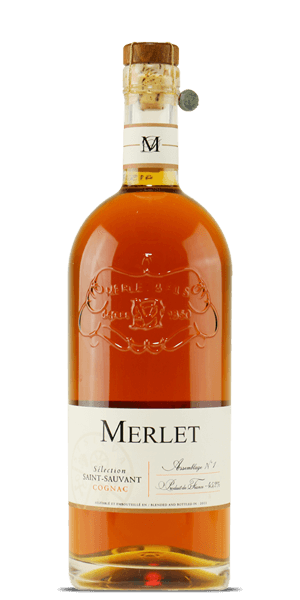