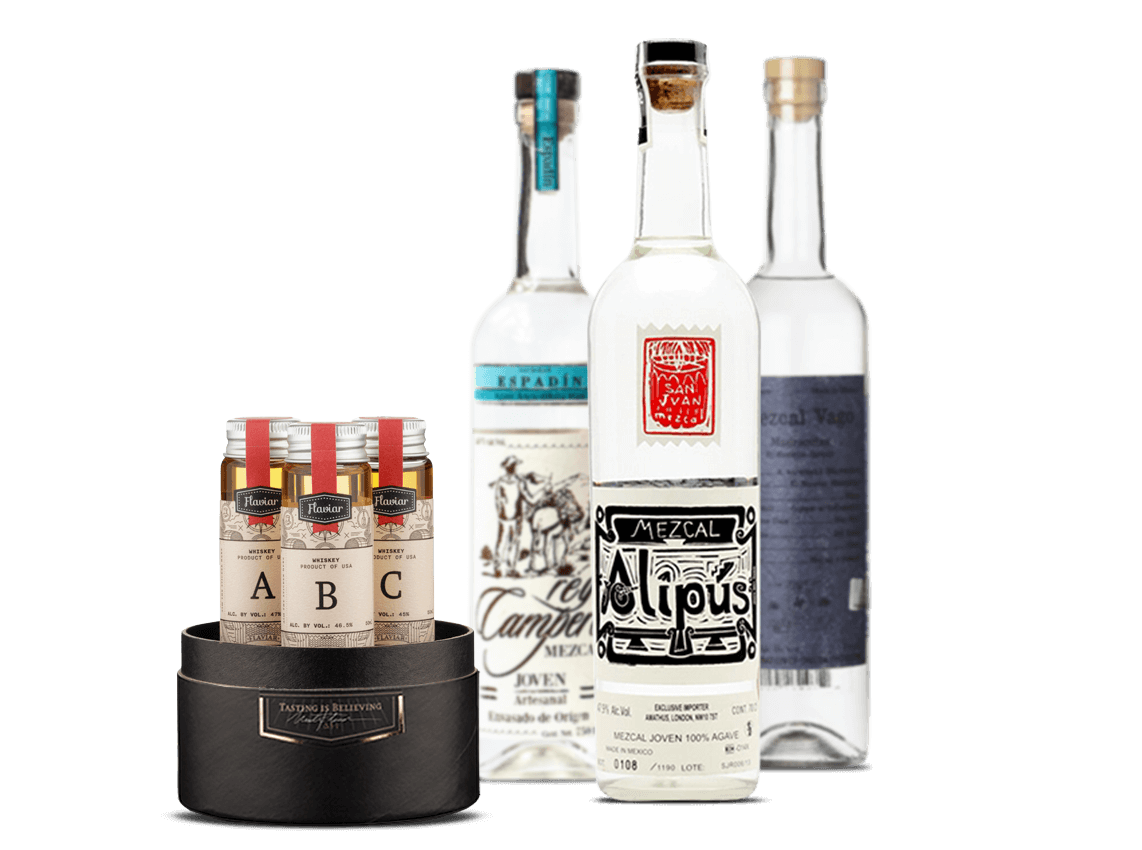 
0/10 (0 votes)
Price
$60
Get your hands on exclusive Flaviar Products, while stock lasts. As a Flaviar Member you get access to many members' exclusive benefits.

Forget the worm, forget all that "Tequila’s smoky cousin" crap. Real Mezcal is smoky but infinitely more complex with flavors that span fruity, mineral, vegetal, and more. The best Mezcals reflect their maker’s distinct philosophies and the terroir that produced them - in cooperation with our friends from Mezcalistas, we have selected some really distinct bottles to get you started - and they’re guaranteed to get all those silly ideas about worms, smoke, and Mexican stereotypes out of your head because these are true sippers to rival any Spirit in the world.
Mezcal can be made from a variety of agaves, at least more than 20, but the majority of Mezcal is made from one type of agave, the noble Espadín, aka Agave angustifolia. Espadín means sword in Spanish and the name is used advisedly because those Espadín agaves used to make this Mezcal, look exactly like a plant with a ton of swords protruding from them.
Espadín is the most sustainably cultivated agave now grown in Mexico because it grows well in a variety of conditions and is ready for harvest faster than any others. That means that you can drink it with a pretty safe conscience. That and the fact that we have selected exceptionally sustainably produced Mezcals for your tasting pleasure. Many mezcaleros prefer to use Espadín, because they know it’s sustainably farmed and because it’s such a fun raw material to work with: They get to coax the nuances of terroir from the plant just like a fine Wine. Remember that famous line from "Sideways?" "If anyone orders Merlot, I’m leaving, I am NOT drinking any fucking Merlot!" May we remind you that the humble Merlot grape is the heart of Bordeaux Wines?
We have selected this three Espadín Mezcal exactly because they are so distinct and express the diverse distilling philosophies of their maestros mezcaleros, the master distillers who made them and will give you the full spectrum tasting experience. All three are expressions of the incredible diversity of Mezcal in general so definitely sip and compare them.
If you want to taste these Mezcals like they do in Oaxaca then cut an orange into fine slices and dust it with some salt. You can sip a Mezcal then suck on the salty, sweet, citrus, umami of that orange / sal de gusano mix and really stimulate your taste buds!
Enjoy your tasting, we’ll be there with you in spirit! Remember the famous saying about Mezcal "Para todo mal, Mezcal, y para todo bien, tambien." And if you really want atmosphere play Lila Downs’ "La Cumbia del Mole!"
Salud!

3) That worm in the bottle - it’s just a marketing gimmick. Really, someone created it after the Second World War to market Mezcal and it took off a way to test the mettle of spring breakers ever after. It has no hallucinogenic effects, it just changes the flavor of the Mezcal bottle, making it more savory and woody. A few people still add worms and other insects to Mezcal bottles because it’s become a tradition of its own but most Mezcal makers don’t because they want to preserve the full flavor of the Mezcal.
4) While Mezcal is produced across Mexico most of the Mezcal we see is produced in the state of Oaxaca. And, over 70% of Mezcal is made from the Espadín agave even if more than 20 agave types are used to make Mezcal.

5) Did you know that the Mescalero Band of Apaches in New Mexico has that name because they cultivated the agave, also known as the mescal plant locally? Recent archeological findings show that this tribe grew huge fields of agave plants and used them for food.

6) In Mexico the words maguey and agave are synonymous, different words for the same plant. But maguey is a word derived from native languages while Agave was the name of Cadmus’s daughter in Ancient Greek mythology.

7) The Espadín agaves have that name not only because they look like protruding swords. The plant is just as dangerous as their metal counterparts - when cut, they bleed a sap that causes rashes in humans! Which is to say, that nice agave that you see harvested for your excellent Mezcal is nice to drink only!