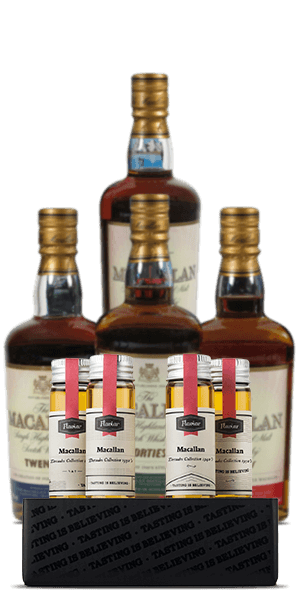 A great collection of Macallan that depicts four decades from the twenties on and presents the style of Whisky in that period. Sampled from the stock from that time master distiller matched their smell and flavour with more recent distillations from their warehouses.

Each bottle unique in its own way shows an accurate history through liquid and speaks the distillery's story.

Macallan Decades Collection 1930's
Macallan in the thirties had to revert back to drying barley with peat fires instead of coal, because of increasing industrial activity. This combined with with lack of sherry casks that came from Spain which was in civil war at that time, resulted in a peatier and less spicy Whisky than today.

Macallan Decades Collection 1940's
Shortage of sherry casks that was present in the forties because of the second world war took a great toll on the taste Macallan wanted to deliver. As they would reuse their casks multiple times and still used peat for drying their barley the Whisky was peatier compared to todays taste.

Macallan Decades Collection 1950's
In the fifties sherry casks became once again available and the sherry flavour that is a trademark for Macallan was alive once again.

The Flavor Spiral™ shows the most common flavors that you'll taste in Vault Selection XI. - The Macallan Decades Collection and gives you a chance to have a taste of it before actually tasting it.