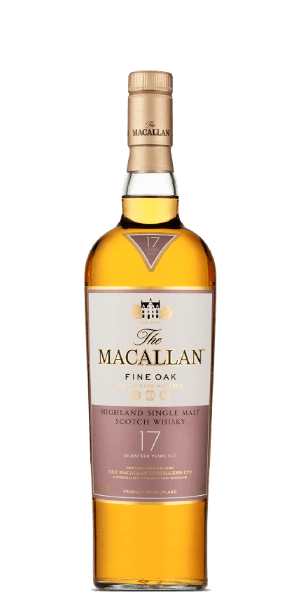 Macallan Fine Oak Scotch Single Malt 17 Year is as good as any in the world — refreshing and brisk, almost cooling, and perfect to sip on a summer evening.

The Macallan is one of the "Big 3" distilleries in Scotland, and, fortunately for us, they have achieved this scale without sacrificing quality. A recent change in UK labeling laws aced them out of their "Speyside" designation. But just because the Lords and Ladies of British Parliament gerrymandered the "official" boundaries doesn’t mean whiskey-lovers have to pay any attention. We consider them a Spey in all the best ways.

The Macallan was founded in 1824 by Alexander Reid, a barley farmer and school teacher. And The Macallan has been schooling other Whiskies ever since. Their innovations and achievements are far too numerous to list here — including setting the record price ever paid at auction for a single bottle of Scotch. They produce a wide and deep range of Single Malt Whiskies and every single one of them is as good as any in the world.

Have you tried the Macallan Fine Oak range yet? If you are a fan of The Macallan — and there are a lot of us — you might expect the Fine Oak series to share the darker color and sweet Sherry character of their core single-malt. Macallan Fine Oak Scotch Single Malt 17 Year is the same, but different, and it is a difference to savor.

The entire Macallan Fine Oak line is "triple wood" aged — meaning that they blend their signature malt aged in three cask types: the traditional Spanish Sherry casks,  American Bourbon barrels, and American oak Sherry casks. This results in a Whisky that is a bit less sweet and is lighter in color than it’s better-known siblings. And the 17YO is one of the most highly regarded of the line — refreshing and brisk, almost cooling and perfect to sip on a summer evening. So if you haven’t tried Macallan Fine Oak Scotch Single Malt 17 Year yet, what’s stopping you?


Smartass Corner
The "Big 3" distilleries in Scotland are #1 Glenlivet, #2 Macallan, and #3 Glenfiddich. Together, they produce nearly 20 million bottles of Whiskey per year — mostly used in their individual single-malt offerings.

The Flavor Spiral™ shows the most common flavors that you'll taste in The Macallan 17 Year Old Fine Oak and gives you a chance to have a taste of it before actually tasting it.

Andrew, Jan 15, 2021
An excellent Macallan. Softer and a longer finish than the younger ones, but without as dominant a single note. Lingering and smooth. More reserved and mellow than the Sherry Oak or Double Cask 18's

Eric, Nov 30, 2020
One of my fave Macallan bottles. Have 3 more and cant wait to open another one for a special occasion.

Adam, Apr 27, 2019
What is there to say? The macallan is a fine scotch with an incredibly smooth finish.

Kevin, Sep 10, 2018
Nose-Light peat, citrus, honey, floral Taste-balanced, light, dry, light smoke and a hint of wood. Finish- medium-long and the taste carries all the way through. Honestly I am on the fence about this one. It’s very well balanced and the flavor is excellent but because it’s so light I would need to be in the mood for it. It’s not just weight of the spirit on the tongue but the flavor is light as well. I could see this being a late summer or early fall scotch. It’s worth trying for sure and this is one bottle that has received a coveted spot in my cabinet. The question remains if it keeps that spot once it’s empty. They discontinued this particular spirit so perhaps not if the price goes up.

Aash, Feb 27, 2018
Amazing. Wife got it for me for the Holidays and taking my time drinking. Soft subtle. Not harsh

Kevin, Feb 5, 2016
Prohibitively expensive, but a lovely experience with a single drop and allowed to open up in a covered glass for 3 minutes.

guest, Dec 4, 2015
It has a nice warm sense, with a subtle smokiness to it. Very fine scotch If I do say so myself!