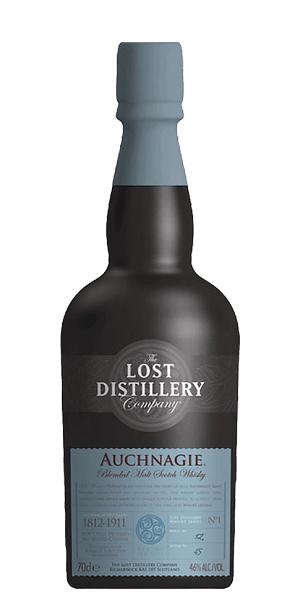 The pride of Perthshire lives again.

Over the last 100 years, more than half of all of the distilleries in Scotland were abandoned. This is where the Lost Distillery Company comes in. Their logo is a Celtic triskele — an ancient symbol of life and renewal. They actually have an “archiving team” that researches extinct Whiskies based upon 10 elements of production. They use this info to reproduce Whiskies now long gone… to great effect. So far these modern alchemists have “resurrected” 6 Whiskies and we get the impression that they are not done yet.

Auchnagie began as a remote farmhouse in 1812 in Perthshire, the Highlands. Today we would call them a “micro-distillery,” but back then it was just a way of life. Production there saw a stormy history since they relied on small, local streams for both water and power, so dry years meant Whisky production ceased until the rains returned. For years their sweet, signature single malt was the jewel of the central Highlands. Changing tastes and intrusive laws sealed their fate in 1911, but The Lost Distillery Company have faithfully reproduced this signature Highland spirit — light and fruity with a warming spice and bottled at 46% ABV.

The Flavor Spiral™ shows the most common flavors that you'll taste in The Lost Distillery Auchnagie Blended Malt Scotch Whisky and gives you a chance to have a taste of it before actually tasting it.

William, Oct 24, 2018
I now have a blend I can enjoy and probably stay with for a while

Levi, Sep 16, 2018
Surprisingly smoky for how light it is. Very nice blend with the Vanilla notes.

Carlos, Aug 5, 2018
Very enjoyable bottle, loved the sweetness it gave, almost like a sugar cookie flavor to it. A must try!