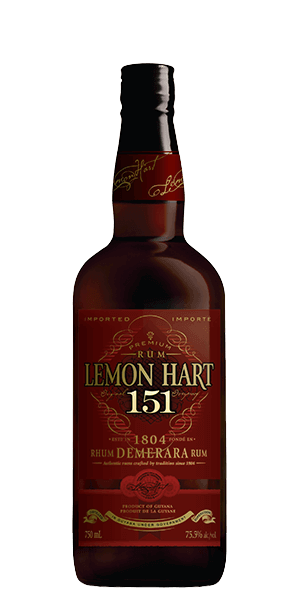 The next time you get a sit down for a Rum cocktail at Trader Vics, you better bet that the legendary Lemon Hart 151 is the float.

No, Lemon Hart Rums don’t taste like lemons. Lemon was the nickname of the founder, Leyman “Lemon” Hart, a savvy and gregarious businessman 200 years ago who built his Rum business through a passion for life, love, and adventure. This guy makes today’s extreme sports fanatics look tame. He fronted expeditions to the Caribean and started a local militia to fight off Napoleon’s invasion, among other achievements. The one we care about right now is that he was the official Rum-supplier to the Royal Navy.

Lemon Hart Rum produces three varieties: The Original, 151, and Navy Spiced. All of them are Demerara Rums from Guyana and all are sought after by those in the know for drinking straight and mixing into classic cocktails.

The good folks at Lemon Hart are sooooo particular about their products that they sometimes just run out. That happened last year in 2014. Demand was so high and the supplies of the “good stuff” was so low, they just said “mahalo" and stopped shipping until production caught up with the next year’s harvest. Don’t you just love that? The point is, get yourself a few bottles of this genuine 75% ABV, Caribbean classic while you can.

“Back in the day, Trader Vic, Don the Beachcomber, and I got together for a BBQ. Vic tended bar as usual and mixed up a batch of Mai Tais for us with Lemon Hart 151. People always ask how the three of us got those matching tattoos.”  — Uncle Flaviar

The Flavor Spiral™ shows the most common flavors that you'll taste in Lemon Hart 151 Demerara Rum and gives you a chance to have a taste of it before actually tasting it.

Kenneth, Jul 28, 2016
Excellent high proof rum with a bold taste. So upset that we can longer get it here in Massachusetts because of the crooked distributing system here.