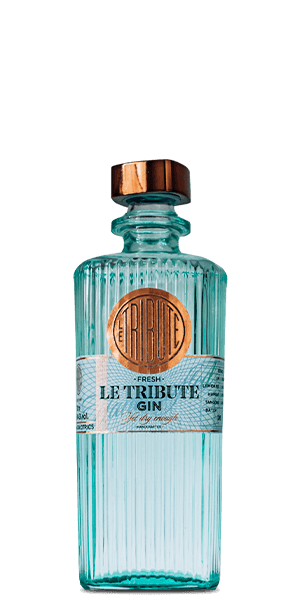 A Gin as bright and refreshing as the Spanish coast it came from.

MG Destilierias began in 1835 as a small beverage company based in Barcelona, Spain, making flavored syrups and natural Horchata. By 1880 they had expanded to distilled Spirits and Liqueurs. Their first Gin came along in 1940, and their first Whiskey in 1965. They have continued to expand across the map through organic growth and strategic acquisitions to support a series of global brands and Spirits of every type.

Le Tribute is a line of premium Spirits in the MG Destilierias portfolio spanning a range of categories. Le Tribute Gin is their flagship product for the line and it is very highly regarded. And they are remarkably up-front about the botanicals they use. In addition to juniper, they use two varieties of oranges from Valencia, lemon from Seville, three varieties of grapefruit, Kumquat, mandarin oranges, lime, lemon grass, and ginger — each individually distillation-infused. It is bottled at 43% ABV in a decanter shaped like an antique medicine bottle. And the doctor says to take two shots and call him in the morning.

Smartass Corner:
Horchata is a milky, Mediterranean beverage from antiquity. The name likely comes from a latin root word for barley. It’s plant-based and traditionally made from tiger nuts or grains. Usually sweetened and often spiced, it is available across Latin America and North Africa.

The Flavor Spiral™ shows the most common flavors that you'll taste in Le Tribute Gin and gives you a chance to have a taste of it before actually tasting it.

Nose / Aroma / Smell
The fragrance is bright and fresh with a light tartness.

Flavor / Taste / Palate
This is a summery Gin with tingly notes of citrus perfectly balanced between the sweet, the tart, and the lightly sour.

Finish
The finish is brisk, clean, and refreshing.