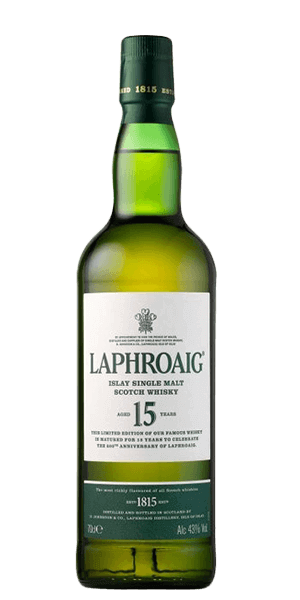 Laphroaig distillery was founded in 1815 by Donald and Alexander Johnston and is located in Port Ellen, Isle of Islay. Laphroaig is famous for producing some of the smokiest Whiskies in the world with a distinct flavor, in huge part influenced by the vicinity of the coast and the high moss content of its peat. We’re talking about Whisky royalty right here, so it’s no wonder this is also the favorite of Prince Charles, who gave Laphroaig permission to use his royal warrant on all the bottles.

Speaking of the heir to the British throne - you want to know which Laphroaig particularly was his favorite? It is the 15-year-old, yes Sir. Once upon a time the flagship expression of the vaunted establishment, it has been discontinued in 2009, but to the delight of Whisky fans around the world makes a reappearance as Laphroaig 15YO 200th Anniversary for a limited time only, as part of the bicentennial celebrations of the distillery.

For those of you, who expect a wild rapacious Laphroaig in the bottle, be prepared for a lighter, more elegant expression. The same mellow, peaty flavor that made a hit 30 years ago and gained all those praise and awards throughout the past decades is back. It is made in the same way as the original, where selective casks with particular qualities are hand-pick to provide the special flavor.

The original 15YO is extremely rare, a true Whisky treasure and of course priced accordingly. So here’s your chance to grab a bargain, one of the most sought-after bottles of the year and a piece of history to boot.

The Flavor Spiral™ shows the most common flavors that you'll taste in Laphroaig 15 Year Old (200th Anniversary Edition) and gives you a chance to have a taste of it before actually tasting it.

Nicholas, Jan 2, 2017
Exceptional. I love the Laphroaig 10 year old but this is something very different. You have powerful yet delightful smoke, not as much as a 'punch in the mouth' as the 10, yet no less a Laphroaig.

Alec, Nov 24, 2016
I was worried the phenols would be far too strong on this, similar to a Lagavulin 16, but when I opened the bottle and tasted a few sips it was amazing. The smokiness is very smooth and mellow, fresh Granny Smith apple shows with a bit of a caramel undertone, at least for me. The phenols come in on the background with a touch of peat at the end. Really outstanding stuff.

Brian, Sep 21, 2016
Laphroaig 10 Yr is my favorite go to Islay Single Malt dram and the 15 Yr 200th Anniversary Edition is a SPECIAL Treat even more of what makes the 10 Yr so drinkable. Citrus & Earthy Peat Smoke on the Nose with just a touch of the briny sea becomes even fuller adding in the carmel, vanilla and toffee notes from the oak when opened with a few drops of water. Wonderful smooth flavor and full mouthfeel with a surprising upfront sweetness followed by a rolling finish of flavors revealed in the nose, ending with delicious light smokiness...just right

Gene, Sep 18, 2016
A nice finish and the solid peat smokiness completes this fine whiskey, it just a little less smooth than its excellent older brother, the 18 year and a little easier to find.

Wes, Aug 12, 2016
I did not like this at all and would not recommend to anyone. I still have the bottle if anyone is interested.
Load more reviews