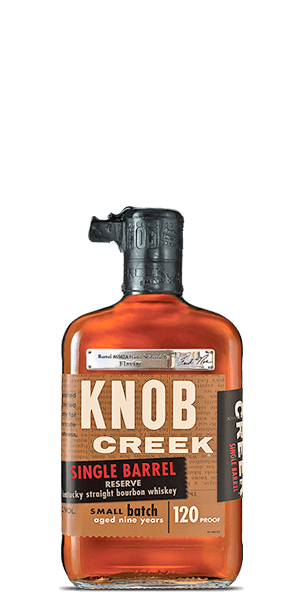 The Knob Creek comes from a very famous family, the Beam Suntory dynasty, which is mostly known for Jim Beam. The Knob Creek has been around since 1992, but their Single Barrel reserve was first released only in 2010. It's like the Beam's popular Straight Bourbon, but much, much more intense and unique. There's no years grain bill or aging, since it's barreled for nine years, which means it's as pure as they come.

Every bottling has its unique shade of wonderful and rumor has it you're quite in luck! Why? Well, let's say we pulled some strings and got ourselves 152 bottles of this precious liquid. Flaviar Master Barrel Collectors went through Knob's barrels and decided the No. 6562A is the lucky one. It's bottled at 120 proof and we promise its aroma and flavors will justify its exclusivity.

Dust off your favorite recliner, unwrap a nice cigar and have yourself a special dram. Either straight or in a lavish Manhattan cocktail. Your call... This is a Kentucky Straight Bourbon you’ll want to own. Your guests will be taken aback.

The Flavor Spiral™ shows the most common flavors that you'll taste in Knob Creek Flaviar Single Barrel Bourbon 2018 and gives you a chance to have a taste of it before actually tasting it.

Nose / Aroma / Smell
Sweet aromas of caramel and brown sugar with notes of toffee and apple. Spicier touch than other Bourbons.

Flavor / Taste / Palate
Surprisingly sweet, rich and creamy on the palate with flavors of vanilla, brown sugar and maple syrup.

Finish
Long and hot finish with an aftertaste of cinnamon, oak, and leather.

Jonathan, Apr 17, 2020
Smooth for the high-proof, butterscotch and vanilla flavors on the palate. Finish evolves and has flavors of tobacco (think unlit cigar) and cinnamon spice. Knob Creek Bourbon was created by Beam’s grandson, Booker Noe, who after joining the family business in 1950 was promoted to Master Distiller just ten years later. Booker talked like a true Kentuckian and was known for his contagious personality, and through his launch of the “Small Batch Bourbon Collection” — the collection includes Knob Creek as well as Basil Hayden’s, Booker’s and Baker’s bourbons — he is often credited as the father of the small batch bourbon movement. Knob Creek Bourbon takes its name from the small water source, Knob Creek, that ran through President Abraham Lincoln’s childhood farm. Booker’s vision for Knob Creek Bourbon was that of an honest, quality bourbon that could meet the standards — strength, flavor, care and patience — of bourbon made before prohibition distressed the industry just decades earlier. Like Abraham Lincoln himself, Booker designed Knob Creek Bourbon to be honest, unwavering and full of character. While most bourbons are blended together from multiple barrels to ensure consistency of flavor, Knob Creek Reserve Single Barrel Bourbon is bottled from single casks, hand-picked based on their final age, rack placement and other proprietary methods passed down for many generations. Aged for a minimum of nine years and bottled at a robust 120 proof.

Dmitriy, Nov 30, 2019
Im not a big fan of bourbon, but this one made me change my mind. Wow. Beautifull spirit with a very fruity taste. Not what you would expect of a 100 proof whiskey. Soooooooo good.

Art, Feb 17, 2019
Lots of flavor! Just wait a minute for a little ice to melt and this one will reward tenfold! So smooth but yet so powerful!

Pete, Feb 1, 2019
This is a little rough for a sipper. Great in a cocktail, however. Very classic bourbon flavors of oak, caramel and vanilla, but a disappointingly short finish and very little oak beyond the initial sip. Fairly easy to drink for a high ABV whiskey. If it were about $10 cheaper I'd recommend this one. Otherwise, there are plenty of better bourbons for the price.

Alex, Nov 27, 2018
A rich flavor with intensity! At 120-proof it brings the heat. It offers a warming effect followed by an enjoyable lasting finish.

Michelle, Oct 21, 2018
Love it. Very sharp. Makes my lips numb. 1 ice cube changes this to the perfect sipper. Take it easy, though... nice, smokey taste. A little bit of pecan or maybe caramel in the background

Dale, Aug 30, 2018
This is a drink of choice especially when I want to pamper myself
Load more reviews