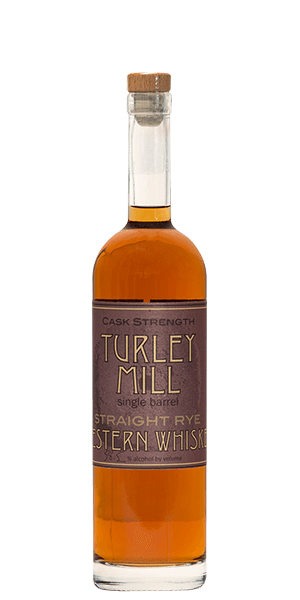 A man’s drink that pulls no punches.

“KGB” Spirits is NOT from Russia. They were founded on May 1, 2012, in Santa Fe, New Mexico. They submitted their first few creations to the San Francisco World Spirits Competition that same year — that takes some stones, don’t you think? But they took home a handful of medals anyway. A few online lists have even named them one of the top craft distillers in America. Not bad, right? In just five years they have grown to a family of seven spirits, including Vodka, Absinthe, Gin, Three Rye Whiskies, and an Orange Liqueur.

Back in 1820, Simeon Turley distilled “Taos Lightning” in Arroyo Hondo, New Mexico. He made a good living at it… until he was killed during the Taos Revolt of 1847. KGB has named Turley Mill Straight Rye Whiskey after this local folk hero. And this is SERIOUS stuff. It’s a cask-strength, 95% “High Rye” Whiskey issued in single-barrel lots — so each release is less than 200 bottles and has a slightly different age and proof. The actual age and strength are hand-written on each bottle. That means anywhere from four to five years of aging in new charred oak and from 57.5% to 64% ABV.

We almost never advocate for extra ice or adding water, but in this case….

The Flavor Spiral™ shows the most common flavors that you'll taste in Turley Mill Single Barrel Straight Rye Cask Strength Whiskey and gives you a chance to have a taste of it before actually tasting it.

Eric, Sep 17, 2018
Unexpectedly different for a CS MGP rye. If you like MGP rye, this is a delightful twist to the norm. Not heavy on the dill. Has flavors of delicate oak and lemon pepper. Tastes like sunshine in a bottle!